Smithfield Market was blocked by Animal Rebellion and transformed into a vegan market. 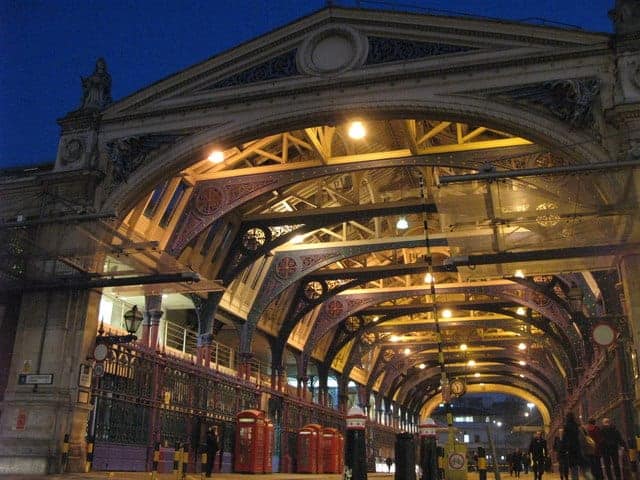 The UK’s biggest meat market was blocked by Animal Rebellion – an offshoot of the climate change protest group – and transformed into a vegan market.

There were also dozens of tents, with banners pinned to the gates demanding a “plant-based food system”.

Another protester was pictured wearing a hoodie with the words “tofu never screams”.

Putting us out of work

But traders were reportedly unable to work this morning.

Speaking to LBC, “Perry the Bone Ma” said: “We haven’t caused the problems around the world with whatever they’re talking about. It’s not caused by us working people, it’s caused by governments.

“Why are they coming to demonstrate against us, possibly putting us out of work?”

Protesters, however, stood resolute, saying they were well aware of the disruption they would cause.

One tweet posted just before 6am on Tuesday read:

“For those of you replying to our tweets assuming we either didn’t know Smithfield’s opening hours or were scared of being here with the workers: the plan was always to be here all night.

“And here we remain.”

Smithfield (the UK’s biggest meat market) has been transformed overnight by climate activists into a ‘plant-based’ market.

Instead of cuts of meat you’ve got apples, rhubarb and onions in the stalls – and some furious traders outside who haven’t been able to work a shift. @LBC pic.twitter.com/v0LIIY5UN9

Dubbing Extinction Rebellion activists as “uncooperative crusties”, the Prime Minister called on them to abandon their “hemp-smelling bivouacs” to allow the capital to function smoothly again.

Johnson was speaking at the launch in London of the third volume of Margaret Thatcher’s biography by the former editor of The Daily Telegraph, Charles Moore.

He said the former prime minister had taken the issue of greenhouse gases seriously long before 16-year-old Swedish activist Greta Thunberg was born.

“The best thing possible for the education of the denizens of the heaving hemp-smelling bivouacs that now litter Trafalgar Square and Hyde Park would be for them to stop blocking the traffic and buy a copy of Charles’s magnificent book so that they can learn about a true feminist, green and revolutionary who changed the world for the better,” Mr Johnson said.

He added: “I hope that when we go out from this place tonight and we are waylaid by importunate nose-ringed climate change protesters, we remind them that she (Mrs Thatcher) was also right about greenhouse gases.”