Researchers say the number of deaths due to conflict and rioting caused by food, water and fuel shortages is likely increase rapidly over the next 10 years 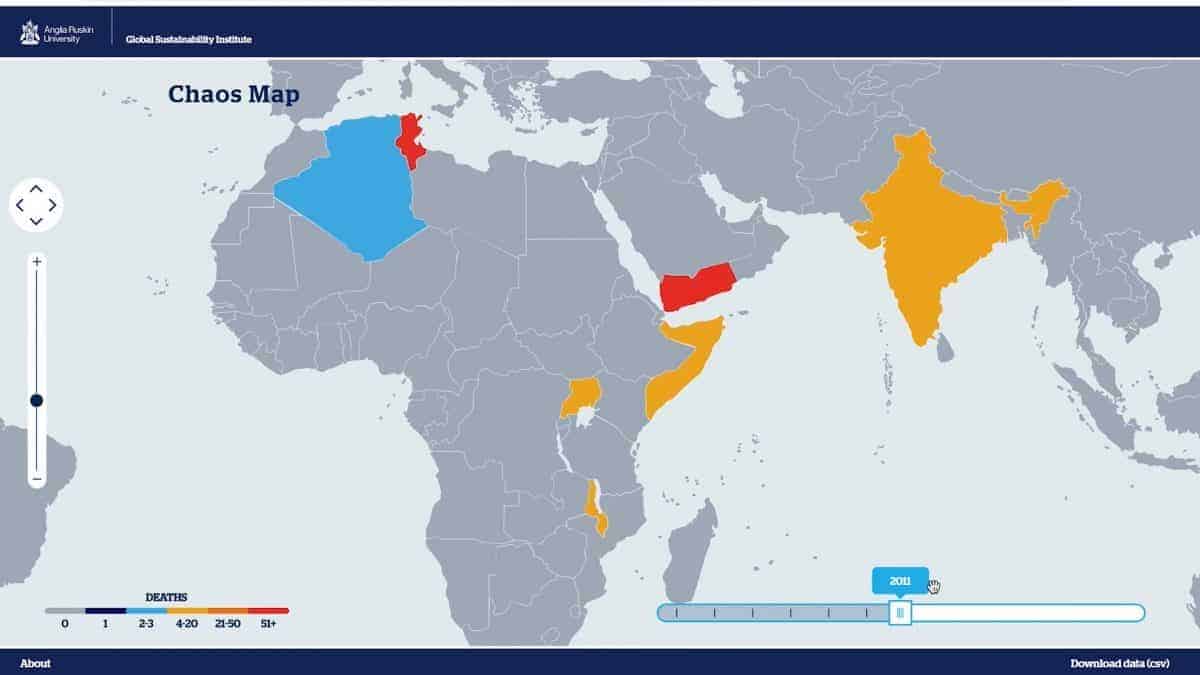 Violent deaths linked to price rises will “soar” around the world – including in Europe – over the next decade, warns a major new study.

Researchers say the number of deaths due to conflict and rioting caused by food, water and fuel shortages is likely increase rapidly over the next 10 years.

They have created a new interactive tool, called the Chaos Map, that records fatalities linked to price rises and resource shortages.

Produced by Dr Davide Natalini and Professor Aled Jones of Anglia Ruskin University, the map shows that more than 1,300 deaths between 2005 and 2017 have been the result of violent unrest directly attributable to either food, water or fuel insecurity.

And the academics believe the figures could soar in the next decade.

By scanning reports covering food, water, and fuel insecurity shocks published since 2005, the team have plotted data for violent deaths – including riots, looting, armed conflict and demonstrations – and suicides on the Chaos Map.#

They say their research is important to help understand the “escalating instability and chaos” that can occur when pressures caused by limited resources are compounded by factors such as climate change and rising populations.

By examining trends around previous events, the researchers say the Chaos Map can also help to predict and inform early responses to resource insecurity and social unrest, which could prove useful for governments and NGOs.

For example, they said the deaths over the last few months linked to rising fuel prices in Ecuador follow previous, similar patterns where austerity measures imposed on the government takes precedent over medium term planning for access to food and fuel.

Prof Jones said: “As climate change increases the severity of extreme weather over the coming years and we see continuing political instability in key oil producing regions, there is likely to be an increased frequency and severity of physical shocks to our food, fuel and water supplies.

“Without proper strategies to combat these shocks it is likely that reactive policies from governments will only make the impacts of these shocks worse, leading to bigger chaos events and more deaths.

“In Europe, while we have already seen a limited number of deaths, without a full and transparent conversation between governments and its citizens around the need to move away from fossil fuels and more investment into resilient food and water systems, it is likely that we will not be immune to these events.

“It is difficult to pinpoint exactly what causes protests about rising fuel or food costs to turn violent, and this is where the risks lie.”

Prof Jones, director of Anglia Ruskin’s Global Sustainability Institute, added: “We hope the Chaos Map can build our understanding of these tipping points in society so we can hopefully avoid the worst impacts in the future.”