Scottish Parliament bosses have been urged to rethink spending £80,000 on using birds of prey to scare away pigeons after their effectiveness was called into question. Hawks and falcons are brought in regularly to fly over the Scottish Parliament building to deter pigeons from making it their home. But MSPs say that the unwanted birds […] 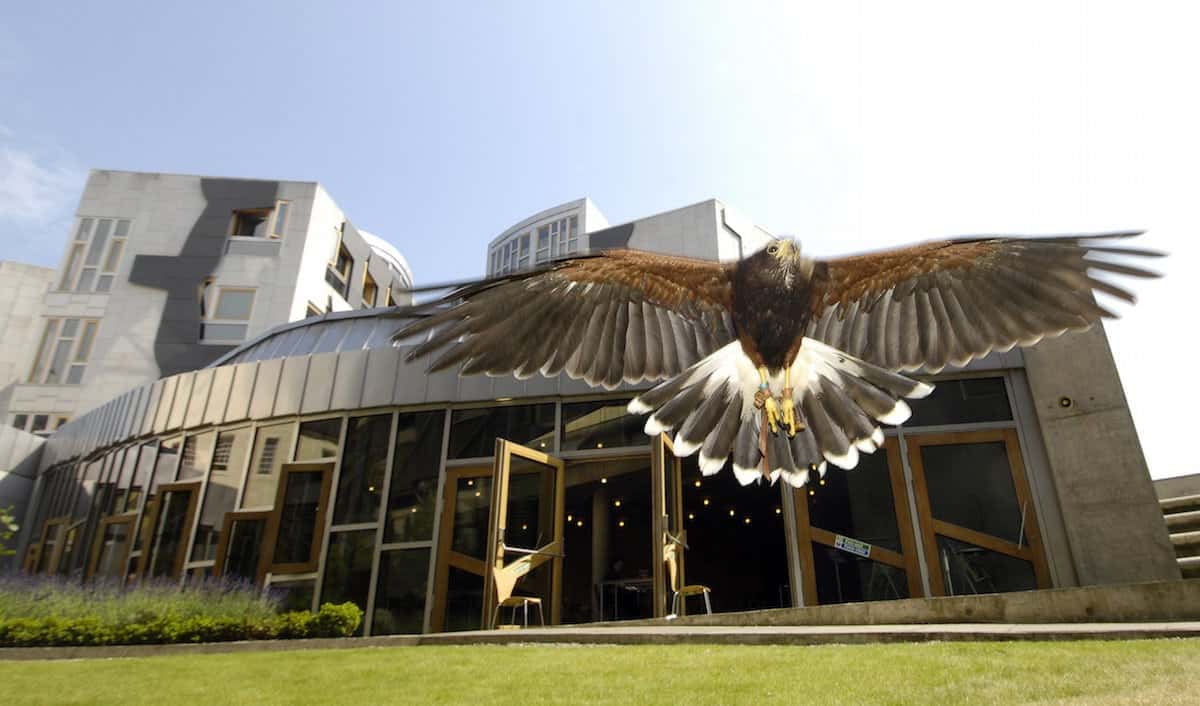 Scottish Parliament bosses have been urged to rethink spending £80,000 on using birds of prey to scare away pigeons after their effectiveness was called into question.

Hawks and falcons are brought in regularly to fly over the Scottish Parliament building to deter pigeons from making it their home.

But MSPs say that the unwanted birds have gotten wise to the scheme and simply wait for them to be taken away by their handler before settling back on the roofs and ledges of the £414 million building.

The parliament has renewed its maintenance contract – which includes an £80,000 on the birds of prey – for another five years with a possible two-year extension.

It is believed that pigeon numbers are low as they are likely to go but the parliament believes the hawks and falcons are necessary to stop them increasing again.

Lothian Tory MSP Miles Briggs, a member of the cross-party animal welfare group at Holyrood, said it was time to reconsider spending so much money on the bird handler.

He said:”I don’t think they have looked at how effective it is actually being.

“For a lot of building users it has become a bit of a joke. The pigeons are sitting up on Arthur’s Seat waiting for him to go away.

“The pigeons seem to be quite bright. The effectiveness of him turning up now and again is questionable at least.”

The Holyrood building was plagued by pigeons even before it officially opened in 2004.

Muck and feathers were blown through vents onto researchers’ desks and some birds even got into MSPs’ offices.

The cross-party Scottish Parliamentary Corporate Body, which oversees the building, brought in birds of prey as a deterrent nine years ago.

Mr Briggs said: “When the MSP office block was first built there were so many nooks
and crannies it was like a massive pigeon loft, but that has all been netted off now.

“That probably had more effect displacing the pigeon population than the man
coming to fly his birds of prey.

“The corporate body needs to review this decision and whether it’s an effective use of taxpayers’ money to have the man coming with his birds of prey.

“The pigeons seem to have got wise to it.”

Monthly reports by the contractors to the Scottish Parliament claim between 50 and 65 per cent of pigeons are dispersed during their presence on site.

But the numbers seem to return to roughly the same level after they have gone.

A parliament spokesman said: “Like many buildings in Edinburgh, a small number of pigeons visit regularly.

“We are aware the problem can never be fully eradicated and we will continue with the current approach.”

The idea of trapping pigeons as a way of cutting the numbers has been ruled out.

Five of the contractors’ monthly reports – from January to May – recommended: “Trapping of birds can also be considered to further reduce numbers on site.”

But any reference to trapping was then dropped from later reports.

A parliament spokesman said: “We have no plans to use traps.”