Musk was swiftly denounced for minimising the horrors of Nazism with tweets in support of Canada's protesting truckers. 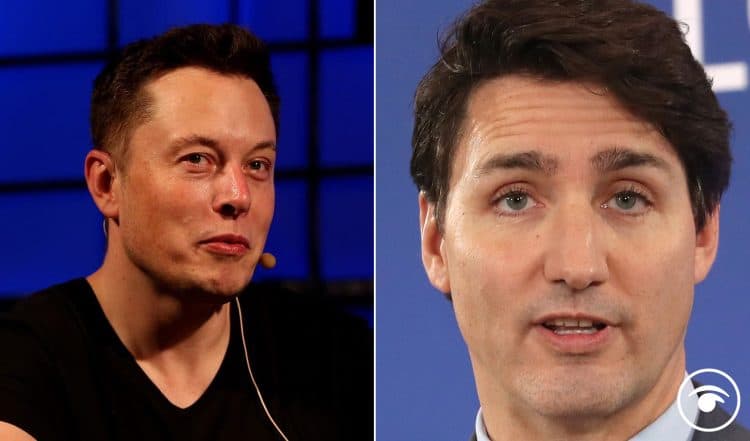 The Tesla and SpaceX founder posted an image of the Nazi dictator overlaid with text reading, “stop comparing me to Justin Trudeau. I had a budget”.

Musk, one of the world’s richest men, shared the member in response to an article from a cryptocurrency news site, which detailed Trudeau’s order to sanction crypto wallets in response to the trucker protests that have ground Canada to a halt.

Trudeau’s use of emergency powers in an attempt to break the blockade have attracted the ire of American conservatives, who have cheered on the protests from afar and encouraged similar demonstrations across the US.

Under new powers, the Canadian government will be able to take dramatic action to remove the truckers – including by conscripting tow-truck drivers to haul the trucks off city streets.

Musk is one of many to cheer on the protests. In the early days of the demonstrations, he tweeted: “Canadian truckers rule!”

But his latest attempts to troll Trudeau quickly came under fire from Jewish groups, who criticised his comments for undermine the evils of Nazism.

In a statement, the American Jewish Committee said: “[Elon Musk] has exercised extremely poor judgment by invoking Hitler to make a point on social media. Comparing @CanadianPM Justin Trudeau to a genocidal dictator who murdered millions is not an appropriate way to criticise policies. He must apologise immediately.”

It is far from the first time Musk has attracted controversy on social media. In 2020, he referred to Covid-induced stay-at-home orders as “fascist” – and referred to politicians as “forcibly imprisoning people in their homes against all their constitutional rights”.

Canadian police have now arrested two protest leaders in Ottawa and threatened to break up the nearly three-week protest against Covid-19 restrictions.

‘Hit me with pepper spray’

Busloads of police arrived near Ottawa’s Parliament Hill, and workers put up extra fences around government buildings. Police also essentially began sealing off much of the downtown area to outsiders to prevent them from coming to the aid of the protesters.

“The action is imminent,” said interim Ottawa Police Chief Steve Bell. “We absolutely are committed to end this unlawful demonstration.”

Police arrested organisers Tamara Lich and Chris Barber around Parliament Hill, but officers were not moving in force on the demonstrators. Police took Lich into custody late Thursday.

Police continued negotiating with the protesters and trying to persuade them to go home, Chief Bell said. “We want this demonstration to end peacefully,” he said, but added: “If they do not peacefully leave, we have plans.”

Many of the truckers in the self-styled Freedom Convoy appeared unmoved by days of warnings from police and the government that they were risking arrest and could see their rigs seized and bank accounts frozen.

“I’m prepared to sit on my ass and watch them hit me with pepper spray,” said one of their leaders, Pat King. As for the trucks parked bumper-to-bumper, he said: “There’s no tow trucks in Canada that will touch them.”