It comes as reports suggest Dominic Raab stayed on holiday two days after being told to return to deal with the Afghan crisis. 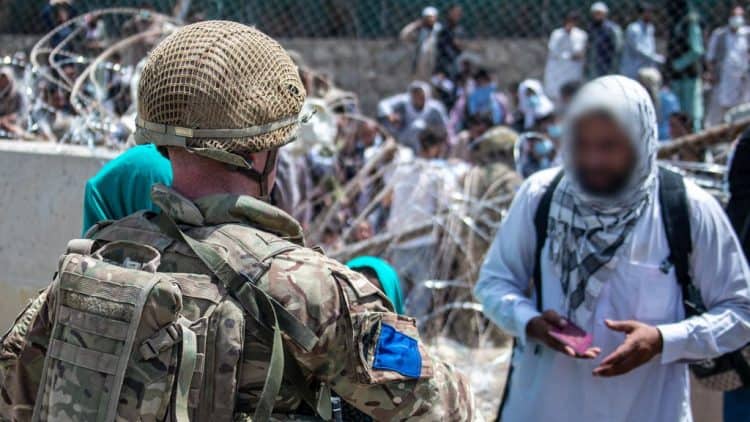 Dominic Raab has been urged to step up protection for Britons and Afghans eligible to come to the UK after claims they had been “shot at, beaten and raped” as they queued to be evacuated at Kabul airport.

It comes as the Foreign Secretary faced further revelations about his decision to remain on holiday while the Taliban advanced on the Afghan capital, with claims he stayed abroad despite being told to return to the UK.

According to the Sunday Times, Mr Raab was ordered home from his trip in Crete by Downing Street on August 13 but stayed for two more days at his five-star hotel on the Greek island because Boris Johnson told him he could.

The newspaper quotes a senior government official as saying there was a “sense of disbelief” in No 10 when the Cabinet minister was not present in person for talks on Sunday, adding: “He seems to have nobbled Boris after he was told to come back.”

The Foreign Secretary returned to the UK on Monday after Kabul had fallen to the insurgents.

The scene at Kabul airport several hours ago per source from an NGO who is trying to get people out. Main problem is that it's impossible to pass the gates and get to the planes even if you are on an evacuees list pic.twitter.com/b3bZn5B34Z

The Prime Minister has already had to give Mr Raab his backing once after he found himself in the firing line over his handling of the unfolding situation.

It emerged he delegated a call about repatriating Afghan interpreters, while away on August 13, to a junior minister – a decision that resulted in the phone conversation with the Afghan foreign minister not taking place and possibly delaying taking them to safety.

There were more embarrassing reports for the Foreign Office on Saturday, on a day when the situation in Afghanistan worsened, with Sky News reporting that Lord Ahmad of Wimbledon, the minister directly responsible for south Asia, was also on leave until Sunday enjoying a break in Britain.

A Foreign, Commonwealth and Development Office (FCDO) spokeswoman said: “Lord Ahmad has been working closely with the Foreign Secretary and the FCDO team throughout the response to events in Afghanistan, including engaging with international partners.”

It comes amid worrying reports about the treatment of Britons and Afghans who supported UK efforts in the country who are trying to escape.

Shadow foreign secretary Lisa Nandy shared a letter on social media that she had sent Mr Raab about the “crisis” facing evacuees as she sought additional assistance for those on the ground.

The senior Opposition figure said Labour MPs had been hearing of people being “shot at, beaten and raped” while they wait to be called forward at the airport, while the Baron Hotel in the city, where many British nationals are being told to travel to for processing, is being blockaded by the Taliban.

Ms Nandy asked whether Nato allies could put in place a “military policing operation” at the gates of the airport or within the internal processing zone to protect those waiting.

She also called for “safe corridors” to be implemented to allow those outside Kabul who are looking to reach the UK to travel to the capital without fear of interference from the militants.

Meanwhile, the US embassy in Afghanistan is recommending that US citizens avoid travelling to Kabul airport “because of potential security threats outside the gates”, with reports of violent scenes and overcrowding at the main entrance and at Taliban checkpoints.

A senior US official said the potential threat stemmed from so-called Islamic State, with the military forced to look for new ways of getting evacuees to the airfield.

Sky News said they had spoken to British troops at the airport who had served in Afghanistan previously, and who said the queues, crushing and desperation of people to get out of the country were the worst scenes they had witnessed during their service.

My office is in touch with hundreds of people who have been shot at, beaten or turned back trying to reach the airport and British processing centre in Afghanistan. We need to step up evacuation efforts urgently. My letter to the Foreign Secretary ⬇️ pic.twitter.com/VTiW7wZBjI

“The gate of hell”

In an indication of how bad the situation has become, former Afghan diplomat Zubair Juenda said he had to go through “the gate of hell” to get out of Afghanistan with his wife and two children, aged nine and 10.

He told Channel 4 News: “Adults have been crushed by people… I passed out myself after being crushed, but six people died outside the camp.”

Time is running out to repatriate people to the UK ahead of US President Joe Biden’s August 31 deadline to withdraw most remaining US troops.

On Friday, he did not commit to extending it, in a move that is likely to mean British troops must return home at the same time, as the airport cannot be held without US enforcement.

Reports have suggested the last evacuation flight could be as soon as Tuesday, in order to give British troops enough time to leave safely.

The Liberal Democrats said Tuesday would be a “cruel deadline” and called for Britain to leave “no-one behind”.

The party’s foreign affairs spokeswoman Layla Moran said: “Thousands of Afghans have been plunged into desperation by this arbitrarily set and cruel deadline for the last flight out of Kabul.

“They are depending on us to evacuate them safely and save them from the terror of the Taliban. Britain must not turn its back on them now.”