Dozens of drivers at the Manston site can be seen standing outside of their lorries waiting for food and water. Others have been honking their vehicle’s horns in unison to demonstrate their feelings. 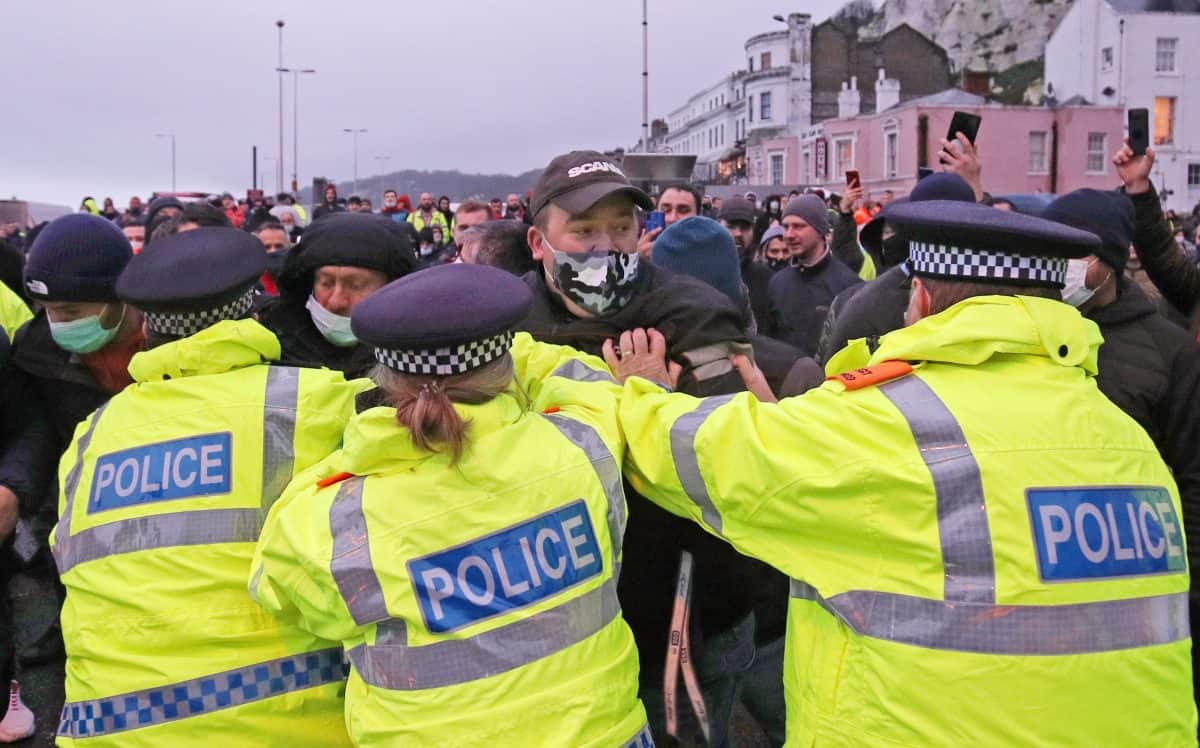 The chaos as Dover has spilled over into outbreaks of violence, as disgruntled lorry drivers are stuck at the port.

Now a man has been arrested after lorry drivers stranded by the French travel ban clashed with police in Kent.

More than 5,000 HGVs are being held in the county, with drivers being tested for Covid-19 before they are allowed into France.

There were reports of disturbances at Dover and at the lorry holding facility in Manston involving those waiting to cross the Channel on Wednesday morning, Kent Police said.

Footage showed a handful of officers attempting to push back a crowd of protesting drivers in Dover.

One man has been arrested for obstructing a highway in Dover and remains in custody, Kent Police said.

Communities Secretary Robert Jenrick warned it may take a “few days” to clear the backlog of lorries waiting to cross into France, despite the travel restrictions being eased.

The British Retail Consortium (BRC) warned there may be shortages of some fresh goods until the backlog is cleared.

Andrew Opie, the BRC’s director of food and sustainability, said: “Until the backlog is cleared and supply chains return to normal, we anticipate issues with the availability of some fresh goods.”

France eased the travel ban on Wednesday, but said those seeking entry into the country from the UK must have a negative coronavirus result.

All truck drivers, regardless of nationality, will be required to take a lateral flow test which can detect the new strain of Covid-19 and return results in about 30 minutes, the Road Haulage Association (RHA) said.

France imposed the travel ban in response to fears about the spread of the more infectious coronavirus strain, which is spreading in the UK.

Hauliers must be able to show proof of a negative test result carried out within the past 72 hours in order to be able to cross into France.

Those who return a positive coronavirus result will be offered a PCR test for a more “refined” result, Mr Jenrick told Sky News.

Drivers will then be moved into Covid-secure hotel accommodation to self-isolate for 10 days if the second test comes back positive.

The disused airfield site at Manston has become the main testing centre for hauliers, with drivers required to self-administer the tests in their cabs under supervision.

There were 3,800 vehicles at the Manston site as of 9.30am on Wednesday, along with 632 HGVs on the M20 as part of Operation Stack and 610 in Operation Brock, the Department for Transport (DfT) said.

“As remaining capacity at Manston is being reserved for testing facilities, any new lorries that are arriving are being directed to Operation Brock,” a DfT spokeswoman added.

Sebastian Payne Tweeted: “Manston Airport, which is becoming a lorry park for Dover, is where Brexit and UKIP began.

“The party took control of Thanet council in 2015 – a major foothold – after the airport was shut. Farage campaigned to reopen Manston. Brexit has kinda done that.”

Around 170 military personnel, including those from the 36 Engineer Regiment and 1 Irish Guards, are assisting with testing.

Hauliers have been urged not to travel to Kent until further notice.

Dozens of drivers at the Manston site can be seen standing outside of their lorries waiting for food and water.

Others have been honking their vehicle’s horns in unison to demonstrate their feelings.

Polish lorry driver Greg Baranski, 39, who has been stranded for two days, told the PA news agency: “We have just two food trucks for maybe 2,000 drivers we are waiting for one hamburger for around two hours in the rain. It’s not nice.

“People here are from Romania, Lithuania, Spain, Portugal, and we are all really angry and hungry.”

Lorry drivers at the entrance of the Port of Dover’s Eastern Docks have also protested about being stuck at the border.

Drivers standing in small groups shouted “we want to go home” as they tried to shelter from bursts of heavy rain and blustery conditions.

Shortly after 11am, police officers told drivers to move their vehicles away from the roundabout at the port’s entrance to enable testing facilities to be set up.

Van driver Emil Liveu, who is transporting parcels from the UK to Romania, has been stuck in Dover since 10pm on Sunday night.

“They told me I need to get a Covid test to cross the border,” the 30-year-old told PA.

“I found a private test, I paid for it, they give me the test, I come back here and they told me no.”

Mr Liveu, who has been sleeping in his cab since Sunday, said: “It’s hard to pay for a hotel when you have paid £130 for the test, money for diesel, paying for the motorway.”

On making it back home to Romania for Christmas, he said: “If I leave now, maybe I’ll get back. But to be honest, I don’t think I have any chance.”

RHA chief executive Richard Burnett said: “The massive backlog of vehicles will take time to clear and hundreds of drivers run the risk or not getting home in time for Christmas.”

The Associated Press reported seeing a ferry pull into the French port of Calais before dawn, while trains carrying freight and car passengers were allowed to cross under the English Channel.

Roads into the Port of Dover remained gridlocked with vans and lorries on Wednesday morning, with groups of people walking amongst the vehicles.

Watch: History of housing crisis in 2 minutes – ‘Goes back to Thatcher’