The enormous mound of waste, which stands 12ft high, appeared in the early hours of Friday morning 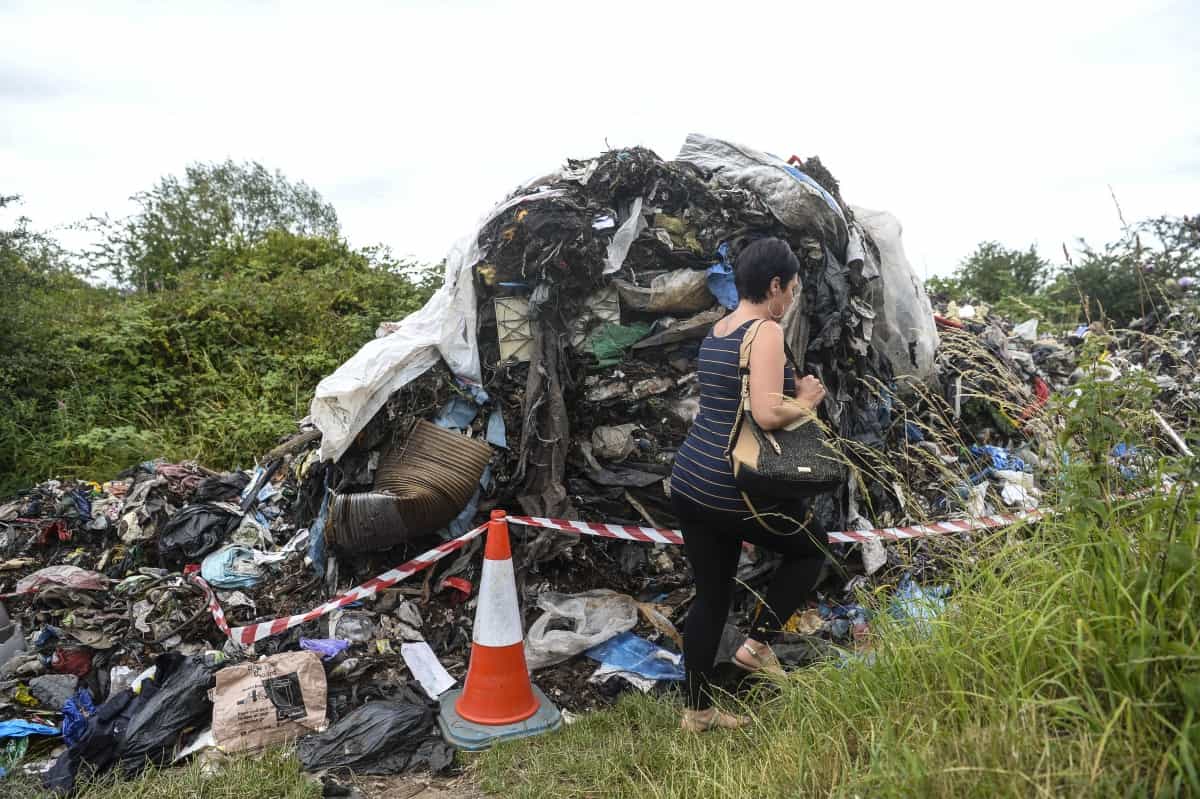 Furious residents have slammed “disgusting” fly-tippers who have left a public pathway impassable – after dumping a pile of rubbish which is 50 FEET long.

The enormous mound of waste, which stands 12ft high, appeared in the early hours of Friday morning.

Items including electrical cables, plugs, circuit boards, children’s toys and even corporate waste can be seen piled up.

One container labelled ‘highly flammable’ was pictured lying in the litter, which appears to have been compacted.

It’s thought the stinking mess was dumped out of a HGV between 12.40am and 1.40am on Friday.

Hundreds of locals in Stockport, Greater Manchester, now have to walk past the rotting pile of waste every day.

The offenders, whose identities aren’t yet known, have been described as “selfish”, “disgusting” and “shameless”.

A nearby resident, who doesn’t want to be named, noticed the mound on Saturday when he took his dog for a walk.

He said: “I have walked down here everyday for years and I’ve never seen anything like it.

“I was completely shocked when I saw, there is such a huge amount of rubbish.

“To be honest it’s absolutely disgusting.

“To dump your rubbish anywhere but a tip is wrong, but to do it on a pathway that’s used by the public is awful.

“Us who live here have to walk past it and smell it everyday now.

“People have to be careful that their dogs don’t go anywhere near it because who knows what’s in there?”

He added: “You can tell that it’s been dumped here by some sort of professional waste disposal outfit.

“This isn’t just a few blokes in their cars, it’s an entire lorry full of rubbish.

“The council need to put concrete barriers up to stop vehicles coming down and prevent this ever happening again.”

The man said people have been fly-tipping in the area for the past ten years but that no one had ever left this much at once.

Social media user Ray Hall posted on Facebook: “Fly tipping is appalling but it will only increase until the perpetrators, when caught, are made to pay the full cost for its removal.”

The pile is on a pathway in Stockport called the Fallowfield Loop.

It has been reported to Greater Manchester Police, Stockport Metropolitan Borough Council and the Environment Agency.

Authorities hope CCTV footage will help uncover who is responsible.

Fly-tipping is defined as the ‘illegal deposit of any waste onto land that does not have a licence to accept it’.

In 2016/17 more than one million incidences of fly-tipping were dealt with by councils in England, with an estimated clear up cost of over £58m.

Offenders can be prosecuted and face imprisonment or a fine of up to £50,000.

The police and local council have been approached for comment.