The Daily Express has lead with twice as many stories about foreigners entering (or attempting to enter) Britain and the EU as the next nearest national newspaper. The paper, which is edited by Hugh Whittow, has already published sixteen front pages this year on the subject, which is twice as much as The Times and over three […] 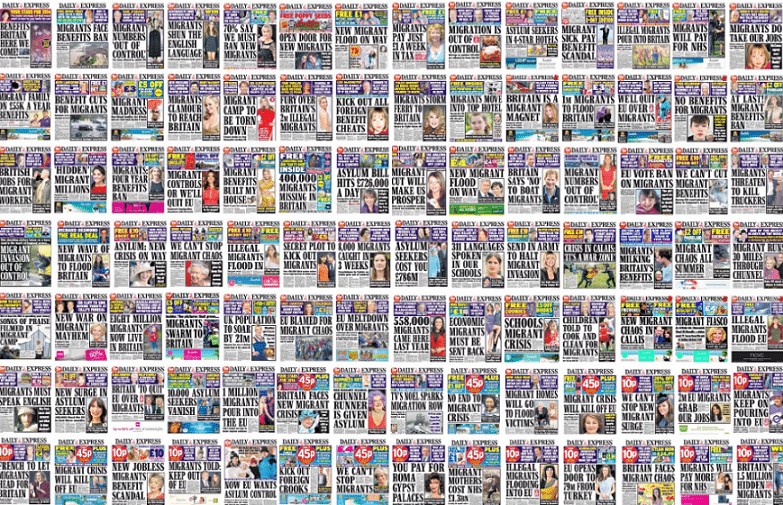 The Daily Express has lead with twice as many stories about foreigners entering (or attempting to enter) Britain and the EU as the next nearest national newspaper.

The paper, which is edited by Hugh Whittow, has already published sixteen front pages this year on the subject, which is twice as much as The Times and over three times more than The Sun.

One such title from earlier in the year claimed there would be a rush of a million migrants to the UK before we exit the EU, despite the surge going the other way.

They are also putting a particularly nasty brand of xenophobic spin on all their front-page stories, with discrepancies with the Mirror’s coverage of the refugee crisis highlighted in recent editions.

Worth highlighting different approach from @DailyMirror and @dailyexpressuk to same story last Monday (been on hols) #migrants #journalism pic.twitter.com/hX2frmhfXe

Anti-immigrant hate crime in the UK has increased exponentially of late, according to the National Police Chiefs’ Council.

In the words of the United Nations human rights chief, the UK media has peddled “sustained and unrestrained anti-foreigner abuse” and “vilification, intolerance and politicisation of migrants.”