@BenGelblum As Tory donors turn against Theresa May and she runs out of Conservative colleagues leaping to her defence, one of her ministers has been rebuked by the Chief Tory whip for asking an obvious but embarrassing question: “whether a government could legitimately lead a country along a path that the evidence and rational consideration […]

As Tory donors turn against Theresa May and she runs out of Conservative colleagues leaping to her defence, one of her ministers has been rebuked by the Chief Tory whip for asking an obvious but embarrassing question:

“whether a government could legitimately lead a country along a path that the evidence and rational consideration indicate would be damaging.”

If the facts suggest Brexit will leave the country poorer, should Theresa May still be pretending otherwise and pursue a course that would damage the UK?

Referring to the leaked Government report that revealed the UK will be worse off in all of the main Brexit eventualities, Justice Minister Phillip Lee insisted:

This directly contradicted his Conservative colleagues and the Prime Minister who have been furiously trying to claim that we need not worry about the contents of their secret civil service report as it had not been authorised by the cabinet yet.

The Brexit impact study which had been meant only for ministers found that Britain will be worse off under every possible Brexit scenario with the benefits of new trade deals not covering the losses from leaving the European Union.

New trade deals are set to add just 0.3% to GDP in the long-term. 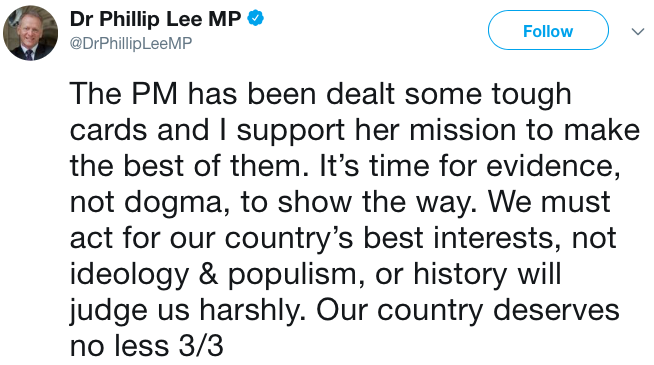 “The next phase of Brexit has to be all about the evidence. We can’t just dismiss this and move on. If there is evidence to the contrary, we need to see and consider that too,” tweeted the Conservative minister.

“But if these figures turn out to be anywhere near right, there would be a serious question over whether a government could legitimately lead a country along a path that the evidence and rational consideration indicate would be damaging. This shows the PM’s challenge,” he added, insisting:

“The PM has been dealt some tough cards and I support her mission to make the best of them. It’s time for evidence, not dogma, to show the way. We must act for our country’s best interests, not ideology & populism, or history will judge us harshly. Our country deserves no less”

The former GP was immediately sternly admonished by the Conservatives Chief Whip Julian Smith for breaking ranks and speaking his mind.

However other Conservatives defended the Bracknell MP, and illustrating the divisions in the Conservative Party, also rounded on Brexit Minister Steve Baker, who had attacked the civil service “always wrong.”

“I do hope the Chief Whip has not spoken to Minister Lee in those terms,” said his Tory colleague Anna Soubry. “I am assuming Minister Baker has in any event been admonished for his appalling comments at the Despatch Box.”

The civil service are avowedly independent as other Tories pointed out. “It’s a good idea for ministers not to try and rubbish their own Government’s documents,” said former minister Bob Neill.

Tory MP Antoinette Sandwich told the Evening Standard: “Some people want to rubbish experts, but some of us rather value their opinions.”

Bob Kerslake, the former head of the civil service, now a cross bench peer told The Guardian: “Civil servants are serving the government of the day and they need the support of that government,” warning that the Brexit Minister’s disparaging claims are part of a “wider narrative from Brexiters” to paint senior government officials with uncomfortable truths as secret remainers.

Tory MPs joined the Labour Party in calling for the secret study into the effects of different Brexit scenarios to be made public.

– A call all the more embarrassing for the Government after last weekend’s revelations that 20 top Tories are taking payments from firms, including foreign interests to brief them on the effects of Brexit, while hiding the Government research into the consequences of Brexit from their own constituents.