A new report says the pandemic has taken an “enormous” toll on NHS staff. 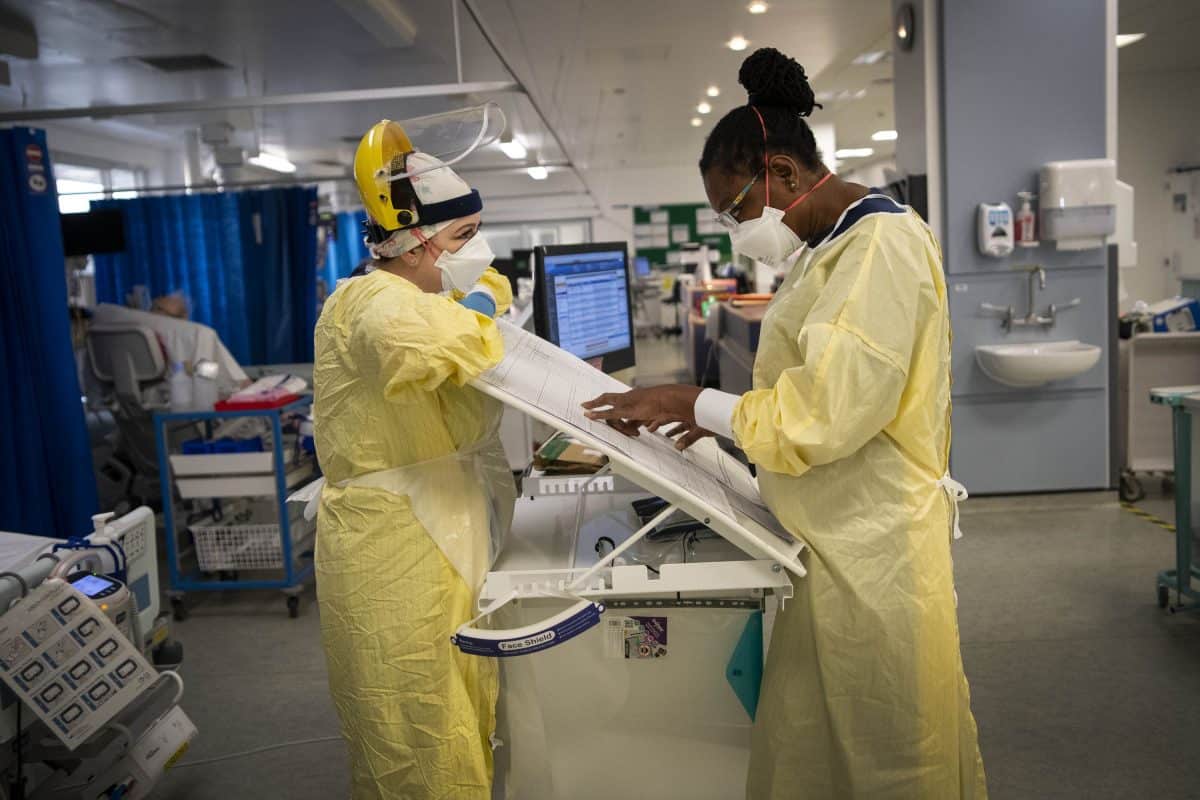 The NHS Confederation, which represents NHS organisations, said the health service risks losing thousands of nurses and doctors unless they are given the time and space to recover from the pandemic.

There are “significant” numbers of staff with depression and anxiety and a small minority will have post-traumatic stress disorder (PTSD), it warned.

A new report from the organisation says the pandemic has taken an “enormous” toll on NHS staff.

Workers have been “sprinting a marathon” for the last year of the crisis, the report adds, leading to serious concerns about the health and wellbeing of staff.

The report described the last year as “gruelling” and says staff – the “most valuable resource” in the health service – should be at the heart of getting services back to usual.

The report says that some staff will need “decompression time” – which should be handled by local leaders.

“For health and care staff, the last 12 months have been likened to sprinting a marathon, with concerns raised over the impact on health and wellbeing,” it says.

“Anxiety, fear and exhaustion among staff are reported to have increased over the pandemic, affecting a range of staff groups and taking a toll in particular on staff from a black and minority ethnic background.”

The organisation said that while staff cannot have a period of decompression in the same way that armed forces personnel do after military deployments, local health leaders need to be creative to ensure that staff can rest and recuperate.

It said that anxiety, fear and exhaustion among staff have increased during the pandemic, adding: “Building in time for staff to rest and recuperate is essential.”

As well as working flat out to treat Covid-19 patients, staff may have also suffered “moral injury” whereby they are concerned about the impact that the pandemic has had on their patients, either through the backlog of care or the fact that some people have put off seeking help.

The report also says that recognising the contributions and sacrifices made by staff over the last year is “crucial for workforce retention”.

It highlights how some organisations have given staff their birthday off or given them an extra day of annual leave this year for a “wellbeing day”.

Danny Mortimer, chief executive of the NHS Confederation, said: “We give a few examples in the report of different studies from different types of organisations, and they’re all fairly consistently pointing towards significant numbers of people who are reporting kind of symptoms of severe anxiety and depression and a significant minority that we fear may go on and need support for PTSD.”

“Colleagues in the NHS have clearly been through something remarkable over this last year, whether that’s the colleagues who were dealing directly with Covid patients or colleagues who know they’re not being able to do everything that they would normally do or want to do for their patients – the concept of moral injury.

NHS Confederation warned that the government needs to act now to avert a staffing crisis in the health service. Without action the government will fail on the key manifesto pledge to recruit 50,000 nurses, it warned.

And it will take the health service even longer to address the impact of the pandemic on waiting times and other services.

The body called on the government to explain to the public that the NHS recovery will take some time, in particular “pacing the expectations of the resumption of elective work”.

Related: Sturgeon vows not to be ‘bullied’ out of office as she survives confidence vote

Is it ok to use your Instagram Feed as a Day-to-Day Food Diary?