The 42-year-old, who entered Britain as an asylum seeker in 2001, fears he will be a target for the Taliban in Kabul. 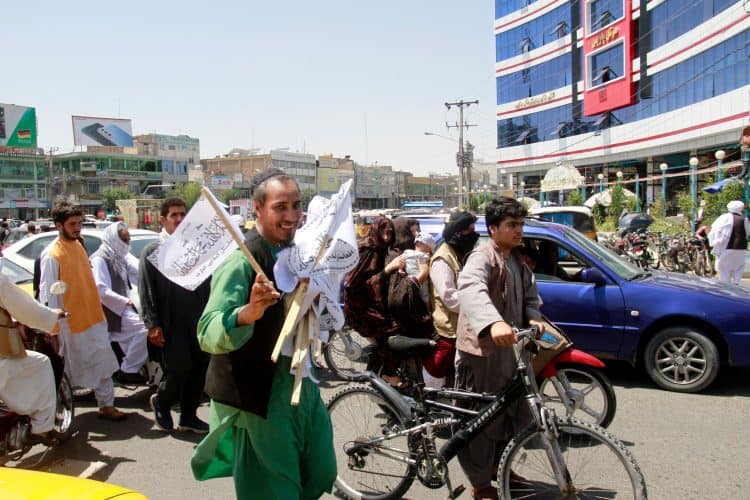 A British father-of-two in Afghanistan who fears for his life says he cannot fly to safety in the UK because it would mean leaving his wife “all alone to die”.

The 42-year-old, who asked to be identified only as Omed, said he was “hiding at home” with his family in Kabul as Taliban forces took control of the country’s major cities and moved into the capital.

He fears his British citizenship and previous work on US army bases will make him and his family targets for the Taliban.

Omed has two children under the age of eight, who also have British nationality, but he said that because his wife is not a UK citizen, she could not get a visa to come to the country.

He told the PA news agency: “If I fly back to UK, how can I leave my wife all alone to die?

“As soon as they come to Kabul – obviously people know each other: neighbours, businesses and everything – they would come and if they don’t find me obviously my wife would be there.

“I cannot leave her – whatever happens, I would like to be with her.”

Omed, who was born in Afghanistan, arrived in the UK in 2001 as an asylum seeker after fleeing the Taliban, ultimately claiming citizenship.

He moved back to Afghanistan around 12 years later, when he believed it was safer, and began working with a company drilling water wells.

He said he has enough money to support his family back in the UK but has been told his wife cannot get a visa.

“They should at least show compassion because already they are taking embassy staff back to the UK,” Omed said.

“They might have had room to consider people who have Afghan wives and are able to support them back in the UK. It’s an emergency.”

Omed said he has only once been able to speak to anyone from the embassy, around two weeks ago, and was told there were no special circumstances that would allow him to take his wife to the UK.

He went to the British Embassy on Sunday morning, he added, but found that the building had been evacuated overnight.

He said he is trying to remain as calm as possible for the sake of his family.

“I’m really scared but I’m trying to, in front of them, to be calm and show that nothing will happen,” he said.

“If I show my feelings, what’s inside, to them probably they will start screaming.

“But deep down I know it’s not as easy as I’m trying to show them.

“It’s really scary because being a British national is one and working in the US army bases is a second danger for me.”

He said he plans to leave as soon as possible to go and stay with relatives in an area where people do not know him, before possibly trying to escape to a neighbouring country with his family.