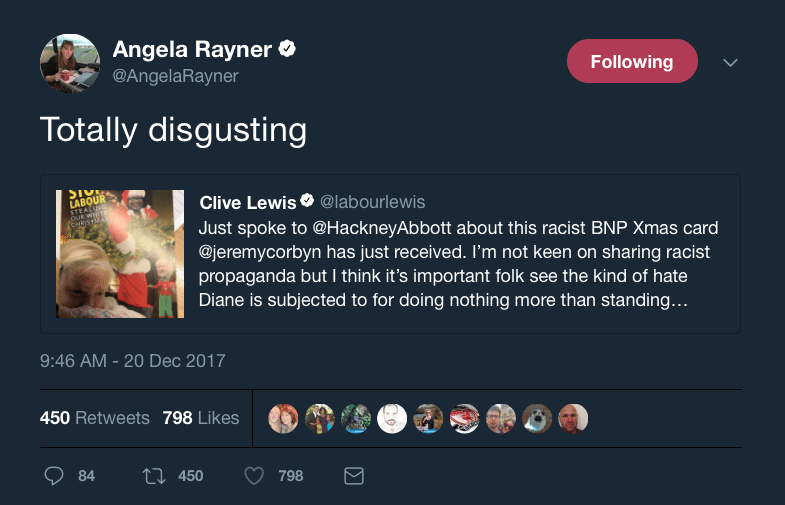 Clive Lewis MP tweeted: “Just spoke to Hackney Abbott about this racist BNP Xmas card Jeremy Corbyn has just received. I’m not keen on sharing racist propaganda but I think it’s important folk see the kind of hate Diane is subjected to for doing nothing more than standing up for her beliefs #solidarity”

Diane Abbott received almost half of all abusive tweets sent to female MPs in the run-up to the general election, research by Amnesty International revealed. And the Hackney MP has been outspoken about the sickening abuse her and her team have had to encounter.

“I’ve had death threats, I’ve had people tweeting that I should be hung if”they could find a tree big enough to take the fat bitch’s weight’… I’ve had rape threats…and n*gger, over and over and over again” – Diane Abbott’s testified to a parliamentary debate about intimidation against members of parliament this summer.

“I was appalled by this disgusting racist Christmas card sent to Jeremy by the BNP. This is the type of vile racist abuse aimed at my colleague and friend Diane Abbott on a daily basis, l will always stand in solidarity with her. I am sorry for showing this but l wanted you to see the type of horrible abuse she gets on a daily basis, we must stand against this awful stuff,” said fellow Labour MP Angela Rayner.

Just spoke to @HackneyAbbott about this racist BNP Xmas card @jeremycorbyn has just received. I’m not keen on sharing racist propaganda but I think it’s important folk see the kind of hate Diane is subjected to for doing nothing more than standing up for her beliefs #solidarity pic.twitter.com/Fniv292pIt