“This is absolutely sick. Jab passports and quarantine are not jokes. Leave it out of Christmas please," one person wrote. 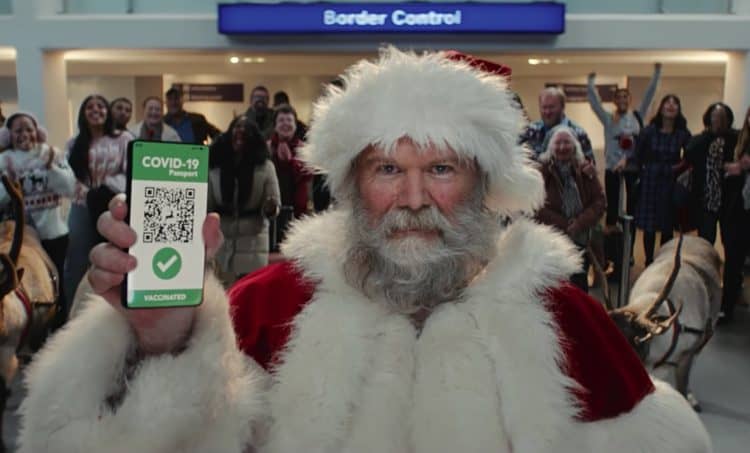 Anti-vaxxers have threatened to boycott Tesco after the supermarket featured a double jabbed Santa in their Christmas advert.

Titled This Christmas, Nothing’s Stopping Us, the minute-and-a-half clip shows Britons enjoying the festive season after lockdown restrictions last year meant the majority of friends and families could not come together.

But, amid the joy a news reporter tells shocked viewers that Father Christmas “may have to be quarantined” – before the man of the hour appears in front of a border control officer bearing his Covid passport to certify he has received both doses of a vaccine, and so can go ahead with his travel plans.

But despite most people recognising that Santa is make-believe, dozens of anti-vaxxers took to Twitter to launch a #BoycottTesco campaign in response to the commercial.

“Blimey … I bet Tesco bosses are sweating right now,” one man in Essex tweeted. “Who the hell thought it was a good idea to show a vaccine passport in their Xmas advert?!”

He added: “I’m not surprised #BoycottTesco is trending. Idiotic.”

One woman from Loughton commented underneath the ad – posted to the official Tesco Twitter account – saying: “This is absolutely sick. Jab passports and quarantine are not jokes. Leave it out of Christmas please.”

The supermarket giant made its position clear, though, responding to Faye’s message directly, saying only: “This Christmas, #NothingsStoppingUs.”

Some of the responses were more dramatic, with one man posting a picture of his Tesco Clubcard cut up into three pieces.

“Nope,” he wrote alongside the image. “I spend £500+ a month with yourselves. Not anymore though. #BoycottTesco.”