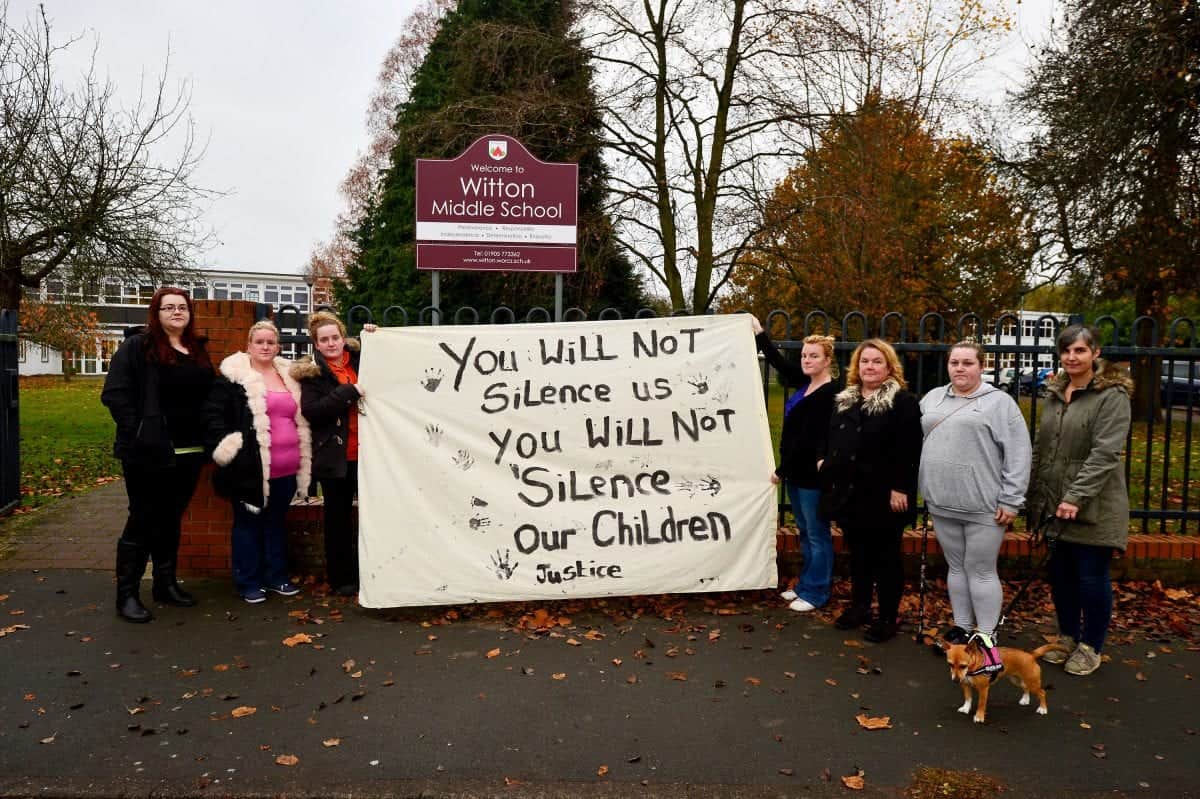 Jess Brown, 27, went to her daughter’s school to speak to staff after Lilly-Jo Caldcott tried to kill herself the day before her 10th birthday.

But the mum found herself locked out of her daughter’s school just days after the ten-year-old attempted suicide following months of bullying.

The schoolgirl was rushed to hospital on Monday after her worried mum took her to a GP when she admitted taking an overdose of painkillers and other pills.

The next day Jess posted heartbreaking pictures of Lilly-Jo lying in a hospital bed on her birthday to raise awareness about bullying.

Today  Jess was locked out of Witton Middle School, in Droitwich, Worcestershire, after she tried to talk to staff about the issue.

She also says the school held an assembly where pupils were told that Lilly-Jo’s torment had been “exaggerated”.

In a video posted on her Facebook page, Jess walks up to the front entrance of the school but finds the doors are locked.

She then knocks on the glass, but despite people clearly standing on the other side of the door, she is ignored.

Single-mum Jess then turns to the camera and says: “They have locked the doors on us so we cannot get in.

“All we want to do is find out why they have been saying these things to the children and to lie about what has happened to my daughter.

“They say she has been over-exaggerating things. As you can tell they have locked the door and barricaded themselves in.”

Jess, who is also mum to Demi-Leigh, six, and eight-year-old Callie-Ann, has lodged a formal complaint with the school and is demanding an apology.

She said: “It makes me so angry that at a time where Lilly is at her most vulnerable, the school have effectively accused her of lying about being bullied.

“I have seen her coming home day after day in tears because of the abuse she has suffered.

“After I posted the pictures of her in hospital after her suicide attempt I hoped it would show the school and other parents just how serious the situation was.

“I hated doing it but I felt our concerns had fallen on deaf ears. The parents of the bully weren’t interested and the school just brushed off our concerns.

“Lilly-Jo was discharged from hospital on Wednesday night and when I told some of my friends they said that the school held an assembly about her.

“At first I was glad because I thought they would tell the children that bullying was unacceptable but instead the said Lilly-Jo was over exaggerating.

“How can they do that? The school is basically taking the side of the bullies and victimising my daughter.

“How can the school say she’s making it up when Lilly-Jo is getting counselling and support from mental health professionals?”

Minutes after sharing the video on her Facebook page, Jess was inundated with messages of support from other parents.

Gabriella Perry wrote: “This place should be shut down if this is how they handle bullying.”

Tricia Pursey posted: “Any school that doesn’t address bullying is failing as a school.”

Lilly-Jo was discharged from Worcestershire Royal Hospital on Wednesday (14/11) night after having her stomach pumped.

At the time of Lilly-Jo’s admission to hospital, headteacher of Witton Middle School Cath Crossley said pupils would be given lessons on anti-bullying.