By Joe Mellor, Deputy Editor The factory where Trident nuclear warheads are built has seen construction disruption due to protests by anti-war protestors. The blockade at the Berkshire site has been organised by an international group of anti-war protestors. On Wednesday the group claimed that they had brought a halt to work on the site […] 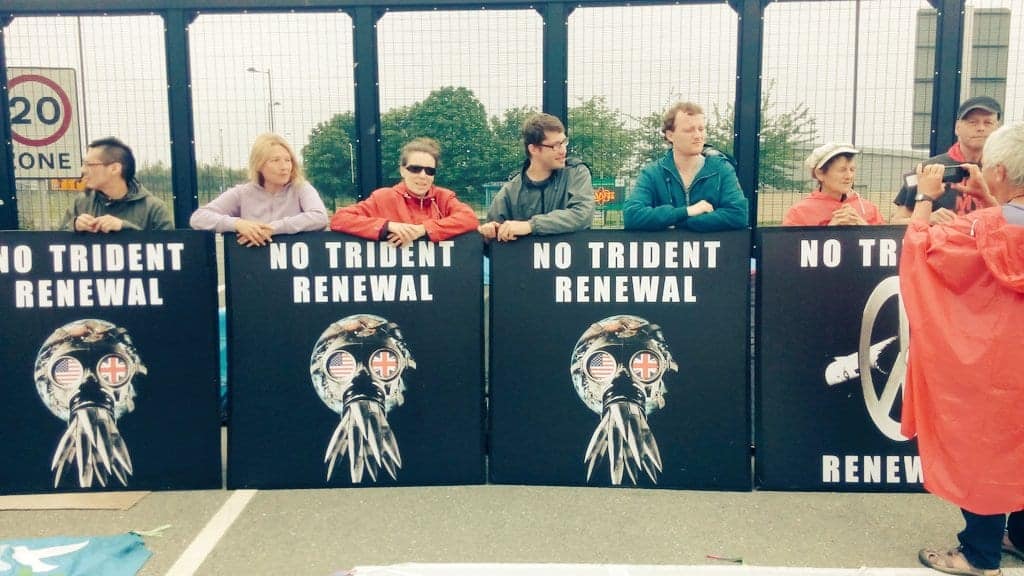 The factory where Trident nuclear warheads are built has seen construction disruption due to protests by anti-war protestors.

The blockade at the Berkshire site has been organised by an international group of anti-war protestors.

On Wednesday the group claimed that they had brought a halt to work on the site for over three days.

It is part of a month of direct action that began on Monday, when the group began to block roads near the Atomic Weapons Establishment at Burghfield. The site is the lace where warheads are maintained and assembled.

The direct action was organised in response to the news that work is secretly underway to upgrade the existing nuclear deterrent. It is claimed that the Government are trying to build a totally new warhead the “Mark 4A.” This is a separate nuclear weapon to the planed renewal of Trident, which has found many objections, especially the cost of a totally new nuclear arms arsenal.

A report by the Nuclear Information Service made the claims and believe the new weapon will be more accurate and destructive. The timetable and costs of this clandestine project have not been shared with the public or Parliament, which has caused some degree of controversy.

The activists have formed chains by locking their arms together inside tubes – and were joined by others from Belgium, France, Germany and Finland.

Around 20 and 30 people were involved at any one time in the blockade, including an 87-year-old who lay down on the roadway and another man who was in a wheelchair.

Thames Valley police said on Wednesday that four people had been charged in connection with the obstruction of a roadway near Burghfield on Tuesday. The four – who were aged 18, 25, 32 and 62 – were released on bail to attend Reading magistrates court later in June.

Anti nuclear protesters have chained themselves together to block a road outside AWE in Burghfield pic.twitter.com/Q6dlWo5Qkf

The message from #Burghfield is absolutely clear. #ScrapTrident, for all our futures pic.twitter.com/EAAHQvBx0g