The three-door Nissan Micra was stopped on the A47 near Thorney Toll, Cambs.,

by SWNS
in Automotive, Tech and Auto, Weird News 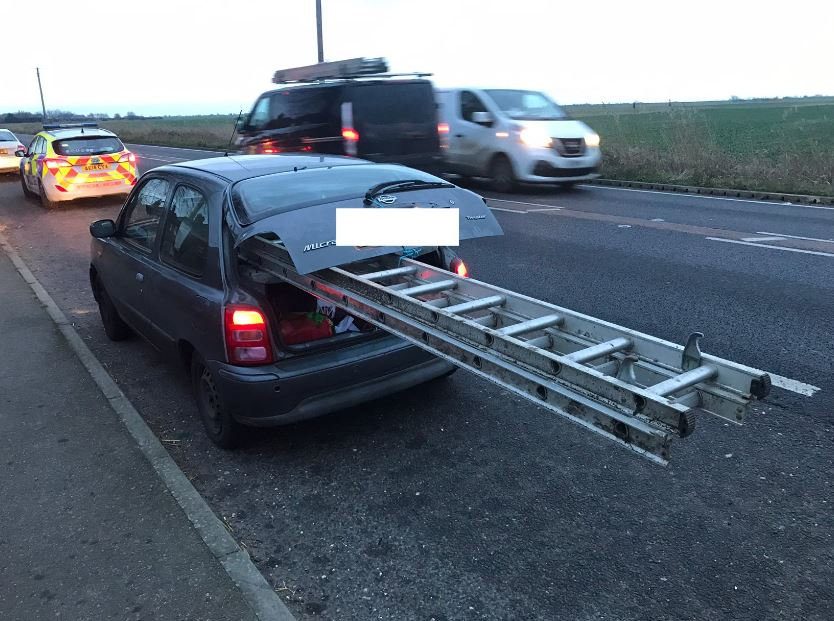 This driver had a “ladder nerve” driving down a busy carriageway with what appears to be a ten metre ladder sticking out of its boot.

The shocking image shows a three-door Nissan Micra transporting the equipment with the ladder crammed into the small car.

The car which was stopped by Fenland Police, in Cambs., had the ladder touching the front windscreen, and the passenger seat’s headrest and was nestled between two rungs.

A Cambridgeshire Police spokesman said a male driver was reported for a traffic offence and given words of advice at the roadside at about 15:30 on Monday (7 Jan).

Fenland Police who pulled over the motorist, tweeted pictures of the car writing: “Don’t think this was a good idea.”

Bemused social media users took to Twitter to share their thoughts on the drivers driving style after he was pictured on the A47 near Thorney Toll, Cambs.,

Peggy Star also added: “And why what could possible go wrong. (sic) how can a driver be so dumb #CRUSHIT #resit their test.”

One who user said they were “glad the police have, ahem, taken steps…” to combat the problem.

While another suggested the driver was taking “stupidity to new heights”.

A police spokesman said: “If an item extends more than two metres rearward from a vehicle it needs to have a marking to show that projection.

“This vehicle did not have any markings.

“The driver was issued with a TOR [traffic offence report].”