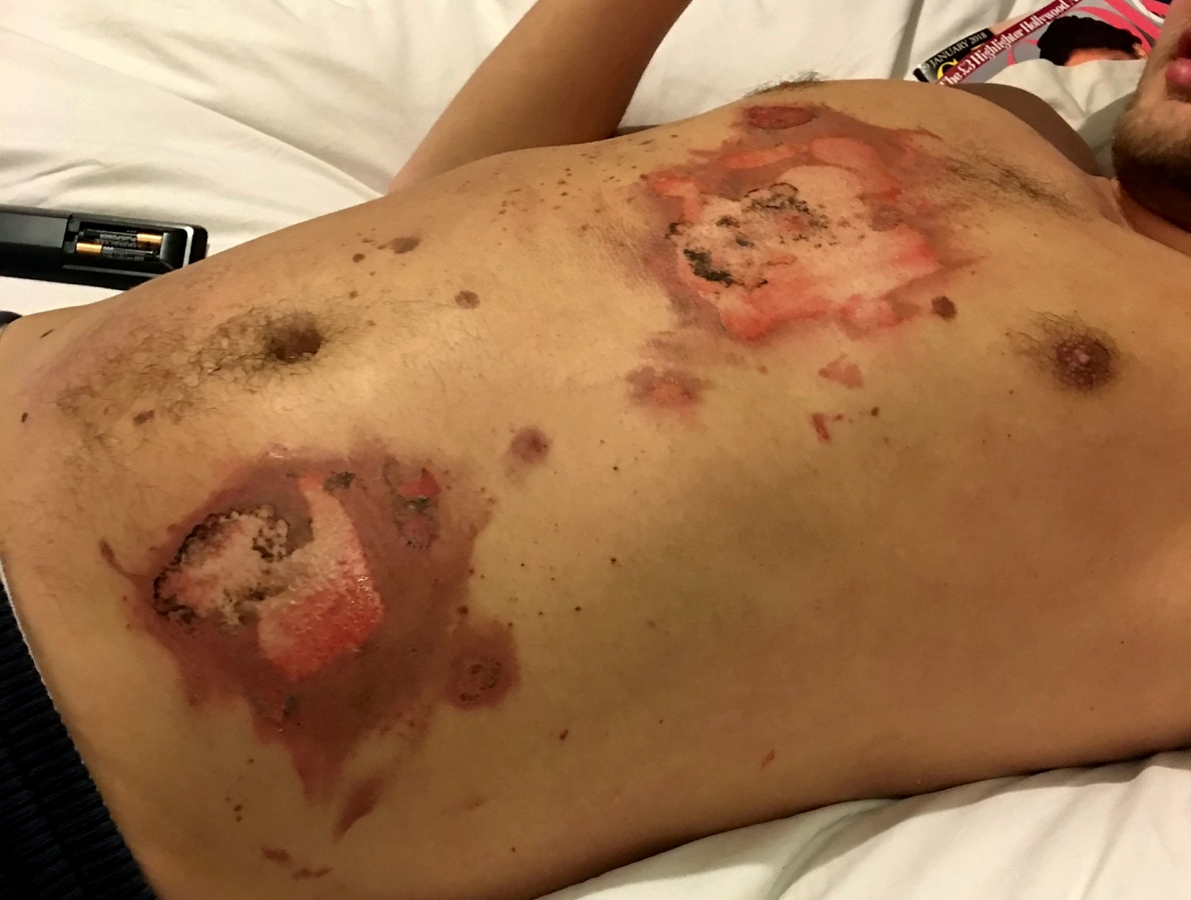 A golf pro was engulfed in flames and left with third degree burns after his vape exploded while he was driving – and wrote off his car.

Will Hawksworth, 24, suffered horrific burns to his chest and stomach when the brand new batteries on his vape pen blew up in his pocket and set fire to his clothes.

Will’s clothes melted and his chest was alight while he frantically found somewhere to pull over before he leapt out to extinguish the flames.

The molten vape burned through his gilet and fell between the seats of the Audi A5 hire car he was driving and Will watched in horror as it went up in flames.

He is now in the process of claiming compensation from ecigarette battery company Efest.

Will, a Professional PGA golferWill, from Sheffield, said: “It felt like I was being burnt alive.

“It was the most painful thing you could ever imagine. My clothes burnt onto my chest and my skin was completely burnt.

“I was terrified. I thought this was it and I could have lost my life. I’ll never go near a vape pen ever again. They are lethal.”

Turned to vape pens to help kick the habit

Will started smoking cigarettes aged 15 but took the decision to quit around five years ago, aged 19.

He turned to e-cigarettes, also known as vape pens, to help kick the habit.

Will says he has smoked a vape pen every day for five years and they have helped him to quit smoking completely.

Will bought brand new batteries for his vape pen and charged them at home before inserting them in his vape.

Disaster struck as Will and his 25-year-old girlfriend Molly Biney drove home from the supermarket and sparks started to fly out of his gilet pocket.

Will added: “Molly said ‘quick stop, there are sparks coming out of your jacket’.

“I heard a noise that sounded like fireworks and then my gilet just burst into flames.

“The battery blew up as I pulled over. By the time I stopped I was pretty much engulfed in flames.

“It burnt through my clothes and fell down the side of the car seat. I got out and took my clothes off and covered myself in snow. It was agony.

“The car just went up in flames. It was completely burnt out.”

The couple dialled 999 and called for the fire and ambulance services.

Will was taken to the Northern General Hospital by ambulance and treated for severe burns as fire firefighters fought the blaze.

He was given emergency burns and gel packs to soothe the pain and medics went about the excruciating work on cleaning his wounds.

Will was allowed home after six hours of treatment but had to attend regular appointments at the burns clinic having suffered second and third degree burns to his torso.

He has been left with scars for life and irritable skin that glows bright red when exposed to heat.

Doctors gave him the option of a skin graft but he turned the surgery down because he didn’t want to create further wounds on his body.

Will said: “My appearance does bother me, especially when I’m on holiday. My skin gets very aggravated when it’s hot. I can’t really expose it to the sun.

“It is horrible to live with now. It could have ended so much worse. I feel lucky to be alive.”

Since the accident Will has opened a compensation claim against Efest and is hoping to take the company to court.

The lawsuit is still in its early stages and Will has yet to be told a potential figure for how much compensation he could win from the company.

Efest has been contacted for a statement.