Hidden away in remote Victorian ex-prisons or behind barbed wire at the back of industrial estates, Britain detains around 30,000 people in privately-run detention centres on administrative grounds, ostensibly while attempts are made to remove them from the UK. During the election campaign every major political party’s manifesto contained a vow to end indefinite detention in […] 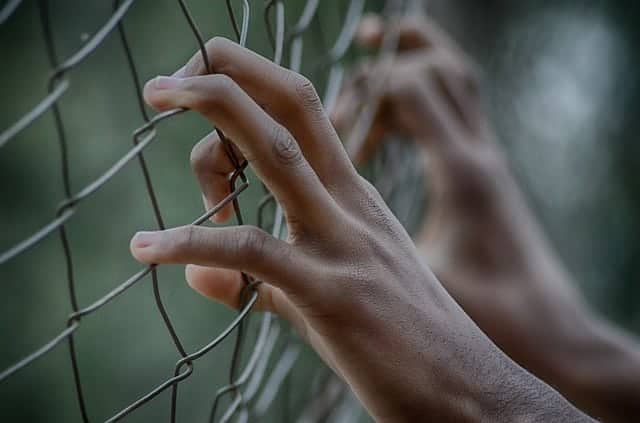 Hidden away in remote Victorian ex-prisons or behind barbed wire at the back of industrial estates, Britain detains around 30,000 people in privately-run detention centres on administrative grounds, ostensibly while attempts are made to remove them from the UK.

During the election campaign every major political party’s manifesto contained a vow to end indefinite detention in immigration cases. All apart from the Conservative Party. The cruel practice has been criticised by MPs from both sides of the benches, Her Majesty’s Prison Inspectorate and the NGO’s involved in helping those scarred by it rebuild their lives.

One of the central themes of #RefugeeWeek this year is a focus on the government’s continued insistence on indefinite detention. One of the organisations that helps those caught up in this dehumanising practice is Detention Action. Their Freed Voices group helps ex-detainees find voice to bear witness to their experiences.

One such voice is Sam, who having spent time both in prison and then detained in an Immigration Removal Centre, here in our last article for Refugee Week, describes the difference between the two. – What it it’s like to be in prison on a fixed sentence handed down by a judge as punishment, and what it feels like to be detained with no end in sight by a faceless administrative decision of a civil servant.

“I was in detention for seven months and they were the hardest months of my whole life. The trauma of detention will stay with me with me forever. It is indefinite.”

But what does this really mean..?

In prison everyone is always asking each other “what bird are you doing?”, which basically means “how long have you got left?”. If you’re there a long time you say “I’m doing ‘big bird’.”

In detention, everyone is always asking each other how long they’ve been there so they can try and work out how long they might be there for. They told me I’d be there for a month, max. Well, that didn’t happen…

Everyone in prison is walking around with an egg-timer hanging over their head.

Everyone in detention is walking around with a stopwatch hanging over their heads – one of those digital ones where the milliseconds buzz like crazy.

In prison, its natural you associate with people doing similar length sentences to you. In that sense (and only that sense!), its kinda like a boarding school, with different year groups.

It can be difficult socially in detention. You check yourself from making relationships with people that might vanish the next morning. You cut yourself off.

You’re in prison to pay your debt to society but at the end of the day you’re still seen as a member of that society.

You are invisible in detention.

If someone dies in prison or the prison services break their own protocol, there are investigations and people are held accountable.

I’m not saying it always works but there’s a ‘project’ in prison. You’re there as a form of punishment but there’s also an objective: when your sentence is done you are ready to reintegrate.

There are no objectives in detention. Only government targets.

There are incentives and privileges to behave in a particular way in prison. Your behaviour changes when people invest in you.

Every month I was in detention I got the same Monthly Report. And it was exactly the same as everybody else’s. It was a cut and paste job. I could have been anybody.

Some people used calendars or that old markings-on-the-wall thing. I used milestones. I had three birthdays, four Christmases inside. I went in around the time of the London Olympics and I remember saying to myself: “ok, you’ll be out for Rio Olympics.”

There’s nothing to hook your experiences on in detention.

There’s a lot of stress in prison but every day you wake up you know exactly what you are doing until you go to bed in the evening.

Every day in detention is unknown. You turn into a headless chicken. Imagine hundreds of headless chickens all stuck in one cage. They’re all freaking out because they don’t know what’s happening and any moment someone could be grabbed for the chop.

I learnt the calls of different birds in prison so I could tell when the seasons changed.

There are no real seasons in detention. Its just a grey blur. White noise.

Hope dies every day in detention.

Routine can be a form of self-preservation. Every morning, I’d get up, shave, brush my teeth…etc.

People’s hygiene goes in detention. It’s part of the deterioration. They’re not removing me, they’re not releasing me, they say I’m someone else. Who am I? Does anyone even care? Why should I bother then? Stop showering. Stop shaving. Why continue?

I went to prison a survivor of genocide with serious PTSD. They had a medical plan mapped out for my sentence. Every two weeks I had counselling. Even when I moved prisons they never missed a session.

Healthcare in detention there don’t do treatment plans because, who knows, you could be gone tomorrow.

Relationships definitely suffer in prison but that the sentence structure can help. People can say “when I get out in 3 months, I’m going to buy this ring and marry you” or “when I get out, we’re going to move to Scotland and start a new life”. You can make promises you can keep.

I saw so many relationships break in detention. All the promises you made to your kids, for example – that you are going to be out at a particular time, that you’ll be there for this thing at school – they all get broken. After a while, they don’t trust you any more. Why would they? You can’t fully explain the situation to them because you can’t explain it to yourself. The Home Office can’t even explain it.

The yard-reality of prison hit me early on and I realised, ok, I need to concentrate if I am going to get through this. I have to use the structure they are giving me here to my advantage. I need to focus on my release date.

You can’t concentrate in detention. This cocktail of fear and anxiety and stress… it makes your mind melt.

It doesn’t work for everyone…but prison can make you.

I was in prison for three years and nine months.

I was in detention for seven months and they were the hardest months of my whole life. The trauma of detention will stay with me with me forever. It is indefinite.’

This piece was written by Sam from the Freed Voices group at Detention Action and appeared among their powerful descriptions of life in Britain’s Immigration Removal Centres.

Ben du Preez, Campaigns Coordinator at Detention Action told The London Economic:
“Immigration detention has long been an active way to criminalise migrants in this country. The government have traditionally been very happy to confuse immigration, asylum and criminal justice and detention centres are the ultimate physical translation of this: individuals are warehoused in prison-like conditions, penned behind 20ft walls and reams of barbed wire, handcuffed if they need emergency care outside and spend large chunks of the day in lock-down in their cells. Speak to anyone who has experienced both however, and the majority will tell you detention is much more extreme experience due to the lack of a time-limit. Everyone dragged into a detention centre basically receives a life-sentence on arrival.  And that really tells us everything we need to know about the way this government sees those they detain.”
#Time4atimelimit
Tags: #RefugeeWeekdetentionrefugee week