A self-styled grammar vigilante has been correcting rogue apostrophes on a city’s signs – for the last THIRTEEN years. By day the anonymous crusader is a highly-qualified professional with his secret known only to a handful of close family and friends. But at night he becomes a shadowy figure who patrols the streets of Bristol, […] 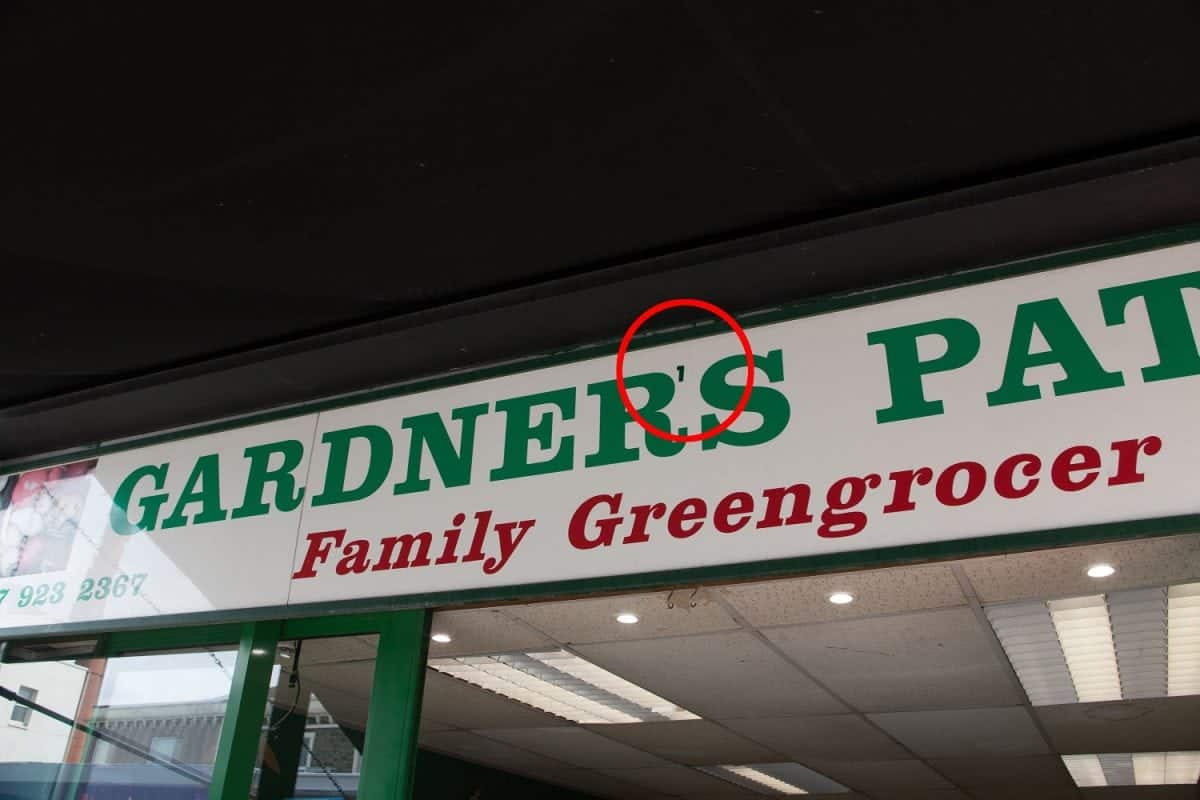 One of the signs corrected by Bristol’s anonymous grammar vigilante who has been secretly correcting shop signs using stickers and his specially designed apostrophiser. See SWNS story SWGRAMMAR: A grammar vigilante has been secretly correcting shop fronts for the past 13 years -- but specilises in rogue apostrophes. The unnamed grammar stickler has a zero tolerance approach to poor punctuation. He ventures out under the cover of darkness to correct street signs and shop-fronts across Bristol with apostrophes in the wrong place. The self-styled vigilante, who has been dubbed grammar's answer to Banksy, has even invented an “apostrophiser” to reach the highest signs.

A self-styled grammar vigilante has been correcting rogue apostrophes on a city’s signs – for the last THIRTEEN years.

By day the anonymous crusader is a highly-qualified professional with his secret known only to a handful of close family and friends.

But at night he becomes a shadowy figure who patrols the streets of Bristol, armed with his homemade ‘apostrophiser’ and purpose-built trestle.

His specially-made tool reaches the higher signs on shopfronts and road signs, replacing or covering rogue apostrophes wherever he sees them.

The vigilante – dubbed grammar‘s answer to Banksy – started his quest when he corrected a shop sign for ‘Amy’s Nail’s’ – removing the second apostrophe.

Since then he has put a stop to dozens of other rogue apostrophes around the city – including a hairdressers, estate agents and garages. The man told BBC News: “I’m a grammar vigilante. I do take it to heart – I think it’s a cause worth pursuing.

“I’ve been doing it for quite a lot of years now.

“People might say what I am doing is wrong, but it is more of a crime to have the apostrophes wrong in the first place.”

The vigilante takes care to make his corrections fit in – using the same typeface and colour as the original signs where necessary.

He affixes a sticker to cover or add the punctuation mark with his ‘apostrophiser’ – a device on a long pole.

For the taller jobs he takes along his homemade trestle to reach up to the signs.

One of his most recent corrections was to Cambridge Motors garage in the shadow of HMP Bristol where an errant apostrophe in Motor’s had annoyed him for years.

It was successfully changed under cover of darkness – and garage Chris Knight didn’t even spot it the following day. Mr Knight, who has owned Cambridge Motors for 30 years, said: “I thank him for what he’s done.

“I don’t mind at all, it’s good to see people still caring about English grammar.”

The vigilante denied he was breaking the law and said: “I think you can do it without causing too much offence, and being discreet in how you do it.

“I have felt extremely nervous. My heart has been thumping. I’ve got to make sure it’s technically right.

“When I look at a sign and I have been the one that’s done that and made it grammatically correct, it does make my heart swell slightly when I see the correct apostrophe.”

Another recent correction was at Tux & Tails in Bristol’s Gloucester Road where he corrected “gentlemans outfitters” to gentleman’s outfitters.

He said: “I’m not going to lose any sleep over it. I will not be taking any further action.

“I have mixed feelings over it really. He could have let me know before doing it, which would have been more professional.

“It was quite a new sign, we rebranded 10 months ago. I did check over it and didn’t really think it needed an apostrophe.”

A documentary on the man called ‘The Apostrophiser’ will be broadcast tonight on BBC Radio Four.