Amber Traxler, 33, was horrified when her son Jared Traxler attempted to take his own life in 2016 on the one-year anniversary of his grandfather’s death. 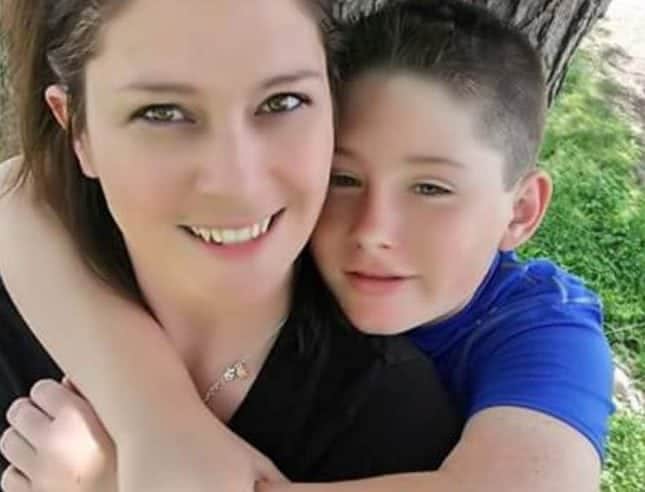 A brave schoolboy has released a heartfelt message reassuring those battling mental health issues that they are not alone – after he attempted suicide aged ten.

Jared Traxler, now 12, spoke out with his mum Amber Traxler, 33, in a bid to raise awareness about the topic.

It comes after Jared attempted to take his own life in 2016 on the one-year anniversary of his grandfather’s death.

The eighth grader was devastated after he discovered his grandad Jake Meyers, 53, had passed away in his sleep in June 2015 when he visited his home to borrow a fishing rod.

Jared, of New Haven, Kentucky, USA, struggled to cope with his grief in secret until he attempted to take his own life at his grandmother’s house ahead of a summer bonfire in June 2016.

Mum-of-five Amber says she will never forget the moment she discovered her son hanging from the back of a bedroom door after attempting to take his life.

Amber and her mom Tilly Meyers, 53, became worried when they discovered Jared had locked himself into a guest bedroom and was not responding when they knocked.

After discovering Jared’s lifeless body, full-time mum Amber called for help as his grandmother Tilly got him down and began performing CPR. Jared was airlifted to Norton Children’s Hospital in Louisville where he was placed in an induced coma and remained on life support for five days.

Doctors were unsure of how long Jared had been deprived of oxygen and feared he could be brain damaged.

But Jared survived and he has now spoken out in a bid to help others who are struggling with their mental health.

In a tear-jerking video clip, the schoolboy said: “It’s OK to talk about how you feel. Being involved in sports and going fishing keeps me active and feeling great.

“I hope my story helps somebody and remember all y’all are loved and worthy.”

Amber said: “He never wanted to talk about his Pawpaw and I thought his change in mood came down to him becoming a teenager.

“We were all at my mom’s house. I could tell that Jared was in a bad mood, and when he went into her guest bedroom I didn’t think much of it.

“She started calling his name and he wasn’t answering her which immediately worried her. She went to open the door and found it locked.

“She got the key and that’s when I heard her scream. I will never forget that scream – my heart jumped up into my throat.

“We managed to push the door open and he was on his knees, he had hung himself. His face was black, his lips were purple. He was dead. My mom got Jared down and started CPR.

“On the street I saw a man from the Water Department and I yelled, I begged him to call an ambulance.

“I ran back into the house and my mother had managed to revive him. He at least had a pulse.

“Within minutes the fire department, the police and the EMTs had arrived and a helicopter had landed in the local baseball field to airlift Jared to the Children’s Hospital in Louisville.

“We drove to meet him there and before I was allowed to go into the room, the doctors prepared me for the worst.

“He was unrecognizable. He was hooked up to so many machines and he was intubated.

“I couldn’t believe that a ten-year-old would want to do this. I felt so guilty that I had missed the signs.

“Jared was on life support for four or five days and I felt like I was going to lose him.

“The doctors struggled to regulate his temperature and he had suffered a collapsed lung.

“They worried he may have been deprived of oxygen for too long and could be brain damaged.” Stay-at-home mum Amber described the relief she felt when her son opened his eyes after doctors attempted to pull him out of the coma.

“He was still intubated but his eyes immediately filled with tears. I think he was really scared.

“I was just so relieved that he was alive. My biggest fear is burying one of my children.

“I think the doctors were all so shocked. Jared was so young at the time but I was so relieved that I hadn’t lost him.”

After he was released from hospital in July 2016, Jared began to attend regular counseling sessions which helped him to finally grieve for his grandfather.

The schoolboy says he is feeling very healthy and encourages other children to confide in a loved one if they are feeling low.

He added: “It was really hard after I lost my Pawpaw but if you are feeling low it will all be okay.

“Talking really helped me and I think about the good memories we had together a lot.

“I am a lot more open about how I am feeling with my mom and grandma and I love fishing. It gives me time to think away from everything.

“Counselling really helped me too because I can tell my counselors how I’m feeling.

“Right now I’m in a happy place. I like school but it’s my dream to be a pro bass fisherman when I’m older so that’s my focus.” By Ben Gelblum and  Patricia Murphy