A sex attacker who violently raped a woman in front of her bed-bound husband has been jailed for 18 years. Graham Smith assaulted the vulnerable woman during the “cruel and shameless” prolonged attack after forcing his way into their flat. Heather Gilmore, prosecuting, said homeless Smith was heavily drunk when he committed the offences. The […] 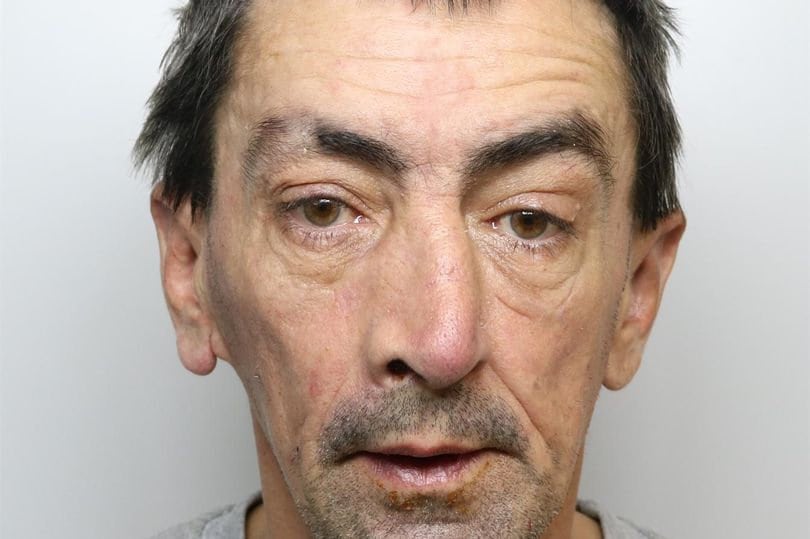 A sex attacker who violently raped a woman in front of her bed-bound husband has been jailed for 18 years.

Graham Smith assaulted the vulnerable woman during the “cruel and shameless” prolonged attack after forcing his way into their flat.

The court heard the couple had learning difficulties and the husband was bed-bound as he had a number of health problems.

Smith was filmed by CCTV entering the flats shortly after 5am on August 13 last year.

Ms Gilmore said Smith knocked on the door to their flat and the woman, in her late 50s, answered the door in her pyjamas.

The court was shown footage of Smith grabbing the woman and forcing her to remove her clothes.

He also kicked, slapped and put his hands around her neck as she was on the ground.

Smith continued the attack inside the property.

He hit the husband over the head as he lay in bed and continued to sexually assault the woman before he raped her on the bed.

Ms Gilmore said the victim’s husband was powerless to intervene.

The woman managed to get to a phone and call police during the ordeal but Smith pulled it away from her.

Police officers were sent to the flat after an operator could hear screaming before the line went dead.

Smith was still in the flat and was sat next her husband on the bed.

He was drunk, slurring his words and claimed he was only at the flat to fix the couple’s freeview box.

After his arrest he told police he had hepatitis.

Ms Gilmore said the woman was tested for the infection but the results were negative.

Smith was linked to the sex attacks through DNA evidence.

Charles Blatchford, mitigating, said Smith had admitted the offences two days before a trial was due to begin.

Mr Blatchford said Smith had been shocked when shown footage of himself attacking the woman.

The barrister said his client had said: “Oh god that is terrible. Turn it off, I feel sick. That poor woman, I’m sorry.”

Recorder Abdul Iqbal, QC, said: “These were cruel and shameless crimes committed against two vulnerable victims in their own home who had little opportunity to protect themselves.

“The impact upon them has been profound – that cannot be understated.

“You, on the other hand, could not care less. You have no, or very little, insight in to this offending.

“The harm you have caused is immeasurable.”
Smith was given an extended prison sentence totalling 18 years.

He must serve a custodial term of 13 years followed by a further five years on licence.