Andrew Smith, 51, hung the flag on a pole in his back garden in tribute to the country he loves so dear after serving for six years in the Royal Signals

by Nathan Sandhu
in Must Reads 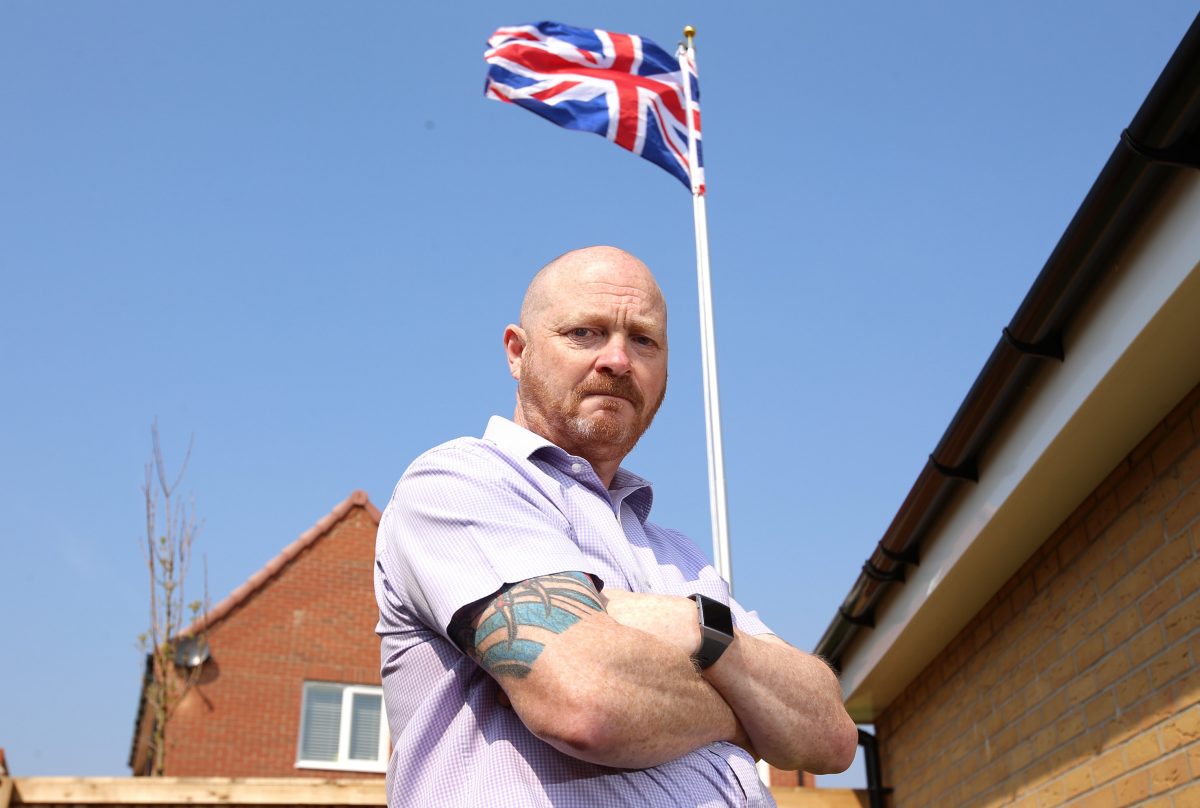 A former Gulf War veteran who flew a Union Jack flag in his own garden says he has been ordered to take it down – after a neighbour labelled it a ”nuisance”.

Patriotic Andrew Smith, 51, installed the flag on a pole in tribute to Great Britain after serving six years in the Royal Signals.

But following a complaint by one neighbour on his estate, he says he received a letter from a housing developer ordering him to take it down.

The father-of-two has so far complied with the notice but is now fighting back because he is “proud to be Britsh”.

Andrew served in the British army between 1988 and 1994 and saw action during the Gulf War – a conflict waged by coalition forces in response to Iraq’s invasion of Kuwait.

He wanted to show his continued appreciation for Queen and country and decided to purchase the £3 flag from eBay which measures 5ft by 3ft.

But Andrew says a disgruntled neighbour complained to bosses at Harron Homes who he claims have warned him to take down the flagpole or face legal action.

He said: “I think it’s the flag as it’s the first thing he {the neighbour} mentioned, he said to me ‘I hope you’re taking the flag down, it’s spoiling our view.’

“I can’t see why a union jack flag is offensive. Why would you be offended by patriotism?

“We have become soft and don’t want to upset other people, whereas I have done my bit for my country and I’m proud to be British.

“I went to war for my country. It’s something close to my heart and every morning I feel like saluting it. We are becoming weak and spineless. Who are they to tell me not to fly the flag?”

Andrew, now a project manager, moved into the property in Hucknall, Notts., with his wife Trigania, 28, in October last year.

The couple previously lived in Chilwell, Notts., where Andrew flew the flag without incident for 10 years.

He asked locals on the Sandlands Park Facebook group page in February this year whether anyone would be offended if he installed a pole and union jack flag in his back garden.

Andrew says he received more than 70 positive comments and decided to go ahead, but heard a knock at the door within hours of putting it up from a disgruntled neighbour.

Andrew, now a project manager, said: “It’s a covenant garden, whatever I signed when I bought the house said I wasn’t allowed to do anything that causes a nuisance or annoyance.

“I asked on a Facebook group ‘is this going to offend anyone, I’m proud to serve?’.

“Then I got a knock at the door from a neighbour round the back who said ‘we don’t like that, are you going to take it down?’.

“They probably knocked on the door around 20 times over the next three days but I just ignored it.

“Then we got a letter from Harron Homes saying they had been instructed by a solicitor that I have to take the flagpole down because it’s causing a nuisance.

“I took it down but I have fought back.”

The flagpole is not a permanent structure and Andrew intermittently switches the union jack with the England flag which he puts us during football and rugby matches.