Mohammed Rahman, 24, was stopped by cops on a motorway with £1,000 worth of drugs

by Ben Gelblum
in Broken Britain, Must Reads, News 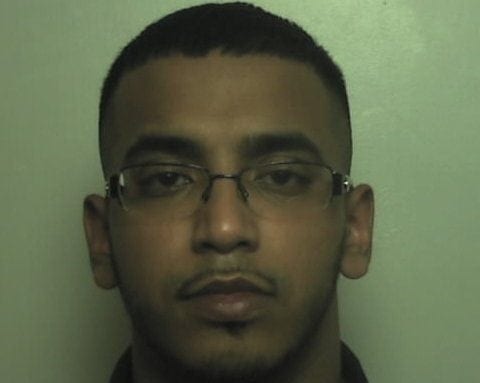 A drug dealer has been jailed for five years after police spotted wraps of heroin and crack cocaine – hanging out of his BOTTOM.

Mohammed Rahman, 24, was stopped by police on the M6 motorway after he was suspected of being a drug courier.

Officers arrested him when they saw packs of drugs “poking out of his bottom.”

Rahmam, of Ladywood, Birmingham, was jailed for five years after he was found guilty of possession with intent to supply Class A drugs.

Jailing him at Stafford Crown Court on Monday Judge Michael Chambers said:
“You were doing this for financial reward and for your own benefit.

“You know all too well the human tragedy caused by class A drugs.”

The court heard Rahman was arrested on July 27 last year after police officers suspected he was acting as a drug courier.

His car was stopped in Eccleshall Road, Stafford, just after midnight and, following a search, the court was told, “the tag end of a wrap of drugs was seen poking from his bottom”.

Cops found 48 wraps in his possession with a street value of around £1,000.

He was stopped after he left the M6 at Junction 14, Stafford North, travelling from Birmingham with the heroin and cocaine.

Speaking after the case, PC Nathan Bromage, of Staffordshire Police, said: “Rahman had done his best to conceal the class A drugs he was carrying and intending to sell in Stafford.”