The Calpins are thought to be the biggest band of brothers to have fought in the conflict, which left more than 700,000 British soldiers dead between 1914 and 1918 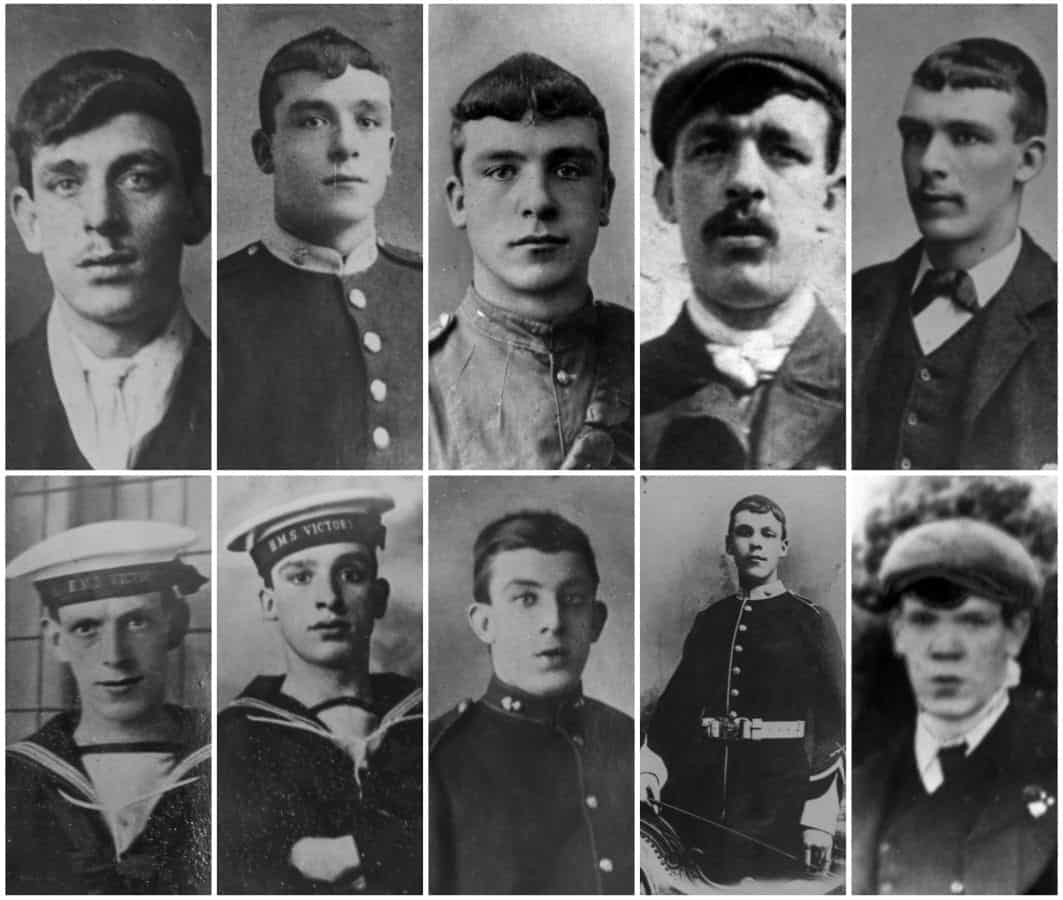 The astonishing story of how 10 brave brothers fought in WW1 with NINE incredibly surviving has emerged on the eve of the centenary of the Armistice.

The Calpins are thought to be the biggest band of brothers to have fought in the conflict, which left more than 700,000 British soldiers dead between 1914 and 1918.

Amazingly with just one brother lost, the family mirrored the fatality rate among British soldiers at the time which was just over one in ten (11%) losing their lives.

The Calpins extraordinary contribution to the war effort earned public thanks and congratulation from King George V, the prime minister of the day. 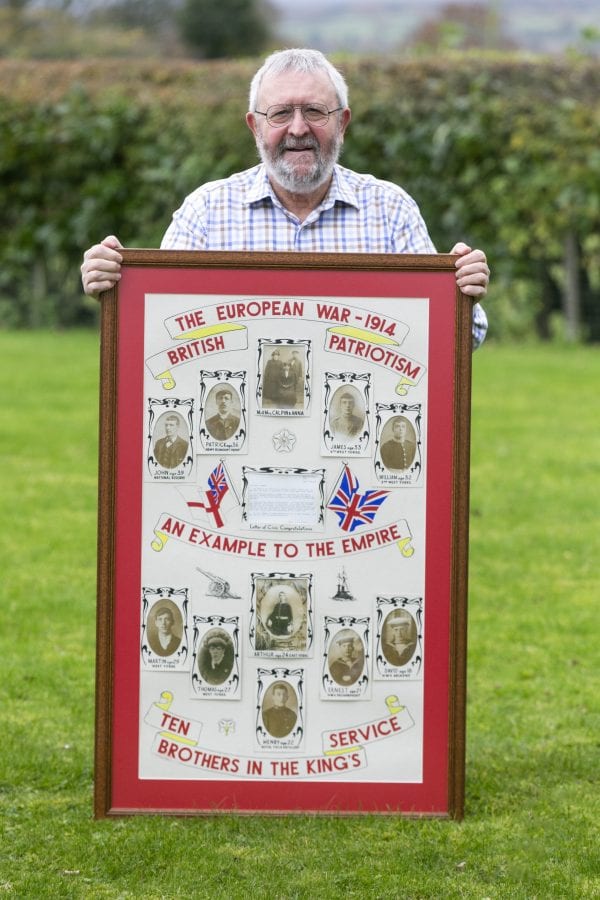 Their names were trumpeted in a recruiting drive at the time and even broadcast in local cinemas in their home city of York.

However the men, many later buried in unmarked graves, have no permanent memorial and their descendants are now calling for them to be honoured in their hometown,

The family’s only fatality was the eldest, John, 39, who was gassed in the trenches in France and died in 1916 after being transferred back to a UK hospital.

His grave, in a remote area of a cemetery in York, is the only place that any of the men’s service is commemorated. 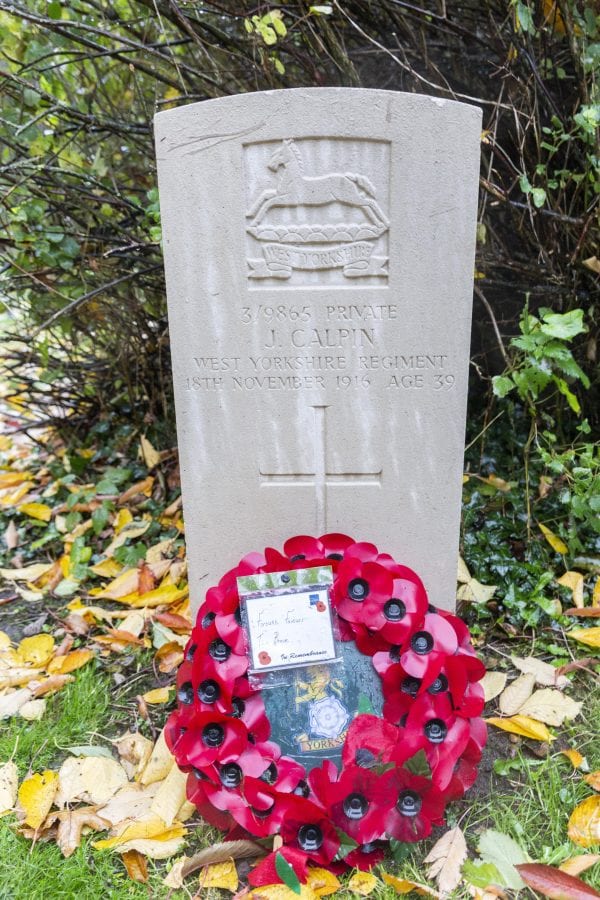 It is thought the rest of the men, after returning to poverty following the conflict, were buried in unmarked graves because the family could not afford the expense of headstones.

Today, as Britain prepares to honour all those who served in the First World War, few have ever heard of them dubbed the “forgotten brothers” by relatives.

Two generations on, Michael Calpin, 68, is calling for a permanent memorial to be erected amid fears their place in history will fade into virtual obscurity.

Michael is the grandson of able seaman and ninth brother Ernest Calpin, who served on HMS Dreadnought and went on to re-enlist in WW2 before he died in 1957. 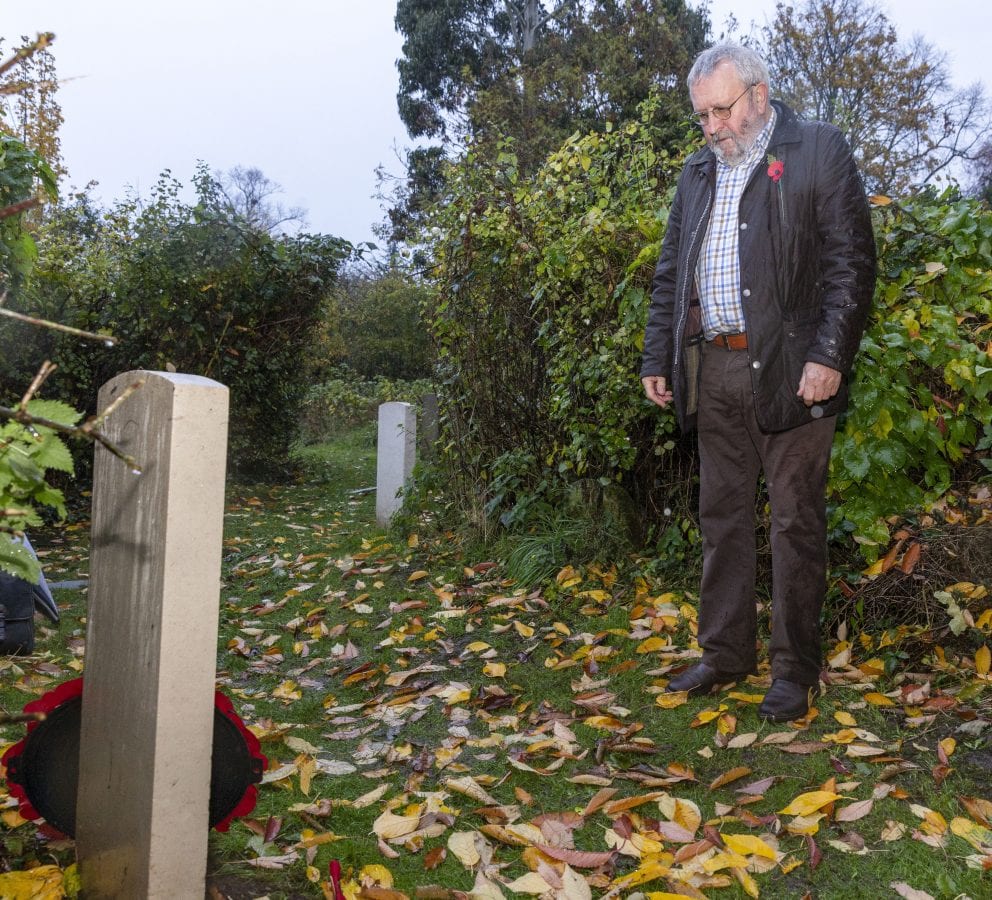 The married retired sheet metal worker said: “It’s the same old story. In 2014 their story was publicised but it’s just forgotten again like it was 100 years ago.

“John was gassed in France in 1916 and was brought back to York but died a few weeks later. All the other brothers survived the war.

“He is the only one to have any physical presence that proves any of the brothers existed really because he was given a war commissioned grave which meant the army paid for his headstone.

“The rest were all buried in paupers graves which are unmarked because they were a poor family living in the slums of York.

“I think that’s why they have never been recognised because only one of them died during wartime.

“Their achievement has gone unrecognised, it would just be nice to have a civic-type plaque in honour of the sacrifice they made.

“When they came back from the war they were just completely forgotten. For 10 brothers to actually sign up is a unique thing which will never happen again.”

Most of the family lived in the early 1900s in a less than affluent area inside York’s city walls. 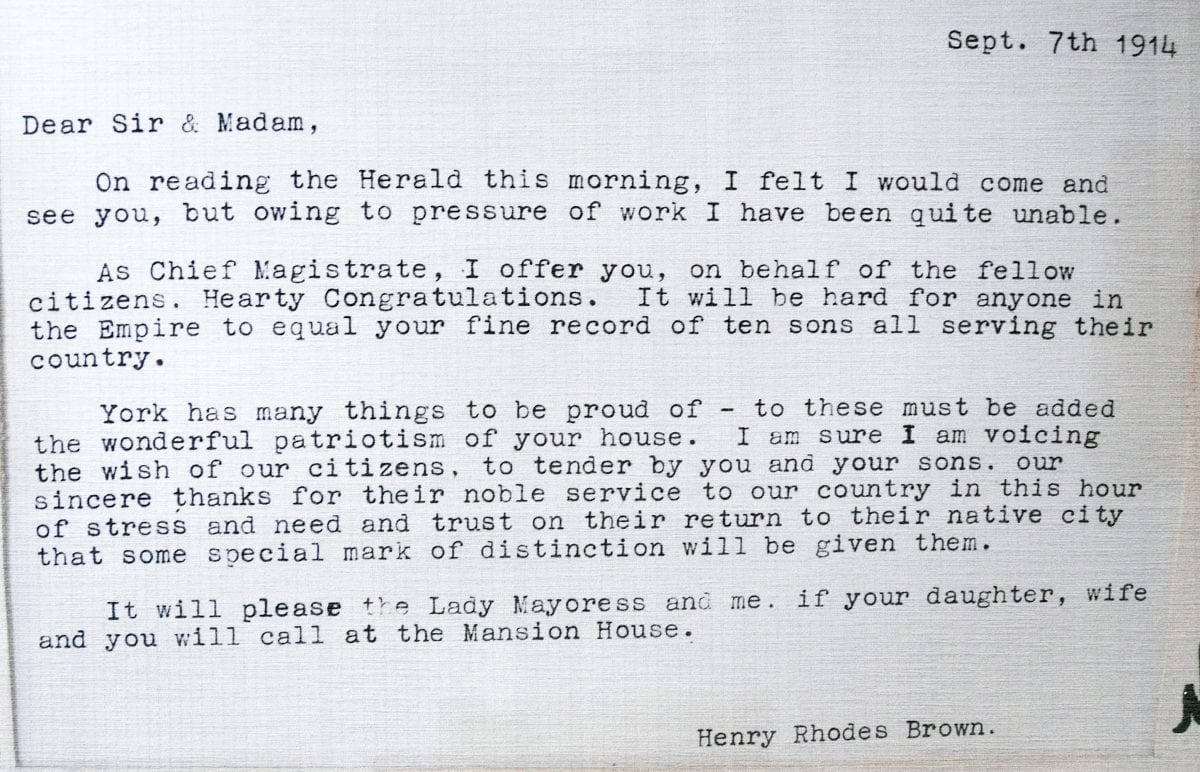 The Calpins originally came to England from County Mayo, Ireland, driven out by the 19th-century potato famine.

Parents Paddy and Sal Calpin, an Irish immigrant and his wife from the Walmgate slums in York, watched as their sons signed up to fight in the approaching war.

When the Lord Mayor of York Henry Rhodes Brown heard of the family’s remarkable sacrifice he wrote to Paddy and Sal.

The letter shows he heard of the Calpin family through a newspaper article and wrote offering his “hearty congratulations”.

He wrote: “It will be hard for anyone in the Empire to equal your record of ten sons all serving their country.

“Our sincere thanks for their noble service and I trust in their return to their native country.” 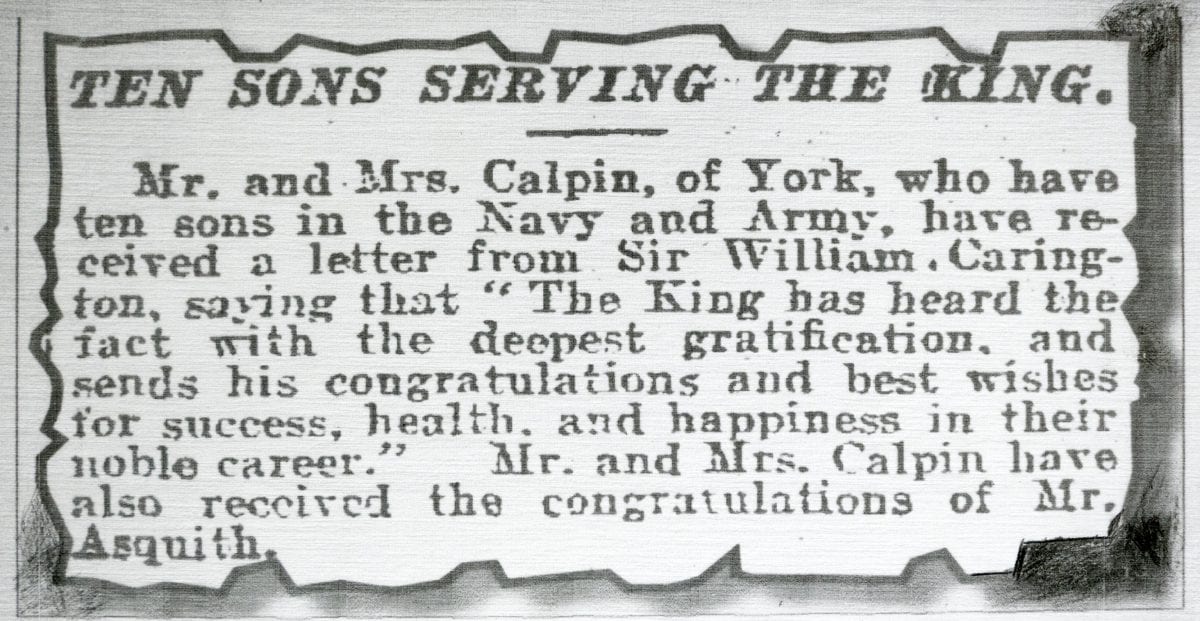 Six brothers signed up for the Army, most with the East and West Yorkshire infantry regiments.

They joined two brothers who were already in military service for British Empire forces at the outbreak of the war.

Arthur Calpin, 24, had served nearly eight years in the Army and was in India when war broke out.

William Calpin, 32, had been serving in Malta. Soon they would reunite with the other seven to fight ‘the Hun’ on land and at sea. 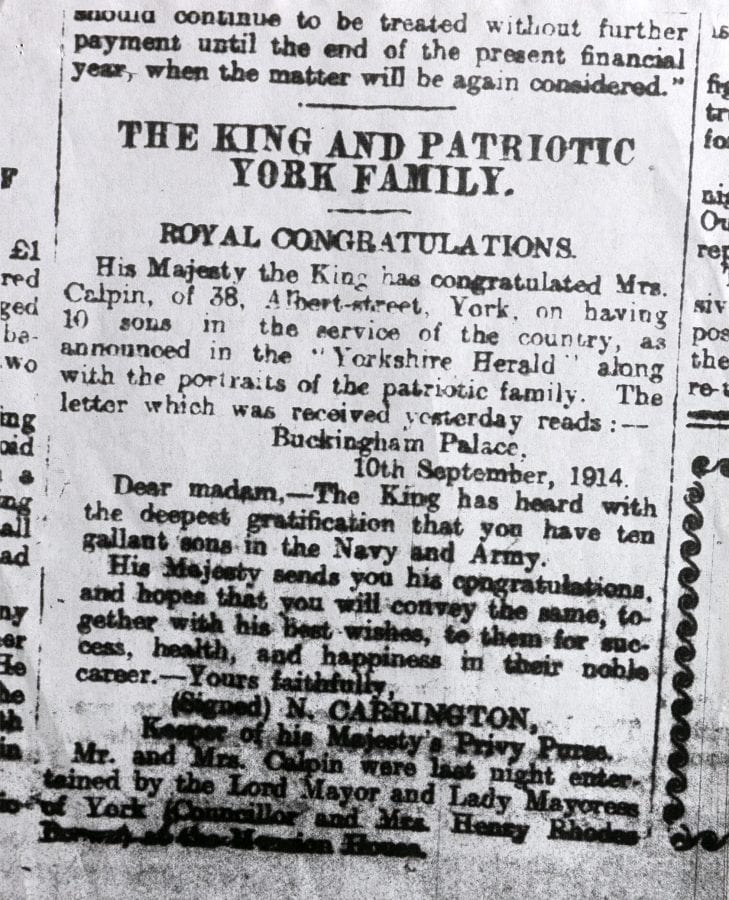 He was wounded in action, but, like the other brothers, returned to join his family.

An ‘Acting Corporal A Calpin’ with the East Yorkshire Regiment, mentioned in despatches and listed in the London Gazette in 1917, was almost certainly Arthur.

Also in 1917, David, the youngest of the ten, was serving on HMS Ariadne when it was sunk by a German U-Boat.

He was rescued from the water but suffered severe exposure. Although he returned to work for a few years after the war, he died at the age of 32.

Private John Calpin, the eldest brother, was gassed in the trenches in France and shipped back to hospital in Nottingham before he died in York.

He sent a Red Cross postcard to his wife to let her know he had landed safely in England, but died in November 1916 at the age of 39.