Writer Amy Sharpe, 26, tells how she survived when her boyfriend opted to do ‘Dry January’ – when all she wanted to do was drink gin Call me selfish, but when my boyfriend told me he was going dry for January my first thought was: “but what about me?” Throughout my three-year relationship with Jon, […] 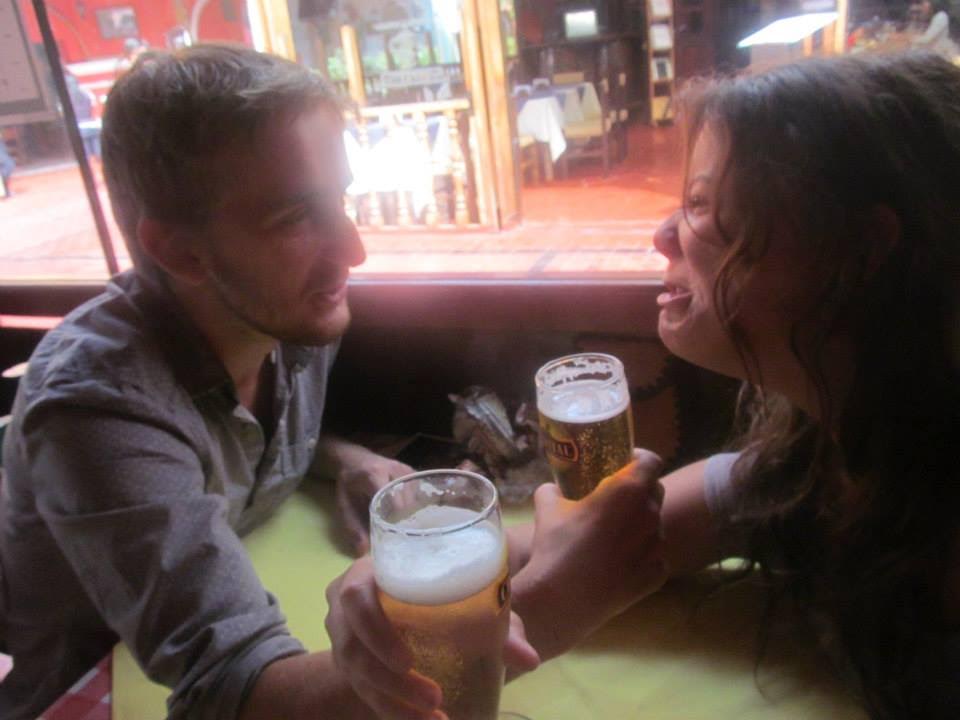 Writer Amy Sharpe, 26, tells how she survived when her boyfriend opted to do ‘Dry January’ – when all she wanted to do was drink gin

Call me selfish, but when my boyfriend told me he was going dry for January my first thought was: “but what about me?”

Throughout my three-year relationship with Jon, alcohol has been a very welcome third-wheel. Kronenburg eased the awkwardness when first got chatting, Gordon’s was a witness the first time we pulled and Malbec has been privy to most of our rows.

And my boyfriend is the man who is known to his pals as Jonny 2 Beerz (with a backwards ‘2’), so hearing he was going sobes was a shock, to say the least.

There was never any question of me joining Jon on his 31-day quest for sobriety. January is such a pit of gloom it demands knocking back twice the usual units, in my book.

Plus, I already had a bottomless Prosecco brunch pencilled in for the 8th.

I must admit, it crossed my mind to talk him out of it, but when Jon reeled off the old health benefits/money-saving spiel, I knew that trying to tempt him back to the dark side was a no-no. Trying to do so wouldn’t exactly scream ‘supportive partner’. More ‘emotionally abusive bully’, if anything.

So, I pasted on a supportive smile and muttered ‘you can do it’, ‘I still like you,’ etc, etc.

But I wasn’t without my doubts.

Would a 24/7 sober boyfriend for 31 days mean a month spent dating a dullard?

How would I cope waking up with hangover horrors knowing my all-seeing boyfriend would be able to recall my vodka-induced stumbles, drools and faux-pas with 20/20 clarity?

Worst of all, what if he became a convert? A sort of Mocktail Monk, preaching the benefits of tonics ‘n’ lime over tequila? I can explain most things to my booze-loving family but a tee-totaller isn’t one.

Our first test came January 6. Desperate to find an activity to enjoy together that swayed from the usual Friday night pub sesh, suggestions included mini golf, bowling and the cinema.

Calling up Hollywood Bowl to secure a lane, I felt like I’d regressed to Year 9.

“If I have to witness the potential father of my children drinking a Slush Puppy while I chugged a lager, it’s over”, I told myself.

Thankfully, every other Londoner still recovering from New Year’s antics had booked out all the teen-friendly activities in the area, leaving us with no choice: “Pub it is, then!” I gleefully announced. 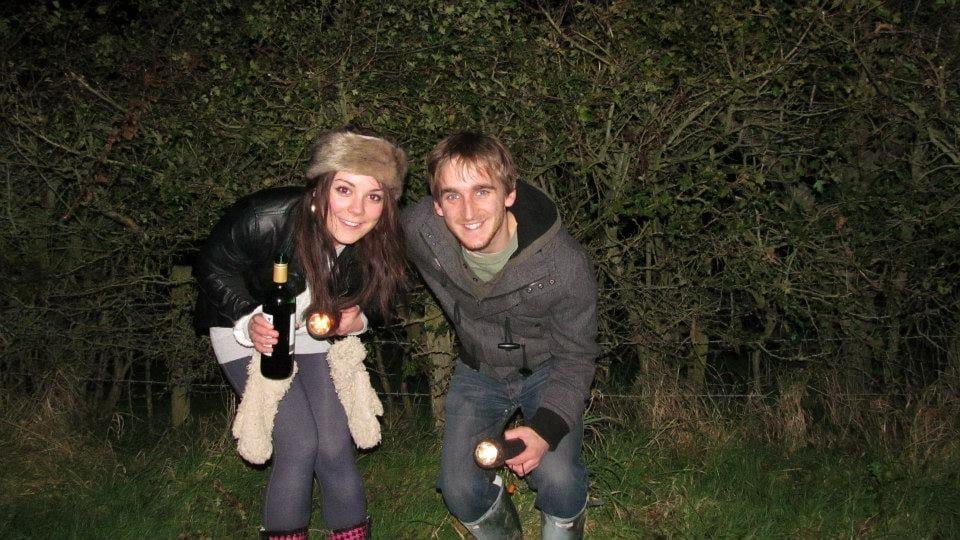 If I thought I’d feel sad or bored boozing alone, I was wrong. I had obviously underestimated the humour to be found in watching Jon ordering a ginger beer, then swigging it as though it was a Stella while I knocked back a G&T.

In fact, so enjoyable was the show that when I ordered a round – much cheaper now one drink’s a softie – I made mine a double.

A few days on, we’re in a similar situation. Jon orders a ginger ale, musing: “I wonder what the difference is between ginger ale and ginger beer.”

Riveting stuff, indeed. For anyone who’s interested, the answer is: not much.

Despite the decline in conversational excitement, as the month wears on I’m still thoroughly enjoying myself.

Jon discovers alcohol-free Becks and with it a new lease of life for his challenge, declaring: “it even smells the same!”

However, I start to find that, on occasions while I’m drinking and being hilarious, Jon is finding me less so. When one of my gin-induced gags goes down like a sack of shit (admittedly it’s an impression of the Who Wants to be a Millionaire ‘coughing’ scandal, not my finest) I can’t help but think: if you were drunk you’d know that’s funny.

The days trickle by in the standard January crawl. I realise that, in group boozing situations, I become drunkenly overprotective of ‘sober Jon’. I’m plagued by paranoia that he might be bored or feel left out.

Just to clarify, Jon absolutely feels neither of these things; it’s just my blurred perception that is making me forget he is in fact A GROWN MAN and capable of enjoying himself without my help. 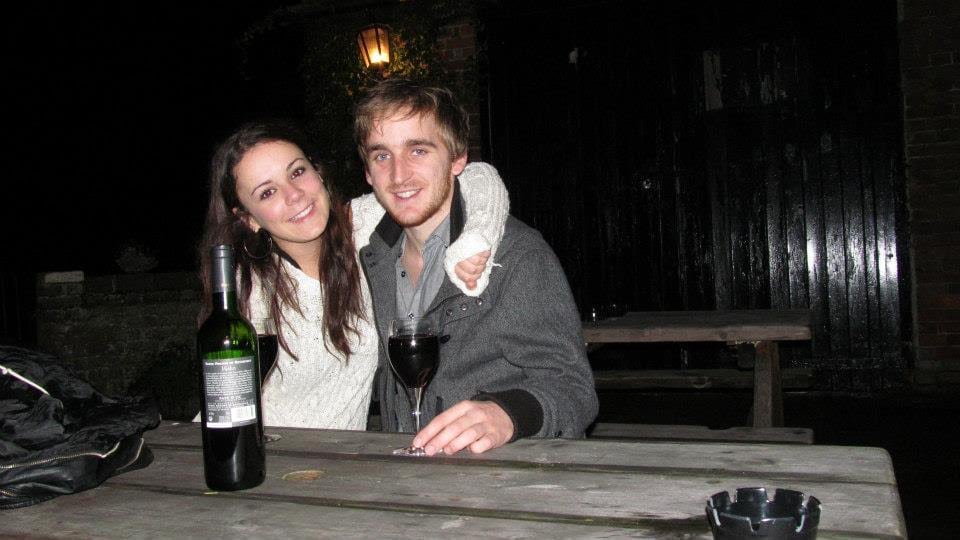 And, according to Jon, me breathing ‘wine fumes’ over him from all angles wasn’t particularly pleasant either.

Bumping nasties (in the most literal sense) aside, I do notice that we are putting more thought into our weekday activities as a couple. As we slog through the teens and into the twenties of Jon’s Dry Jan, there is barely a museum in London left unturned and we’ve gone on a lot of leisurely, chatty strolls together.

It’s a happy realisation that the challenge of Jon’s sobriety hasn’t created a black hole in our relationship and that we can survive as a couple without alcohol propping us upl.

By January 26, Jon is starting to see some of these fabled ‘benefits’ come to life. And I’m jealous.

He’s lost nearly half a stone and is able to comfortably run 10 miles while I’m still working to shift my Christmas muffin top.
Plus, he reckons he’s saved a good £200 from not drinking at least. Meanhwhile, I dip further and further into my overdraft, groaning with every contactless tap…

And with his noticeable results comes smugness.

One hungover Sunday after a gin-swilling night with a pal I meet Jon and we have to ride no less than three rail replacement buses in the space of two hours. Jon is fresh as a daisy and more than capable of handling the rogue roundabouts and the elderly lady who’s quizzing us about where we’re off to and telling us where her grandson’s off to with a dazzling smile. Slumped opposite him, I’m gulping back saliva and trying not to lash out at said pensioner.

As the month draws to a close, I realise part of me will miss the sympathetic glances and ‘poor you’ murmurings mutual pals sent my way when they heard my guy had gone dry. 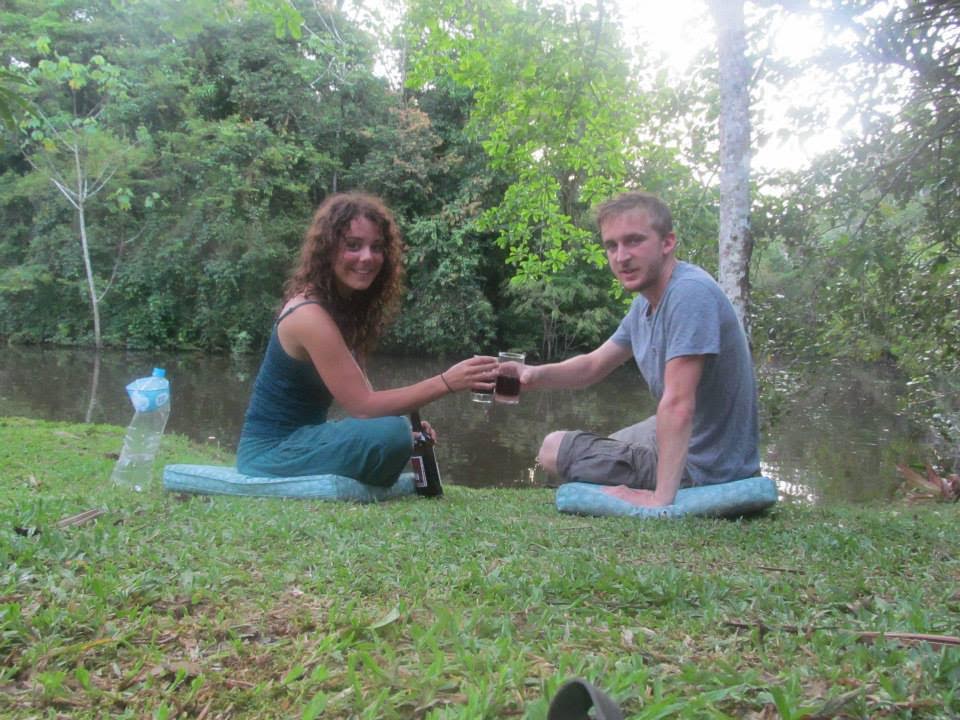 The attention made me feel like I was noble for sticking by Jon through the tonic and limes, as though he was seeking help for a drug addiction rather than just shelving the Stellas for a month.

On some level, I’m so impressed Jon has stuck to his guns that it’s made me more attracted to him; maybe it’s a primal link I’m making between strong willpower and strong swimmers, or something.

But, mostly, now February has finally rolled round, I’m ECSTATIC.

I can’t deny that booze is a bit of a bedrock in our lives together. I can’t wait to hear my boyfriend drunkenly demand ‘Jonny want beer’, slug roadies on the tube and grin at each other with tombstone vino teeth.

Though he says it ‘wasn’t hard at all’, I know Jon is equally glad to see the back of Dry Jan.

It’s a relief to know my Mocktail Monk has regressed back to Jonny 2 Beerz – the way I prefer him.