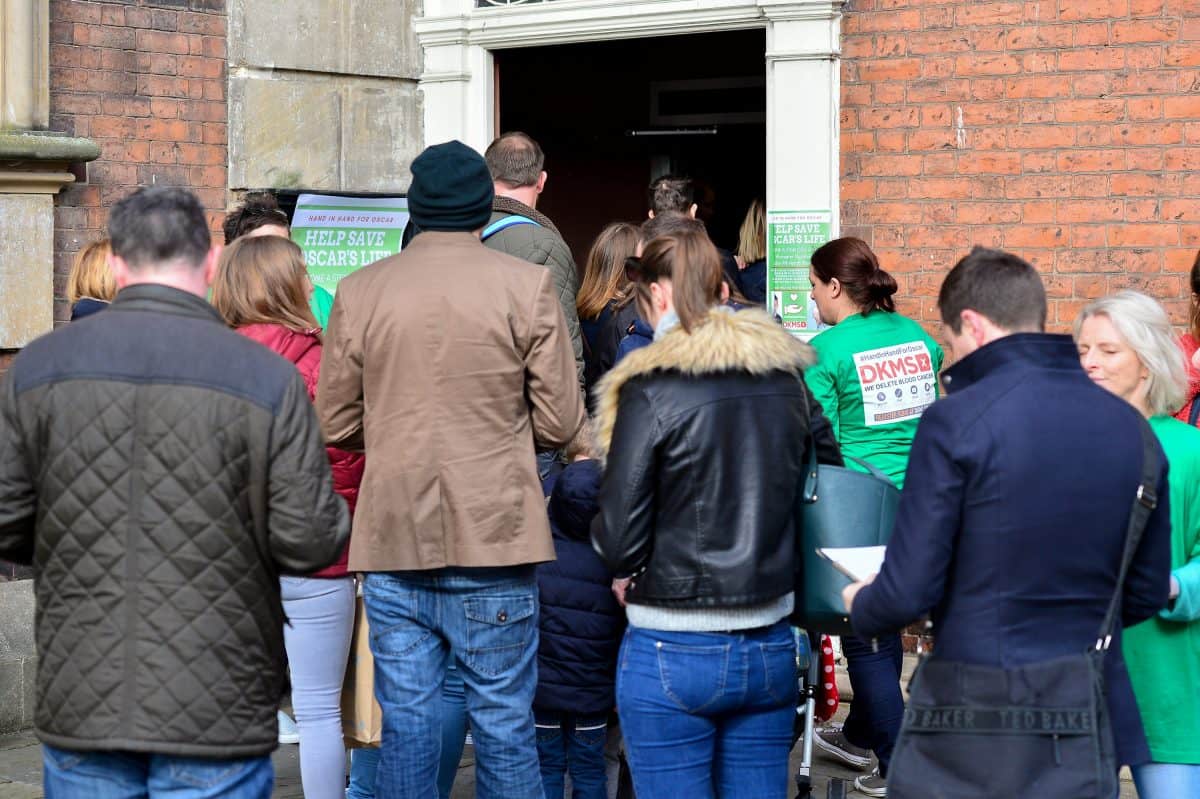 A staggering 6,000 strangers have now been tested to see if they were a match to help a five-year-old boy fighting a rare cancer.

It followed last weekend’s event where 4,855 people queued through the rain at Pitmaston Primary School, in Worcester to see if they were a match.

DKMS, the charity that tests the swabs, said its previous record for the highest number of people to take part in a registration event was 2,200 people.

More than £400 was also raised for the BKMS charity through cake sales and donations.

Among those being swabbed were Worcester MP Robin Walker and Mayor of Worcester Jabba Riaz.

The youngster is in a race against time to find a life-saving stem cell donor after he was diagnosed with rare cancer.

His parents became concerned when severe bruising turned out to be T-cell acute lymphoblastic leukaemia (T-ALL).

Doctors say he now has just three months to find a stem-cell match which could save his life.

Mum-of-two Louise White, 35, of Worcester had helped to organise the event on Saturday (9/3).

She said: “My friend works for visit Worcester and she was asked if the Guild Hall would be a good place to do a DKMS event.

“I ran it past Oscar’s mum Olivia and she asked me if I could organise it, so I said yes.

“This has been a few weeks of planning, it’s really snowballed in the last week.

“We put lots of requests out on social media for volunteers and we’ve got about 50 adults and some students helping out with the stewarding and handing out refreshments.

“We’ve got around 2,000 kits today and a couple spare just in case.

“I’ve got two children myself, my son went to pre-school with Oscar, it’s quite hard to see the pictures of him in hospital.

“It’s overwhelming how kind people are and how much they care.

“People are asking how long will it take for us to find out if Oscar has a match, what are the chances of him finding a match, it just shows how much people care.

“It shows that people are willing to give up their time and so much to help this little boy, it’s just so lovely.

“Oscar’s parents are not here at the event they’re at Birmingham Children’s Hospital.

“I should they are overwhelmed by all the support, Olivia messaged me this morning to say thank you.

“They are just really touched that so many people are coming to register, they want to save Oscar but as well as raise awareness about this.”

Mum-of-one Jo Martyr, 47, of St Johns, Worcester, said she wanted to help Oscar in any way she could.

She said: “The common link is that it’s mostly mum’s from the community, there are other people here that just want to pull together.

“It’s kind of grown exponentially really, a lot of us have even met before, we’re all joining up via social media to rally the troops.

“We’ve got t-shirts printed, flyers, children from other locals schools and folks are here from DKMS.

“I’ve never seen anything like this before, I’ve never been involved in something so remarkable, so wonderful but so bittersweet.

“But out of this drive to save little Oscar, so many of us have come together.

“The mayor and MP Robin Walker are here too which is wonderful.

“My son is in the same class as Oscar, there is only four days between them and they were born in the same hospital – it just really hits home.

“I know Oscar and his parents, I wanted to offer what ever I could.

“There is a lot of kick-ass women making some difference today but we just really wanted to pull everyone here today to help Oscar.”

Oscar’s desperate parents Olivia Saxelby and Jamie Lee, of St Johns, Worcester, launched an appeal to find a match after his diagnosis.

They aimed to get as many people as possible to sign up to a blood stem cell donor register as part of a campaign called ‘Hand in Hand for Oscar’.

Olivia, 23, said: “We felt like we could not see light at the end of the tunnel, but when looking at Oscar’s cheeky smile, bravery and determination, we managed to pull our strength together again.

“From that moment of fear and confusion, we as a family became stronger than ever. Oscar reminded us how to fight again and just how courageous he is.

“Not once has he shown weakness, nor has he ceased to amaze us throughout the most difficult times and that to us is a true warrior.

“Oscar is a fun, loving, energetic five-year-old boy who deserves to live to the full alongside the other troopers fighting such horrific diseases.

“Not only does he need to enjoy a normal life a child should live, he now needs someone else to save him.”