When activated by UV (ultraviolet) light the 'bio-glue' immediately forms a complete seal, even on wet tissue - eliminating the need for staples or stitches. 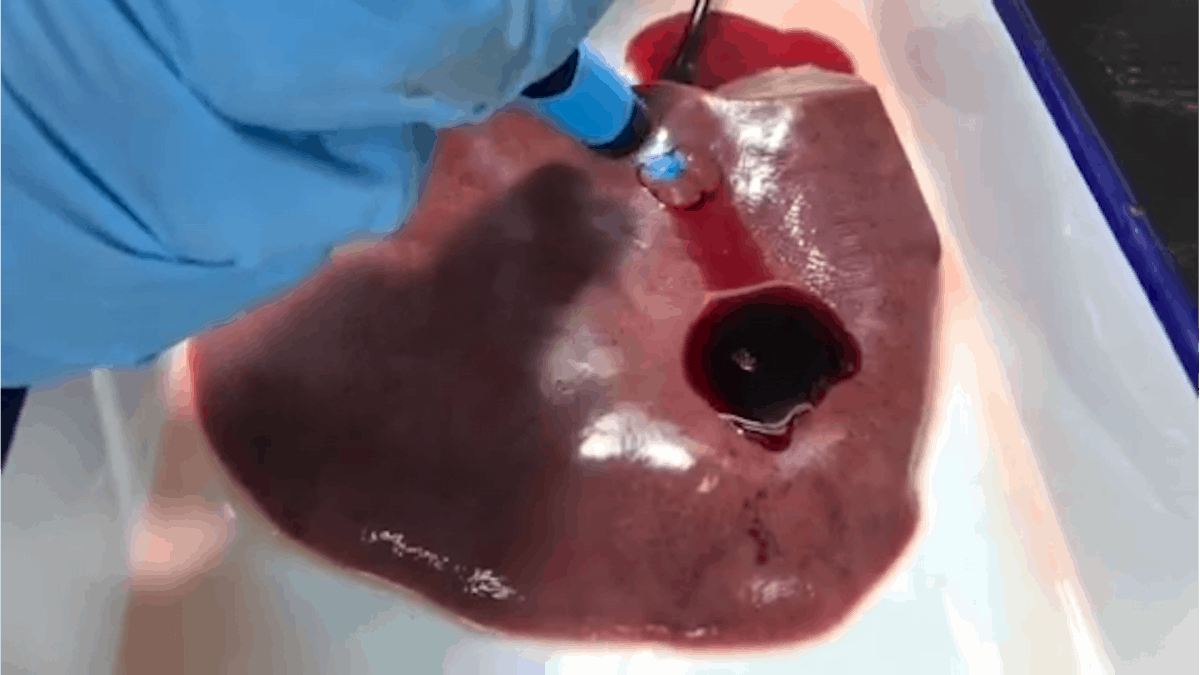 A miracle superglue that heals potentially fatal wounds in seconds has been developed by scientists.

The powerful gel may prevent heart patients from bleeding to death on the operating table or save the lives of those terribly injured in warzones, terrorist atrocities or serious accidents.

When activated by UV (ultraviolet) light the ‘bio-glue’ immediately forms a complete seal, even on wet tissue – eliminating the need for staples or stitches.

In experiments it closed up incisions and holes in the blood vessels and organs of pigs up to 6mm wide – in just 20 seconds.

Corresponding author Professor Hongwei Ouyang hopes it will be available for human use in three years.

The new glue provides a waterproof seal that is bonded simply by shining UV light upon it.

Until now, medical glue has not proved strong enough to withstand the forces inside the pumping chambers of the heart or major blood vessels.

Explained Prof Ouyang: “Uncontrollable bleeding is a major problem in surgical procedures and after major trauma.

“Existing clotting substances poorly control haemorrhaging from traumatic arterial and cardiac wounds because of their weak adhesion to wet and mobile tissues.”

In laboratory experiments the system closed up liver wounds to pigs almost instanteously.

Similar surgical procedures using the hydrogel then repaired the same species’ hearts – without the need for stitches.

Afterwards, three of the pigs were monitored for a two-week period and they made a full recovery – with no abnormalities or side effects.

Prof Ouyang, an expert in regenerative therapy at Zhejiang University School of Medicine, Hangzhou, China, said: “We chose pigs because their organs are a very similar size to people’s.

“This glue could be used in a human surgical setting in three to five years. Current commercial medical glue cannot handle heart bleeding.”

The gel described in Nature Communications contains water, gelatin and a cocktail of chemicals that is injected into the injured tissue.

These help to mimic the support structure of cells called the ‘extracellular matrix’, a complex composition of proteins and other molecules.

When exposed to UV light, the glue sets rapidly.

He added: “The triggered hydrogel is like rubber. We can even say it is like a connective tissue.

“The components and mechanical properties of the hydrogel mimic those of human soft tissues.”

Prof Ouyang said potential applications are limitless – from surgery to the battlefield or civilian catastrophes, either accidental or deliberate.

He said: “Yes, it can be easily applied in any condition and can stop any serious bleeding which current medical gel products cannot stop.”

Further studies are now being planned to confirm the safety of the glue in further tests – including those involving humans.

Prof Ouyang said: “The next step is to finish the pre-clinical data and get official approval for a clinical trial.”

Gel-based solutions require both strong adhesion to the wet tissue and the strength to resist high blood pressure and the movement of a beating heart.

He said: “This hydrogel can undergo rapid setting to adhere and seal bleeding arteries and cardiac walls after UV light irradiation.

“Most importantly, the hydrogel can stop high pressure bleeding from pig carotid arteries with 4 to 5mm long incision wounds and from pig hearts with 6mm diameter cardiac penetration holes.

“Treated pigs survived after treatment with this hydrogel, which is well-tolerated and appears to offer signiﬁcant clinical advantage as a traumatic wound sealant.”

“The wounds were stably sealed by only using matrix gel within 20 seconds – without stitches.

“With a UV ﬂashlight or an optical ﬁbre, this material can potentially be used for completely stitchless sealing, which make it a promising bio-glue for use in surgery and emergency clotting.”