James O'Brien, 44, was blinded in his right eye at the age of 18 after he was sprayed with ammonia by a teenager in a random traumatic attack 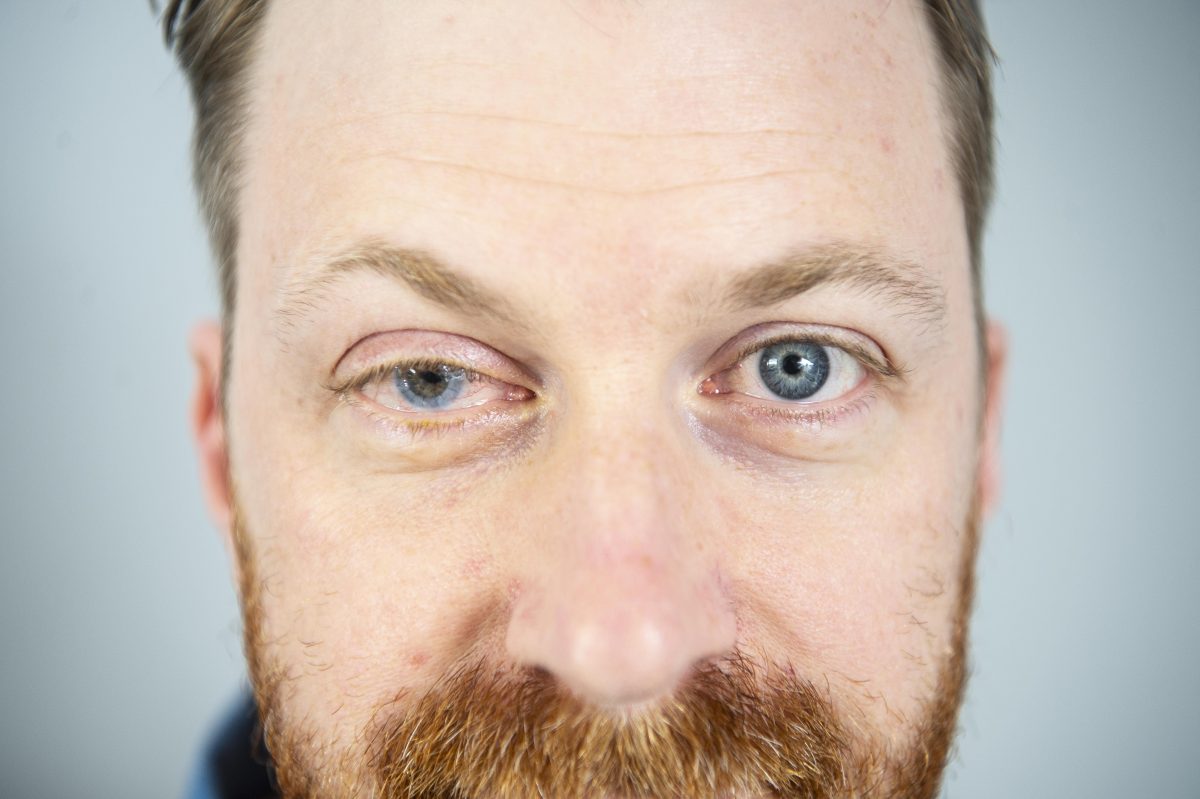 A dad-of-two has miraculously had his sight restored through a pioneering stem cell treatment – 25 years after losing it in an horrific acid attack.

James O’Brien, 44, was blinded in his right eye at the age of 18 after he was sprayed with ammonia by a teenager in a random traumatic attack.

More than two decades later, the married project manager has become the first patient to undergo life-changing eye surgery on the NHS.

James said: “Being able to see through both eyes after all these years means the world to me.”

Doctors were able to restore his sight in his eye using stem cells from his healthy left eye, which were grown in a lab in Modena, Italy, for six months.

Stem cells are basic cells that can become almost any type of cell in the body.

They provide new cells for the body as it grows and replace specialised ones that are damaged or lost.

Last year surgeons at Moorfields Eye Hospital in London then cut the scar tissue from James’ right eye and replaced it with the stem cells.

They waited a year, giving the tissue time to bed in, before inserting a cornea taken from a deceased donor to complete the process in June and restore his sight.

James, who lives in York with wife Lisa, 40, said: “It’s the little things I’ve appreciated the most, like being able to see my wife and children clearly for the first time.

“It’s fantastic and has definitely improved my quality of life.

“Before I could barely see the chart with all the letters on, now I can see the third line down and it’s only going to get much better.

“When I go cycling now I can look over my shoulder and see what’s coming, which helps.”

James and Lisa have two children together, a six-year-old daughter and a four-year-old son.

The horrific acid attack happened in the Sutton area of London in the late 1990s when James was walking home from the cinema with a friend.

He says he was approached from behind by two teenagers, one of whom he recognised as being a younger student at the school he went to.

Completely unprovoked that boy then sprayed acid in James’ face and began “laying into him”.

“One of them sprayed me in the face and it felt like my face was on fire, I thought I was going to die,” James said.

“The pain was really intense.”

Acid ended up in both of James’ eyes, his nostrils and his mouth.

Luckily a passerby who saw what happened rushed over and used water to wash some of the ammonia away, which James says may have saved his left eye.

He was rushed to hospital and spent two weeks on various eye drops and medications designed to minimise the damage.

However, doctors told him early on he was likely to have suffered permanent damage.

“It was a traumatic thing to go through, particularly at such a young age,” James said.

He added it was a ‘completely random attack’, saying, “I was just in the wrong place at the wrong time”.

Having recognised the attacker James was able to identify him to police and the teen spent a number of years in a Young Offenders Institute, according to James.

Prior to the surgery James’ right eye was heavily scarred but part of the operation involved surgeons smoothing out the scarring and making the damage there before far less pronounced.

“This has had a really positive impact in terms of how I feel about myself,” James said.

He added: “There were times before when children would look at my eye and recoil in horror.

“Obviously I didn’t take it personally but it’s nice for that not to be an issue anymore.”

The operation which James underwent cost the NHS around £92,000, including the cost of sending the cells to Italy.

He first heard about it from consultant ophthalmic surgeon Dr Sajjad Ahmad, who went on to perform the procedure last year.

James said: “He told me about this clinical trial that could help with my sight and I didn’t think twice about it, I was well up for it.

He added: “It feels good to have been part of of an important process like this in its earliest stages.

Dr Ahmad said: “James – in a crude sort of way – kindly accepted to be the guinea pig for this treatment.

“Because of what he’s done, it will now enable us to offer it to everyone who needs it.

“This is going to have a huge impact. A lot of these patients are young men so it affects their work, their lives, those around them.”

Dr Ahmad said he sees a number of acid attack victims every week.

The surgeon hopes to develop the procedure for patients blinded in both eyes by acid as well as for people with degenerative eye conditions.

The National Institute for Health and Care Excellence (NICE), which decides which treatments are available on the NHS, have approved the treatment for all eligible patients.