The history of the shuffleboard game dates back to 15th century England. Back then, it was known as shove ha’penny – a pub game where players would shove silver pennies across a wooden table. In time, the game became more popular and started appearing in country houses across England. Three centuries later, the English colonies […] 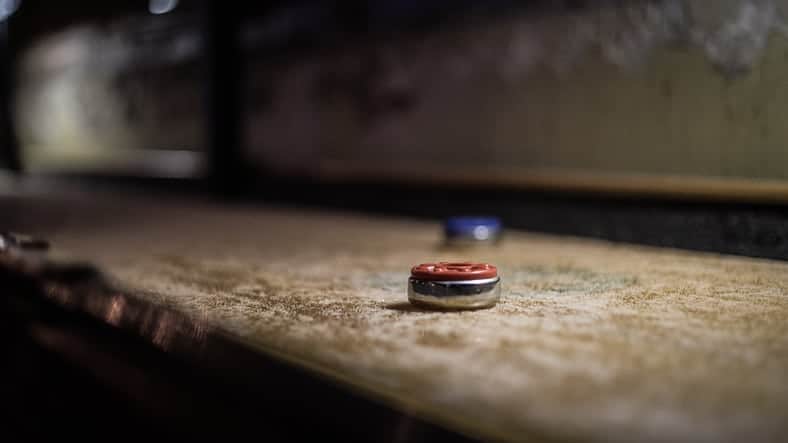 A disc of a deck shuffleboard.

The history of the shuffleboard game dates back to 15th century England. Back then, it was known as shove ha’penny – a pub game where players would shove silver pennies across a wooden table. In time, the game became more popular and started appearing in country houses across England. Three centuries later, the English colonies in North America were playing the shuffleboard game.

But shuffleboard hasn’t been relegated to the history books, as it’s seen a resurgence in recent times on both sides of the pond. The Burdock pub in London, for example, has shuffleboard as one of its main attractions alongside the drinks, whilst in America, the Royal Palms Shuffleboard Club in Brooklyn is highly noted for its shuffleboard tables.

If you’ve never played a shuffleboard game before but you want to, you came to the right place. We’ve prepared a few tips that will get you ready for your first table shuffleboard game. To be able to put these tips into practice, there is a great selection of shuffleboard tables that you can choose from, if you want to play at home. These are often ideal as the centerpiece of a games room, and with finance options available these are often reasonably priced to fit in the home. Otherwise, simply find a local pub that has a shuffleboard table and you’re set.

Before we get onto the tips, however, there’s just a few things to cover. For starters, if you’ve never actually played before, then you’ll need to know the rules. Traditionally it’s either played with two or four players (two teams of two), and the first to either 15 points in a two player game or 21 points in a team game. You score points by shooting the puck down the board to the score zone in each round, and the puck furthest down the board is the winner of the round.

Shuffleboard tables come in a variety of sizes, from 12 and 14 foot tables to a whopping 22 feet for a shuffleboard table, so shooting the puck down the shuffleboard table can often require a lot of skill to ensure that you get it into a decent scoring position. But what else can you do to improve your game? Here are some more tips for you to consider:

Shuffleboard may be a strategy game but in order for you to put your strategies into play, you have to prepare the field. In order to do so, you’ll need to properly wax the board. The first step to achieve the best results is to wipe the board clean of old wax. Take your time. If the table is yours, there are lots of options for you to choose from when picking the wax. If you’re at the pub, use what they already have there.

Learn How to Aim

A good aim is one of the keys to winning a game of shuffleboard. A bad aim will lead to more losses than wins. You will obviously need to practice your shots as much as possible but for starters, you just need to know how to release the weight. A great release is formed by a balance between power and timing. From the start, you will notice that holding onto the weight for longer will improve your accuracy considerably. You should always watch each of your shot carefully. Remember the amount of strength you used, the distance it traveled, and the line it followed. If you’re happy with the initial shot, try to repeat it as closely as possible. If you’re not, make adjustments to your power and follow-through until you get it right.

Once you’ve improved your aim considerably, you can start using more complex strategies. Using the rail to your advantage is always a great option. You will have to use more power in order for the weight to reach further after it hits the rail. If you’ve ever played pool, you’ll know how this works. One thing to keep in mind is the angle. You will need to plan your rail shots based on this. Choosing the right angle could mean the difference between a win and a loss.

Rushing your shots is never OK. Nor is it needed. Take your time. Plan the shot based on the outcome you’re looking for: scoring points or shoving the opponent’s weights. Squat to get a better view of the board and see where and how the wax is spread out. Don’t forget that the game allows you to toss extra wax shavings if you deem it necessary.