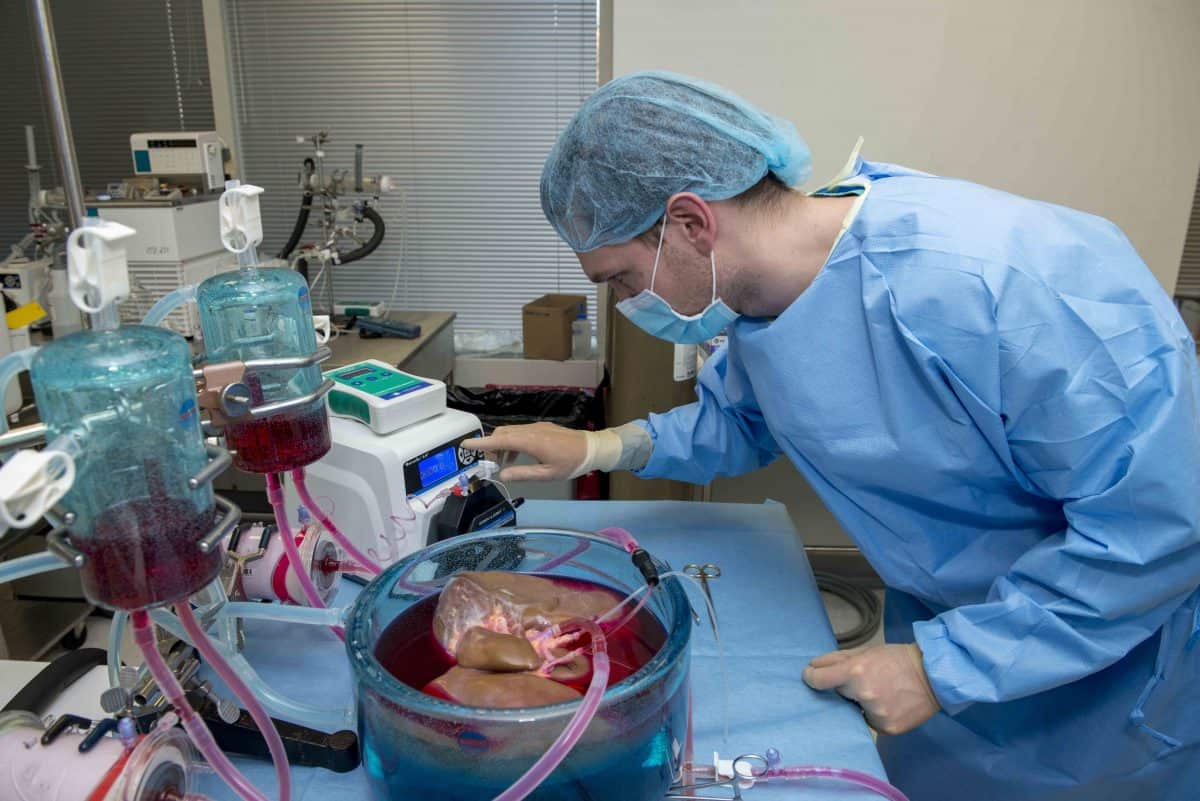 A breakthrough has kept livers working outside the human body for 27 hours – three times longer than normal.

Scientists say the pioneering technique will revolutionise transplant surgery – overcoming the main cause of the donor organ shortage crisis.

It provides doctors and patients with a much longer period in which life-saving operations can be carried out.

Previously, livers were only viable for an average of nine hours.

Now the US team has dramatically extended this by preserving them at sub zero temperatures using a process cooled ‘supercooling’.

Dr Seila Selimovic, director of the National Institute of Biomedical Imaging and Bioengineering which part-funded the study, said: “Delivering organs to matching recipients within the window of viability can often be the most challenging aspect of organ transplantation.

“By giving doctors and patients more time, this research could someday affect thousands of patients who are waiting for liver transplants.

Medics have been forced to rely on ice boxes to keep livers ‘fresh’ for the past 40 years.

Donor livers currently have to be kept at 4 °C – which dramatically limits their shelf life.

Professor Korkut Uygun and colleagues had shown keeping rat livers at minus 6 °C extended this – but a human’s is 200 times bigger.

The new method, described in the journal Nature Biotechnology, stops them freezing at minus 4 °C – extending the life of the donor organs to 27 hours.

They used a technique called subnormothermic machine perfusion. It continuously pumps oxygen and nutrients at about 20 °C through the liver.

Like a glass container broken by frozen water, when cells freeze they often experience irreparable damage.

Since human cells are especially sensitive, donor livers are stored above freezing.

As a result, doctors can typically only preserve human livers for nine hours before the chances of a successful transplantation drastically decrease.

This makes it more difficult, -and sometimes impossible – to get the organs to compatible patients who are located farther away.

The rat experiments involved adding a compound found in antifreeze to a protective solution cooled the livers.

But it was unsuccessful when applied to much larger human livers. The size difference significantly increased the risk that ice crystals would start to spontaneously form – making the organ unusable for transplantation.

“Before, there were a lot of experts who said, ‘well this is amazing in small rats, but it will not work in human organs,’ and now we have successfully scaled it up 200 times from rat to human livers using a combination of technologies.”

First, the livers are submerged in the supercooling protective solution. The risk of ice crystals forming greatly increased in areas where the solution was in contact with air.

So the scientists removed the air from the storage solution bag beforehand – effectively eliminating the chance of this happening on the surface of the organ.

To protect the liver cells they then added trehalose and glycerol – chemicals used in the cryogenic preservation of cells in the laboratory but never before tried in transplant organs.

Finally, instead of flushing the preservation solution through the tissue like in most trials they used machine perfusion.

It delivers oxygen and nutrients to capillaries in biological tissues while outside the body.

They then slowly lowered the temperature while increasing the concentration of the new protective additives.

The staggered approach allowed the liver tissue time to adjust and the solution – which is thicker than similar cocktails of chemicals – spread throughout the organ more uniformly.
The researchers have yet to implant a liver preserved using this new method into a human subject.

Dr Averell.Sherker, a liver expert at the National Institute of Diabetes and Digestive and Kidney Diseases which also part-funded the study, said: “With further research, organs will be able to travel greater distances and benefit the most critically ill patients requiring liver transplantation.”

Liver transplants are required when the organ is diseased or damaged to the extent it cannot perform its normal functions, which is known as liver failure or end-stage liver disease.

The liver can become gradually damaged as a result of illness, infection or alcohol.

This causes it to become scarred, which is known as cirrhosis. Inflammation, tissue death and cancer can also result in a transplant being required.

In 2015, 611 patients were on the waiting list for a liver transplant in the UK, NHS England statistics show. Up to 18 per cent die while waiting.

In the US, nearly 17,000 people are waiting for a new liver, according to Columbia University’s Center for Liver Disease and Transplantation.

A donor liver can be removed from a person who has recently died or a section of the organ can be taken from a live donor. This is because the liver can regenerate into a normal-sized organ.