The world over, French food is best known for its Michelin-star variety: the theatre of a carved duck, the delicacy of îles flottantes, the flames of a Crêpes Suzette. But in the northwest corner of France, nearer to its Celtic cousins than other parts of the country, such pomp doesn’t fly in Brittany. Here, the […] 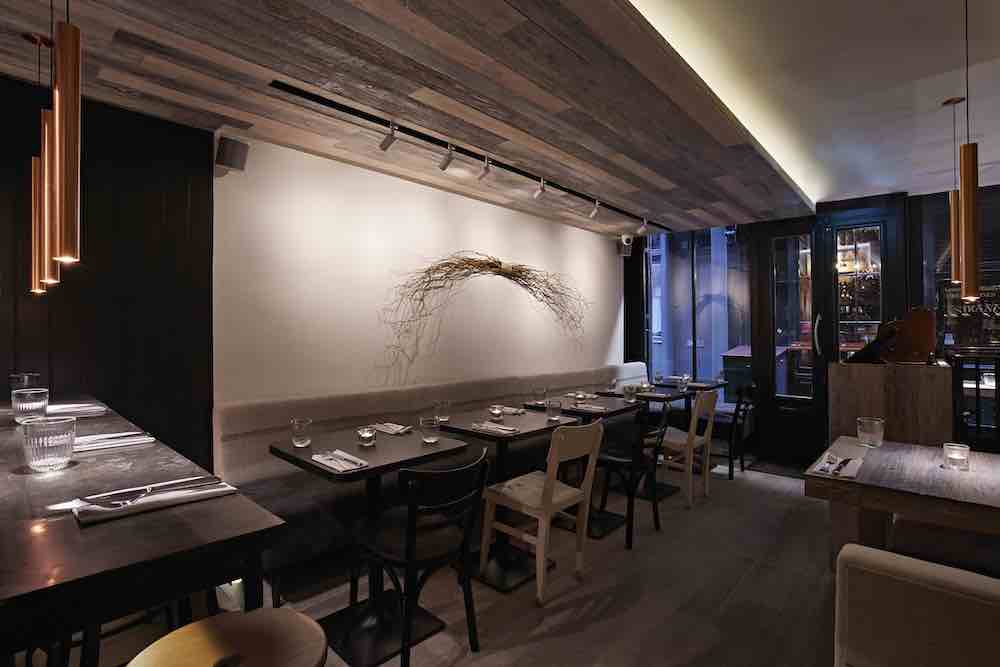 The world over, French food is best known for its Michelin-star variety: the theatre of a carved duck, the delicacy of îles flottantes, the flames of a Crêpes Suzette. But in the northwest corner of France, nearer to its Celtic cousins than other parts of the country, such pomp doesn’t fly in Brittany.

Here, the order of the day is on the fresh seafood that surrounds it and – because of the colder climes, hearty food doesn’t go astray either. That’s why galettes took off the way they have, as well as their sweeter cousins, crêpes.

As distinctly Breton as the stripey jumper, it’s not hard to guess where Parisienne owners Emilien Lesourd and Vincent Couvreur spend their holidays. But with their restaurant in a narrow passage in the old part of Spitalfields, with one of the UK’s highest concentration of restaurants around it, they know that ham and cheese galettes won’t cut it. So in the this dinky restaurant, we see a reinvention. Or to put my French A-Level to good use, une réinvention.

It doesn’t take much to imagine this small restaurant in its Victorian days, back when cars didn’t exist and personal space was a luxury for the upper classes (probably). Now it’s a place where rents are astronomical, so rows of tables squeeze in together on the ground floor, with the bar at the back; downstairs is mildly roomier. If the Japanese-style screens and minimalist greenery suggested an oriental sub-theme, a quick look at the menu verifies this.

Not only have the team ‘fancified’ a typical Breton menu but there’s some completely new twists, like the maki rolls (£6.50-8.50). Made of rolled galettes and a filling – mine was the thin coating of aubergine topped with hummus, red pepper and greens – it’s presented like a sushi roll. As inventiveness goes it’s a nice touch, though a Gallic version of soy sauce wouldn’t have gone astray to moisten the rolls. I tend to like dipping food into other food, maybe that’s just me.

Galette gastronomes have even more to choose from with the main. As my Breton dining companion insisted I should, I drained the last of my ice-cold Baron de Badassiere Picoul de Pinet (£7.75, and badassiere is about right a description) to do it the traditional way, with a mug of Breton cider (£14 for 750ml). It was in analysing the large bottle of Cidre Bouche Breton Brut that I caught sight of the company’s domain extension: .bzh. It turns out that as Scotland is to the UK and Catalonia is to Spain, so Brittany is to France. And while independence remains a distant dream, getting its own domain extension was a small win. Bubbly on the tongue, medium-dry and packing a punch of flavour, the .bzh cider was exactly right for both the sweltering weather that 2018 will be remembered for, and the dishes to come.

So to the fancified food. While there are meaty mains as an alternative, galettes are its specialty. I couldn’t resist the asparagus and wild mushroom galette (£12), which came topped with salad, a light drizzle of Hollandaise sauce – exactly the right amount, which spoke of the chef’s knowledge of balance. The best sign that it was a dish that had been tasted and tasted again were the small slivers of asparagus melted in with the cheese filling. How wonderful to unexpectedly bite against the soft crunch of these tiny cuts within the creamy galette – that’s attention to detail that earns repeat customers if not Michelin stars.

My companion is a Complète obsessive, but here, the cheese, ham and egg filling was upgraded to Comté cheese, maple-cured bacon and duck egg (£10), folded into a square parcel with the large, deep-yellow yolk at its centre. A man of few words, it said enough that the plate was clean at the end, and there were no grumblings of how galettes should be.

Faced with any other dessert menu, I might have called it a day but it wasn’t so much calling my name as whispering to me alluringly. Completely stuck and wanting to order everything, we opted for traditional and contemporary, with the apple crepe (£5.50) and chocolate maki rolls (£5.50) respectively.

Using the same principle as the starter, the chocolate rolls arrive like a mini arctic roll, with cold chocolate cream wrapped in the galette, with a blob of chocolate on top. The highest-grade of raspberries came as an accompaniment, but that was the only real moisture of the dish; a small dish of crème anglaise would have gone down a treat – more than the starter, it was dry enough to coat the roof of my mouth, and I’m pretty sure there was more cream in it than I’d accounted for in the gym earlier that day. Not going to lie, it was a little gutting to have picked wrong on a dessert menu that tempted with a citrus cheesecake, lemon and blueberry soufflé and rhubarb and strawberry galette. What could have been.

Instead, I ‘helped’ my companion with his dessert: a gorgeously chewy, expertly-thin crepe heaped with stewed sweet apples, drowning in vanilla butter, which quickly making vanilla butter my new favourite thing. Especially by comparison, this was spot-on. It barely needed the barely-burnt melting ice cream on the top, but we ate it anyway.

As a whole, it might not be completely traditional French food, but when it excels, I don’t think you’d find better in Brittany.