By Jonathan Hatchman, Food Editor, @TLE_Food   A mere stone throw from London Bridge station, Tooley Street’s Fire Station has been saving lives and protecting properties since 1879. And although no longer serving as a Fire Station, the Bar & Bistro that now take residence upon the site do maintain some similar values. The […] 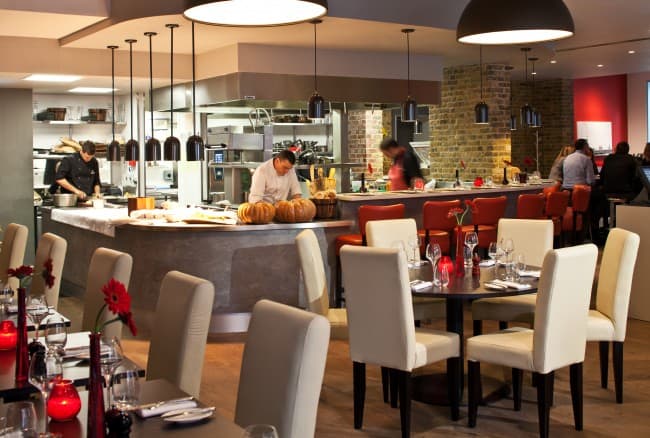 A mere stone throw from London Bridge station, Tooley Street’s Fire Station has been saving lives and protecting properties since 1879. And although no longer serving as a Fire Station, the Bar & Bistro that now take residence upon the site do maintain some similar values. The Brigade is not just a restaurant. It’s a social enterprise. Working closely with Beyond Food, a homeless charity that was also set up by The Brigade’s Chef founder Simon Boyle, the restaurant offers an apprenticeship programme to vulnerable individuals and those that have experienced homelessness, providing the chance for these individuals to gain meaningful employment.

Thus escaping the harsh Monday lunchtime breeze along the riverfront, we soon found comfort within the rather quiet venue, offering an open kitchen that I’m sure would’ve been much more dramatic upon a busier service, soft leather furnishings, raw brick walls similar to those trendy Brooklyn inspired bars and restaurants that are cropping up all over the City, as well as floor to ceiling windows that allow natural light to flood the dining area. Offering an extensive menu filled with gastro delights, with the starters selection alone making the choice very difficult, indeed. Containing the likes of Baked Scallop (£9), Crackling Cornish Mackerel (£8), Rabbit Fritters Pear with Apple Chutney (£8), and Scotch Eggs with Beetroot Piccalilli (£8). After at least ten minutes of being indecisive we opted for the Baked Scallop, cooked perfectly, served within its shell and coated with rich cheese sauce and a crumb topping. Offering a range of textures. As well as the salad of flash fried Squid rings and smoky Chorizo (£9) atop a bed of Rocket, dressed in sticky Balsamic Vinegar. Delicious.

Next up, the Seafood Risotto (£18) was delivered to the table with two accompanying bowls. One for finger dipping and the other to discard the shells of the Mussels, Cockles and Prawns, topped with a Parmesan Tuile and, ever so slightly unnecessary, Vegetable Tempura. Meanwhile, I took the opportunity to sample the ever-changing Apprentice’s Special. Today, the main consisted of pan-friend Duck breast, a Potato Rosti and Savoy Cabbage laced with Salty Smoked Bacon. On paper, this seems like a perfect combination, albeit topped with the rich BBQ sauce, it’s quite ironic that the main taste from a dish served within an old Fire Station is, in fact, overwhelming smokiness. The Duck was cooked perfectly pink, but a fruit or red wine sauce would’ve been a much more appropriate accompaniment. Thankfully, the dessert of Apple and Cinnamon fritters (£7) was much lighter and refreshingly fruity, never allowing the grease from the fryer to upset the dish’s sweetness.

Albeit a little pricey for a South-East London Bistro, the all day menu at The Brigade is still impressive, and the establishment’s noble social conscious, alone, makes a visit seem most worthwhile.

The Brigade can be found at The Fire Station, 139 Tooley Street, London SE1 2HZ