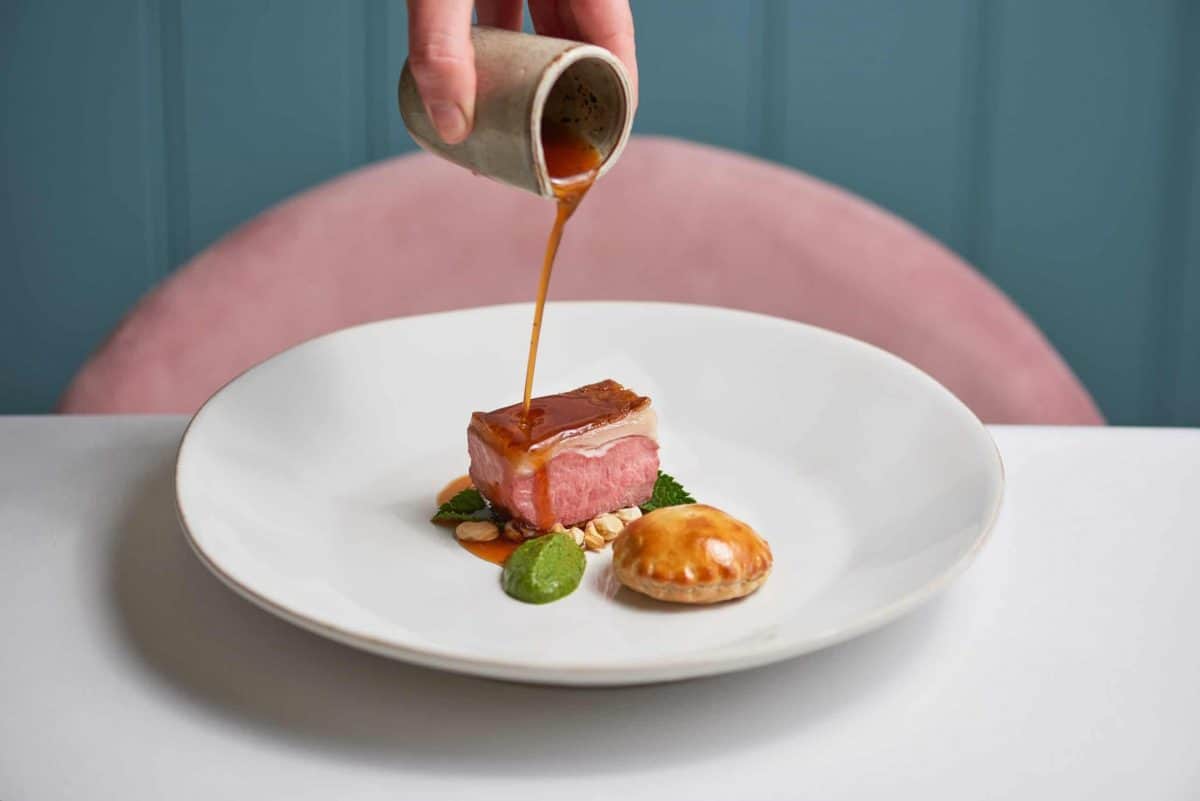 Considering the country’s bounty of exceptional produce, Irish cooking is severely underrepresented in London restaurants. Fortunately, the few excellent examples tend to go above and beyond with their entire operations. Daffodil Mulligan on Old Street is one example, set to re-open on 1st September. Myrtle is another. The first solo venture from chef Anna Haugh, Myrtle is partially named after Myrtle Allen – the first Irish woman to be awarded a Michelin star, back in 1975.

Opened last year, the restaurant is run by Anna Haugh, drawing on almost 20 years’ experience working in restaurants such as The Square, Pied a Terre and Hotel Lotti in Paris, and her cousin Daniel Haugh, who oversees front-of-house operations. In addition to tweaking the menu, some safety measures have been introduced since Myrtle re-opened last month. All staff wear face masks, hands and surfaces are regularly sanitised, and reduced table contact has also been implemented. Guests are offered sanitised hand towels throughout the experience, in addition to each table being equipped with a small vessel of hand sanitiser. The restaurant’s floor-to-ceiling windows are also fully retracted while open, with a handful of seats available for al fresco dining, while the indoor seating has been reduced to half – already limited with seats for just 37. Upstairs, the dining area is temporarily reserved and utilised as a private dining room.

Occupying a site on a residential street near the Fulham end of King’s Road, Myrtle is across the road from the Chelsea Funhouse. The location is especially suited to locals, not particularly ideal for anybody living east of Victoria, or at least along the three serving bus routes. But the food served is well worth travelling for – considerably better than typical of  neighbourhood restaurants. Enough to make Myrtle a destination restaurant in its own right.

Working with Irish based small-scale farmers, the menu at Myrtle champions sensational Irish produce, with dishes inspired by ingredients and dishes from specific regions. Nods to Haugh’s personality and background are very evident throughout the menu, but unlike those served at 99 percent of British restaurants, Myrtle’s tasting menu is never pretentious.

Offering seven courses, the ‘A Taste of Ireland’ menu is priced at £75 per person, beginning with gorgeous rings of glazed soda bread, plus Bia Beag (Gaelic for amuse bouche), which celebrates the potato in a variety of elegant iterations. Clonakilty black pudding from Cork was showcased in a dish which saw a small tube wrapped with a string of potato and quickly fried, complete with apple puree as a palate cleanser and Dunany spelt for textural depth. The black pudding, however, was the jewel in the dish’s proverbial crown, whipped with chicken mousse, which added exceptional depth of flavour and a softer texture more akin to morcilla. A definite highlight.

A nod to Haugh’s childhood, growing up in Dublin, smoked scallops had golden exteriors while soft in the middle, theatrically arriving under a cloche of smoke, amplified by some Taylors of Lusk garlic, gorgeously paired with thin slices of crispy Gubeen chorizo. The menu’s lamb main was another highlight. Three slices of rump were perfectly cooked, erring towards the rare end of the medium-rare, with the fat properly rendered; cloaked with a glossy sauce, finished with a small blob of broad bean purée and a miniature, refined take on a Dingle pie. Traditionally filled with lamb offcuts and vegetables, Myrtle’s take is more meat driven, while the superlative pastry rivals some of the most accoladed high-end pie restaurants in London. I’d happily eat a full-sized, family version all to myself.

The first of the menu’s sweet treats, a granita of sea buckthorn was a suitable palate cleanser, relatively simple but with bold tropical fruit nuances of mango and pineapple, plus some orange: like a very refined riff on a Solero ice lolly. Burnt cream, on the other hand, was similar to a crema Catalana, joined by exemplary rockscotti – not unlike biscotti, potent with orange and fennel, ideal for scooping thick cream.

So often an afterthought, bite-sized rectangles of banana bread were the best of the petit fours, crowned with walnut cream and candied walnuts, a nod to Anna’s father. Best washed down with the restaurant’s Irish Mist rampant with coffee and whisky. An elevated take on a classic, with profound attention to detail – just like everything else served at Myrtle.

Myrtle can be found at 1A Langton Street, London, SW10 0JL.