An opulent restaurant plying its trade in the shadow of Piccadilly Circus. And the daal, oh the daal. 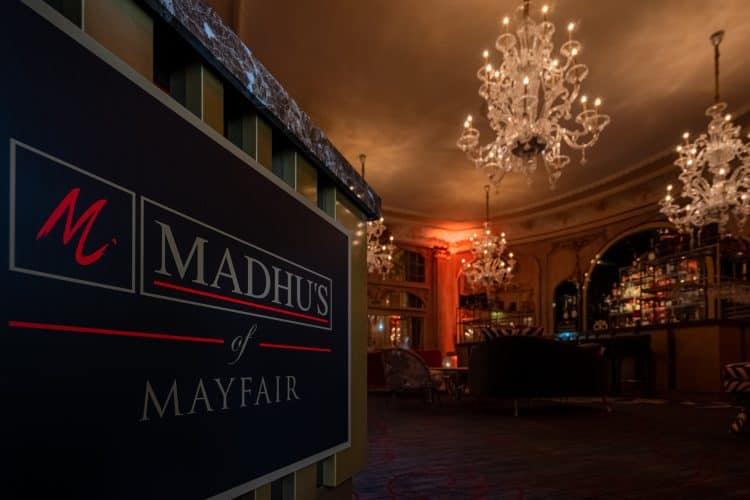 There was an unmistakable buzz in the air as we made our way up to Piccadilly Circus from Victoria Station one cool Friday evening. After-work crowds huddled outside pubs and tourists cooed as they passed London landmarks. Small groups gathered in Green Park to catch the last rays of the sun. The snowdrops and golden daffodils were a sure sign that the park, like the city, was starting to awake again.

Our destination tonight was Madhu’s of Mayfair at The Dilly hotel, a restaurant, I was told in advance, that brings a “revered reputation for high-quality dishes and refined service” and one that has catered, privately, for events hosted by HRH Prince Charles at Buckingham Palace and even Number10 Downing Street (although I didn’t spot anyone wheeling out suitcases of wine on the evening we were there).

The restaurant couldn’t be more centrally located, lying in the shadow of the bright lights of Piccadilly Circus and listing Fortnum & Mason, the Royal Academy and the Ritz among its neighbours. The Dilly hotel, boasting opulent Regency architecture, felt very grand and important, as did the bar at Madhu’s, which sports a jukebox back of liquors and spirits.

Usually, I have the same apprehension about restaurants in tourist hotspots as I do about those in skyscrapers, where substance, originality and quality can often be found wanting.  But my concerns were promptly allayed after I was brought a Tamarind martini served with a refreshing sorbet on the side, which complemented each other quite wonderfully.

There was also comfort to be found in the menu, which sported an array of authentic dishes not usually seen elsewhere. For the confused or, like me, the indecisive, there are helpful ‘M’ markings depicting the signature dishes, which served as a worthy guide from which we did not deviate. To start, a pair of small plates including Robata Chops, which were perfectly pink in the middle, and Chilli Paneer, which was a joy to eat. Vibrantly red on the outside and pristinely white on the inside the long cubes of cheese had a wonderful texture that was followed by a lasting flavour on the palette. The punchy heat was offset perfectly by a soft Carignan.

The main course brought a fresh round of innovative dishes, with a signature chicken thigh dish cooked in a rich sauce served next to Masala Fish, which is flavoured with roasted carom seeds. Madhu’s Makhani Dal was a dish of dreams. Slow-cooked over, I believe, 24 hours it was the perfect harmony of flavours. Velvety, creamy, buttery, it alone was reason enough to give this exciting restaurant a visit, served with cumin rice and bread with that typically alluring garlicy sheen.

The classic formula done well. Why oh why can’t we have more Madhu’s?