By Jonathan Hatchman, Food Editor, @TLE_Food   Before dining Mayfair’s Heddon Street Kitchen, my only Gordon Ramsay experiences had featured a man with a thunderous temper, shrieking profanities and hurling abuse at some poor, less competent chefs looking as though they were about to burst into floods of tears at any given moment. Not the […] 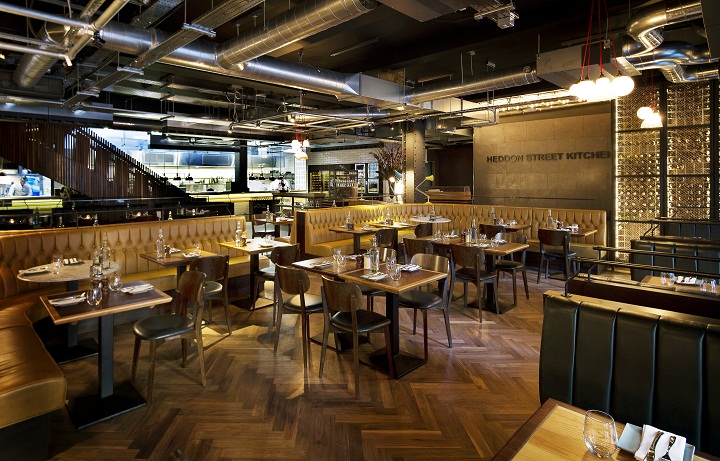 Before dining Mayfair’s Heddon Street Kitchen, my only Gordon Ramsay experiences had featured a man with a thunderous temper, shrieking profanities and hurling abuse at some poor, less competent chefs looking as though they were about to burst into floods of tears at any given moment. Not the most satiating of first impressions, needless to say.

However, the sheer quality of the food served up at the celebrity chef’s newest venture, alone, has earned Mr Ramsay a great deal of this writer’s respect. Tucked away from the hustle and bustle of Regent Street, hidden away in the corner of Heddon Street (hence the restaurant’s name), upon our seven o’clock entry the restaurant was surprisingly empty. Having been greeted by the friendly staff and seated within the main space, decorated as though taken straight from the pages of a Brooklyn interior design magazine, featuring plenty of industrialised uncovered pipes running across the ceiling, showcased by trendy oversized light bulbs. Starting with some of the restaurant’s acclaimed cocktails, both recommended by our proficient waiter for the evening, a Lady Regent (Hendricks gin, Rinquinquin peach, elderflower, lemon, mint) and the Heddon Street Grog (Bacardi Oakheart, Cherry Heering, pineapple, lemon, Bitters, sugar, Innis & Gunn original) served in a Tiki style tankard. While the starters of Potted salt beef brisket, grain mustard, piccalilli, buckwheat crackers and the beetroot tart, toasted pine nuts, goat’s curd (both £9.50) were equally as impressive. The tender brisket combined with thick, tangy piccalilli was a welcome treat, but the tart was the highlight. Having been constantly reworked since the November opening, it seems as though the chefs have finally found the perfect tart. Presented beautifully, comprising yellow and purple beetroot, caramelised onion and balsamic vinegar, placed upon a flaky slab of puff pastry.

It seems that following a handful of less than favourable reviews; the team at Heddon Street Kitchen have really upped their game (most probably following a few heated words from Ramsay, himself). This was proved even further with the delectable main courses, again recommended by the waiter due to an incredibly wide choice, settling for the Goosenargh duck (served pink, which is always a treat) dressed in a smoky pink peppercorn and lavender crust and the slow-cooked pork belly. Thankfully the lavender wasn’t too overpowering, served alongside a delicious fondant potato and a smearing of watercress purée, while the melt in the mouth pork belly found itself perched upon a bed of spiced apple sauce, topped with salty crackling that was to die for. For some strange reason we expected the main courses to leave us feeling only half-full so an order of chunky chips also seemed necessary. In fact, the double-cooked chips (not fries) were so chunky that a mere three or four felt similar in size to a whole jacket potato.

Following the mains I found myself so full that just the thought of dessert made me want to curl up under the table and cry like an ill-tempered toddler. However, the greedy inner child somehow managed to prevail and order the richest addition to the dessert menu: a chocolate fondant with amaretto ice cream. Needless to say it was enthralling. On the other hand, my companion decided to let the waiter choose on her behalf, once again, having come up trumps with the cocktails and mains. Ending up with the delivery of a board topped with small portions of three of the desserts on offer – Pineapple carpaccio with passion fruit and coconut ice cream, a sharp refreshing lemon tart served with blood orange sorbet, as well as a personal favourite – Pistachio and nougat semi-freddo which was a real show stopper.

Moral of the story? Don’t let pre-conceptions of Ramsay’s television persona prevent you from enjoying a great mid-range meal at Heddon Street Kitchen. Of course, Heddon Street Kitchen isn’t the finest of Gordon Ramsay’s twelve London restaurants, although remarkably impressive, but it’s safe to say that there were no Kitchen Nightmares experienced upon our recent visit.