The problem with the term ‘Pan-Asian’ is the somewhat stereotypical model of a restaurant that often takes various dishes and techniques from the likes of Japan, China, Malaysia, Thailand and Vietnam and crams them all into the same shallow pigeonhole, often ending up with a result that’s less than authentic. Opened on the ground-floor at […] 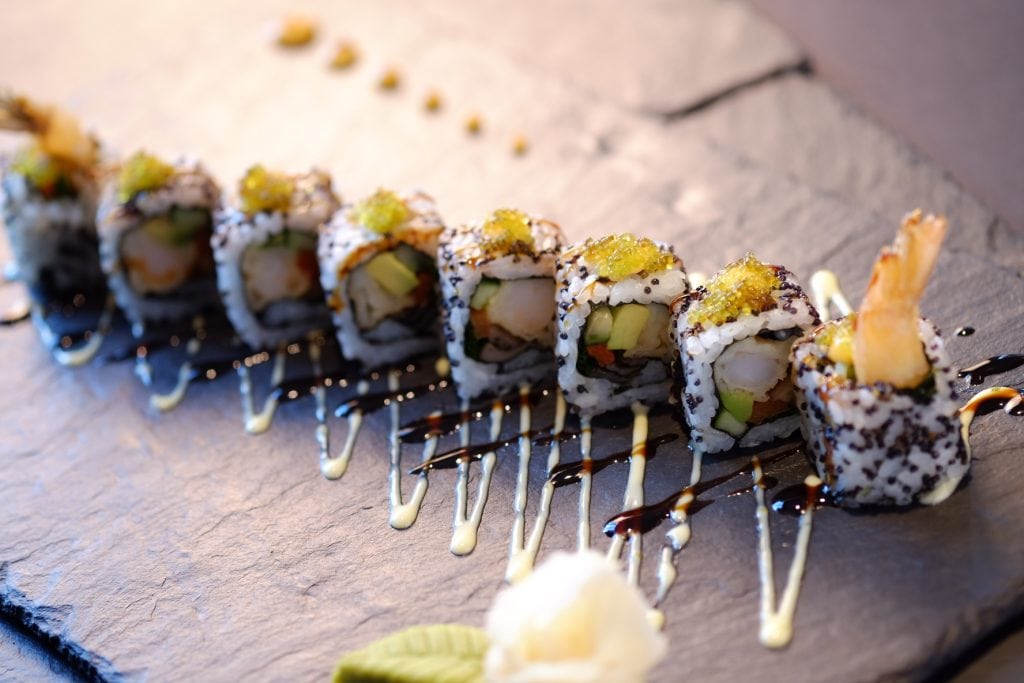 The problem with the term ‘Pan-Asian’ is the somewhat stereotypical model of a restaurant that often takes various dishes and techniques from the likes of Japan, China, Malaysia, Thailand and Vietnam and crams them all into the same shallow pigeonhole, often ending up with a result that’s less than authentic.

Opened on the ground-floor at the back of Oxford Street’s huge Debenhams store, with an entrance directly opposite MEATliquor, Chi Kitchen is a ‘Pan-Asian’ restaurant with a menu that’s overseen by MasterChef 2014 winner Ping Coombes. Inside, the room is punctuated by plenty of natural light from the floor-to-ceiling windows opposite which chefs work from a semi-open kitchen. The whole space is a far-cry from the canteen-style restaurants often associated with high street department stores, which is (of course) no bad omen.

To begin our lunch, we’re recommended a slate of westernised inside-out sushi rolls, filled with vegetables such as red pepper and asparagus then topped with slivers of either slightly overcooked prawns, lightly seared tuna, or indeed both. There is constant assurance that the fish is of the very best quality, which is not doubted, though it does seem odd to use sashimi grade fish only to commit the cardinal sin of introducing it to a hot frying pan.

A sharing starter platter that showcases a number of fried dishes is a contemporary take on Chinese Hors d’Oeuvres, of sorts. Bite-sized popcorn shrimp are well-seasoned and cooked well, while the smoked chicken has become dehydrated in the cooking process. The shredded meat filling of the duck spring rolls is also completely dried out, tasting as though they’d been sourced from the frozen party food aisle of a supermarket. Much better are prawn spring rolls that resemble a twist on sesame prawn toast. Here, conversely, it is the whopping amount of prawn paste that outweighs the carbohydrate element of the dish (sesame seed-topped filo pastry as opposed to bread) quite fortunately.

Although Chinese cuisine is typically pork heavy, with China’s pork imports having soared this year, there is none on the menu here. The exclusion of pig is, in this instance, understandable given that all meat served is Halal, but the use of chicken in place of traditional pork within the siu mai dumplings is bizarre. Fatty pork and plump prawns work in unexpected perfect harmony, while chicken is by nature drier and on far less friendly terms with prawns, making the match seem outrageous when considering that so many other dishes could have been made (even quite deliciously) with chicken, all without adjusting such a classic.

Chosen from the ‘Large Plates’ section of the menu, a liberal tranche of sea bass is dressed with potent lime and lemongrass. The fish is cooked beautifully with such care and precision, though it is served with the skin still intact at the bottom of the plate. As a result, the skin resembles a limp, wet sock. Elsewhere, Thai green curry looks like a pool of algae, littered with chunks of wrinkly old men. Fortunately, the taste is far more pleasant (or so I would imagine) and although the lumps of chicken are overcooked and thus slightly tough, balance comes with the deep green sauce rich with Thai basil, presenting an incredible depth of flavour and harmonic spicing that’s seldom found in London. A bowl of sambal prawns is the best thing we eat here, by quite some margin. A generous helping of prawns (as expected for £17) are accompanied by a deep, vibrant red Malaysian sambal paste that hums with chilli, ginger and a hit of rice vinegar.

Though dishes are somewhat hit and miss, the better dishes sampled are generally gratifying. What’s more, this addition to Oxford Street’s Debenhams is still a welcome relief from the Hospital canteen-style restaurants often associated with High Street department stores.