By David de Winter, Sports Editor, @davidjdewinter  @TLE_Sport I have an intense dislike of the Westfield Shopping Centres in London.  In fact, make that any shopping centre in the world. With their fancy stores placed side by side, imploring the general public to buy, buy, buy, they embody everything that is wrong with the modern world. […]

by David de Winter
in Food and Drink, Restaurants 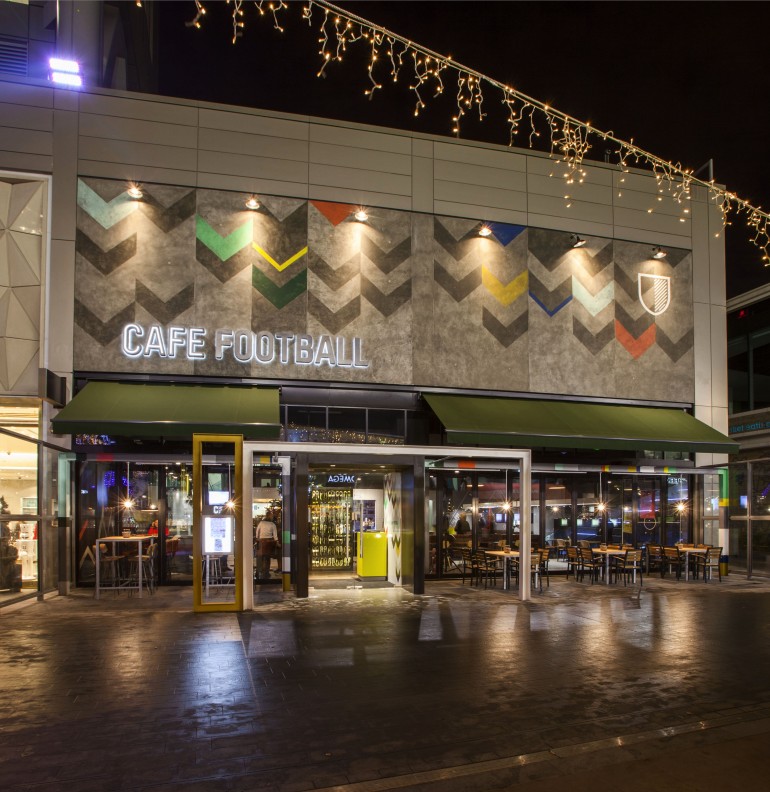 I have an intense dislike of the Westfield Shopping Centres in London.  In fact, make that any shopping centre in the world. With their fancy stores placed side by side, imploring the general public to buy, buy, buy, they embody everything that is wrong with the modern world. It is mass consumerism at its most acute. Ah but of course, I almost forgot; the more things I buy the happier I am. Everyone knows that. Silly me.

So when the bigwigs at TLE suggested I go and review Café Football in (yep you’ve guessed it) the Westfield Shopping Centre in Stratford, it was with a certain reluctance. The only reason I agreed to go was that Café Football is, exactly as it says on the tin, a football café (in fact it is more a football bar/restaurant): I like football, I like food, I like drink. So in theory I should like Café Football, right?

Now when I normally watch football on the TV in bars it is usually with a pint or two sitting in front of a communal TV, or stood in a crowd with my face perilously close to a fellow fan’s armpit with half my pint spilled on my trousers. At Café Football, my guest and I were afforded the unfamiliar luxury of being seated at a table with our own personal TV to watch the Champions League 2nd leg – Real Madrid v Juventus. We were lucky enough to be served by the wonderfully attentive Bruno (his only negative is that he supports Real Madrid, but I let that one slide).

Café Football has a surprisingly good selection of Beers from around the world (it even brews its own).  Obviously, in the name of research dear reader, we had to try all the ones we were unfamiliar with, of which Coopers Pale Ale from Australia was our favourite.

What of the food? The menu at Café Football is inspired, appropriately enough, by food from the terraces.  Pies, an extensive Burger list, Pot Noodles, Sausage Rolls, Cuppa Soups all feature alongside a selection of Pizzas (the Goal and Zola was my favourite pun of the evening) and various hearty pub-style dishes. We started with the Salt Chilli Squid (which was definitely not lacking in Salt) and the Treble Pies, of which the Chicken was best.

For mains, in order to feel like were really at the football, we ordered Nev’s Noodle Pot, a CF Sausage Roll and a Chicken Curry Pie. Not being a sausage roll fan I wasn’t bowled over but my guest was insistent that it was delicious. The Chicken Curry Pie was good but I preferred the Noodle Pot. Having never sampled a Pot Noodle before in my life (something I’m very proud of), this upmarket version was a winner in my eyes and also provided some much-needed Vegetables. This was all washed down with a very nice bottle of Australian Cabernet – Petit Verdot.  Despite feeling more stuffed than a Christmas Turkey we managed (somehow) to find room for dessert. The Turf (a Chocolate Cake made to look like turf) was delicious and moist whilst the enormous Vimto Trifle was hearty.

Despite the good food and drink, the concept of Café Football doesn’t quite work for me. Sitting down to enjoy a three course meal, whilst watching football, is a rather alien experience. I like my football to be honest and proper – I prefer watching non-league football live than the Premier League and I prefer standing on the terraces to sitting. The whole evening felt as if I was in a corporate box instead of in the stands with the masses – thankfully there were no Prawn Sandwiches on the menu so I was safe from Roy Keane’s wrath.

Whilst I can understand the concept and appeal of Café Football, it was not my sort of thing. This is not to say the food was not done well, which it was. At least if ever have the misfortune of being dragged along again to the Westfield in Stratford I know there is one place I can escape to. However I will be going back to watching football in a crammed bar, spilling my pint on my trousers with a wry smile on my face.