Whether you’re a fan of heavy music,  music photography, or both, chances are your gaze has fallen on the work of Paul Harries. With his exhibition, ‘Slipknot: Dysfunctional Family Portraits’ going strong at the Strand Gallery and the photo collection of the same name seeing a release earlier this week, now is a busy time for […] 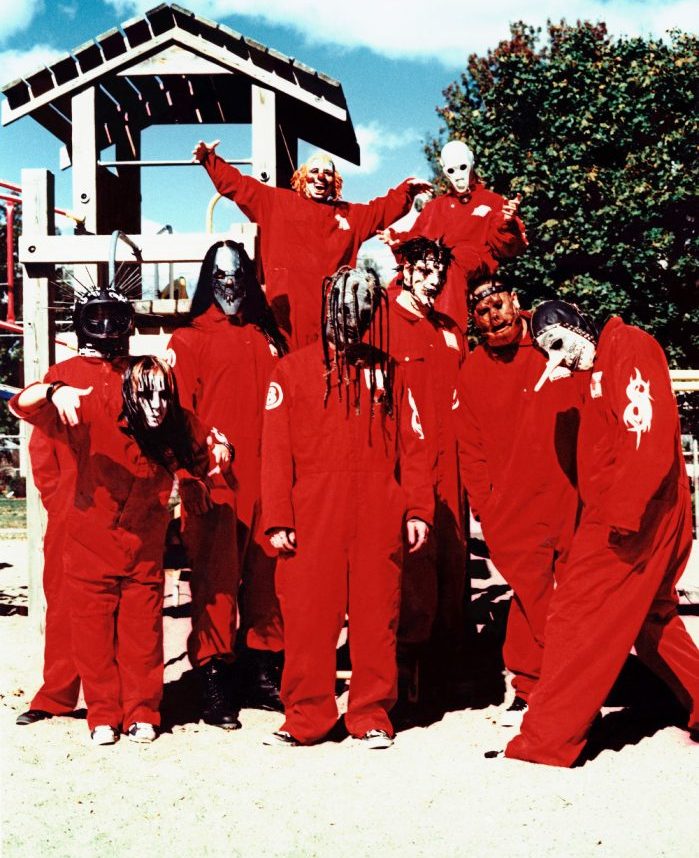 Whether you’re a fan of heavy music,  music photography, or both, chances are your gaze has fallen on the work of Paul Harries. With his exhibition, ‘Slipknot: Dysfunctional Family Portraits’ going strong at the Strand Gallery and the photo collection of the same name seeing a release earlier this week, now is a busy time for the Kerrang! regular. Paul kindly took the time out of his hectic schedule to chat to TLE.

We talk photography, life in the ‘knot inner circle and, worryingly, jars of dead animals…

TLE: Hi Paul! ‘Slipknot: Dysfunctional Family Portraits’ is out now. What made you decide to put this collection together?

Paul: Well I did an exhibition of Slipknot photos about four years ago. I spoke to their manager about bringing all the photos I had of the band together and he said I should do it. That was really successful, so from there we thought it would be a good idea to put out a book. Once I was green-lit by the band we were away.

TLE: How long did it take for the whole project to come together?

Paul: The band were continually evolving as we were working on it t. I wanted to put the newer shots in so it took quite a bit of time! Because Slipknot came out with a new album at the end of last year I wanted to include pictures from that era in the book as well so we held off a bit. The most recent pictures included in the collection are from when they played in London in January. From signing the deal with the book company it took about two years.

TLE: Excellent. Obviously with the release of .5: The Gray Chapter you had a new set of masks to photograph.

Paul: Exactly. I didn’t want the book to be missing the latest set of masks. I wanted the collection to be as up to date as possible.

TLE: You’ve been shooting Slipknot for over a decade now. What is your favourite photo to come out of that time?

Paul: I took a picture of Corey Taylor standing in a field from the ‘All Hope Is Gone’ cycle. I’d say it’s not just my favourite Slipknot picture but also my favourite picture that I’ve ever taken. I love that shot.

TLE: What was it like being around the band after the death of Paul Gray?

Paul: That was really strange at times. I went out to Athens to shoot their first gig without him and they were happy for me to be back stage but it did feel quite intrusive. They know that I would only ever treat them with respect but there were points where I thought that if I intrude any more I’m over-stepping the line. Some touching pictures came out of that time. There’s one of just the eight of them going on stage and that moment was very bizarre.

TLE: Slipknot have an intimidating image and make intimidating music. What are they like to be around in person?

Paul: I suppose in the early days when they were a little bit crazier it was more intimidating, hitting each other to get themselves in the right mood for a show and things like that! They’ve calmed down since then, fewer strange things happen. I remember fans giving them some weird gifts in the past. There’s a picture in the book actually of someone giving the band a jar of dead chicks at a record signing. I think there was a rumour at the time going round that they would smell dead animals before going on stage – whether that’s true or not I couldn’t say – but someone definitely thought they would appreciate the gift!

TLE: What is the vibe like in the Slipknot camp? With Paul’s death, Joey leaving and the two new members has the atmosphere changed?

Paul: I’ve shot them four times with the new line-up and I was surprised at how well the new members have fitted in. It is strange that Joey isn’t there but once the show’s up and running you quickly forget it. It still feels like Slipknot.

TLE: There have been rumours going around as to the identities of the new members. I don’t suppose you could tell us who they are? I have to ask!

Paul: Oh I couldn’t say. I could tell you but I’d have to kill you, put it that way!

TLE: Duly noted! Do you have any tips for budding gig and music photographers looking to get into the business?

Paul: Equipment-wise you really need to have an SLR. The lighting at concerts isn’t what cameras are used to shooting so when you’ve got those bright stage lights you need to override the controls and an SLR will let you do that. As for getting practice, start with your local bands and try to get local gigs. You want to be well-versed in using the camera in that situation before you start going after photo passes and the bigger bands. It’s better to be prepared! I used to sneak my camera into concerts and just get on with it. Being able to take pictures of a band off-stage is also a real skill. I enjoy doing that more than the live pictures. You don’t need a studio or lighting to get a good shot and it gives you the opportunity to be more hands-on and creative.

TLE: I’ve seen a lot of your work in Kerrang!, particularly the cover features with Biffy Clyro, My Chemical Romance and Green Day. How do you get your subject in the zone when you’re on a shoot?

Paul: I think a lot of it is collaboration. If you can get the artist on-side with an idea you usually get good results, but getting to the artist directly is the challenge! Sometimes you can have a great idea but if it has to be explained to the band through someone else there’s usually more resistance. Being able to explain your vision in person certainly helps; that way you can build trust with them and they can see that you aren’t trying to make them look stupid!

TLE: You have been running an exhibition of the ‘Slipknot: Dysfunctional Families’ collection at The Strand Gallery alongside the release of the book. How has that been going so far?

Paul: Yeah it’s been great. I was there on Saturday (9th May) and it was really good to see people coming in and having a look. I got to sign a few books and posters which was nice but mainly it was fun just talking to everyone about Slipknot and photography all day. I’m going to be down there again actually for the final day (17thMay) just to hang out and see everything off.

TLE: What do you think the next 50 years has in store for photography?

Paul: Everyone is starting to do video now but I think there is still a great deal of value in a still image. You can capture a moment; a bit of rock ‘n’ roll iconography. Sometimes the right shot just has that impact that video lacks, and that will be what you want to hang on your wall.

TLE: With the book launch and the exhibition coming to an end what’s next on your calendar?

Paul: Well I have a shoot with 21 Pilots coming up for Kerrang!. I’m also going to have a studio set up at Slam Dunk Festival which I’m very excited about. I’ll be shooting lots of backstage stuff as well as a tattoo feature so there’s plenty coming up keeping me busy.

‘Slipknot: Dysfunctional Family Portraits’ is out on Omnibus Press and is available to buy here. The exhibition is running at The Strand Gallery from 6th – 17th May. Paul will be visiting the gallery on the final day so stop in and say hello!