Set across two floors of a stunning structure just off the famous Bund area, David Beckham propped up the bar of the Haig Club Shanghai sporting designer stubble and a scooped up retro quiff as a guestlist of actors, actresses and models filtered in to taste what Beckham himself has dubbed a “modern and stylish […] 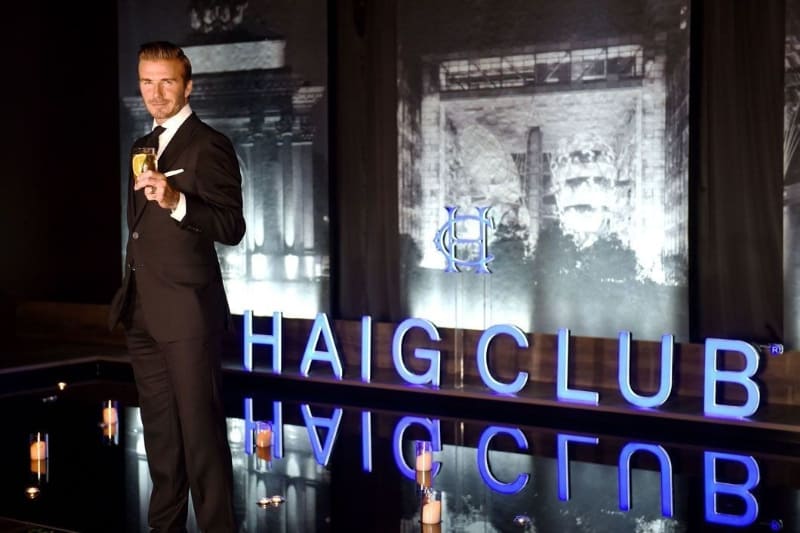 Set across two floors of a stunning structure just off the famous Bund area, David Beckham propped up the bar of the Haig Club Shanghai sporting designer stubble and a scooped up retro quiff as a guestlist of actors, actresses and models filtered in to taste what Beckham himself has dubbed a “modern and stylish new Scotch Whisky”.

That much I can’t argue with. The oversized, blue-tinted perfume-esque bottle would certainly add a new dimension to your whisky shelf, and it sort of semi-fits with the history of the House of Haig which was once renowned for its Dimple Bottle, or Dimple Pinch in the USA.

Haig Club is a blend of first-fill, rejuvenated and refill bourbon barrel-matured whiskies to create a Single Grain Whisky in the at Cameronbridge distillery 30 miles north of Edinburgh. It has a smooth – or tasteless, depending on how you interpret it – taste with notes of butterscotch, vanilla and a little spice on the finish. It is an accessible dram, in the same way Tesco Value whisky offers few complexities.

Granted the branding is clever, but you can’t drink a brand and at £45 a pop you should be investing in flavour. Of which there is very little. In many ways it tastes like a University punch before you add the juices. Cheap vodka meets cheap gin meets cheap whisky to create a diabolical assault of the senses. To pick a comment from Master of Malt, it is “Glasweigen gripe water” to be drunk “as punishment for being taken in by shiny trinkets”.

For the same price you can invest in some really top-noch 12 or 16 year-old whiskies. If it’s blended you’re after, Haig Gold Label (not the same distillery) is half the price and tastes twice as good with smoky and peaty flavours on par with most single malts. The old-fashioned brown bottle may not be as aesthetically pleasing as you like, but this is a full-bodied and truly flavoursome blend.

On the branding front, it’s not just Haig Club that are shaking things up. Progressive Hebridean distillers Bruichladdich sells their ‘Classic Laddie’ in a bold aqua-blue bottle or my personal favourite Octomore in a jet black elephant’s trunk-shaped bottle.

And guess what, you don’t even have to buy shit whisky to get good marketing. Lagavulin released this beaut late last year, although if I’d been wooed by a big blue bottle, I’d be writing more apology letters than placing new orders.