Shades of Spielbergian energy cast an endearing silhouette over this airy but assured big-screen adaptation of Spain’s much-loved 1950s comic book series ‘Zipi y Zape’; an affectionately adventurous vigour that matches the irresistibly mischievous vim of José Escobar Saliente’s original strip. Sent away to summer school as a punishment for their unruly behaviour, the titular […] 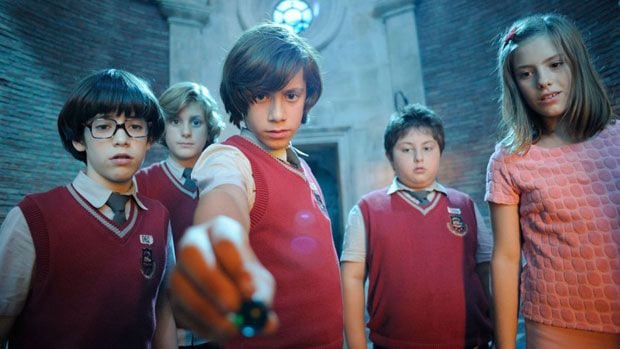 Sent away to summer school as a punishment for their unruly behaviour, the titular twins (Raúl Rivas & Daniel Cerezo) find themselves at the mercy of an oppressive teaching establishment that forbids all forms of recreation & entertainment. Determined to rebel, the pair band together with a number of other students to form the Marble Gang, who set about plotting to defy the rule of the school’s evil headmaster, Falconetti (Javier Gutiérrez). Soon, however, the Marble Gang find their friendship tested in unexpected ways, after a secret discovery leads them towards a mystery that’s hidden deep within the walls of the school.

Director Oskar Santos’ 2010 debut film, For the Good of Others, was never made available in the UK, and indeed the release of this subsequent feature has been so protracted – it first premiered at the Toronto Film Festival back in 2013 – that a follow-up has already been released in its native Spain. And though it feels like a shame that we’ve had to wait so long, full credit must go to the film’s distributor, Soda Pictures, for bringing this wildly entertaining romp to our shores.

Santos directs throughout with an infectiously thrilling exuberance that pitches itself somewhere between the intrigue of Enid Blyton’s ‘Famous Five’ novels, and the mirth of Richard Donner’s The Goonies – with flavours of Indiana Jones, and visual nods to Chris Columbus’ early Harry Potter films also added into the mix. Disarmingly puckish performances from the youngsters effortlessly hold our attention, but it’s Gutiérrez who steals the show as Falconetti, whose appearance looks like a composite of a Nazi officer & Dr. Evil’s Number 2. Roll on the sequel!

Zip and Zap is in cinemas from Friday March 31st.