By Stephen Mayne @finalreel A montage near the end jumps through a diverse collection of fans explaining what heavy metal band X Japan means to them. Aside from adoration in their homeland, others from around the world express admiration, ranging from people who used their music to deal with dark emotions to an elderly woman […] 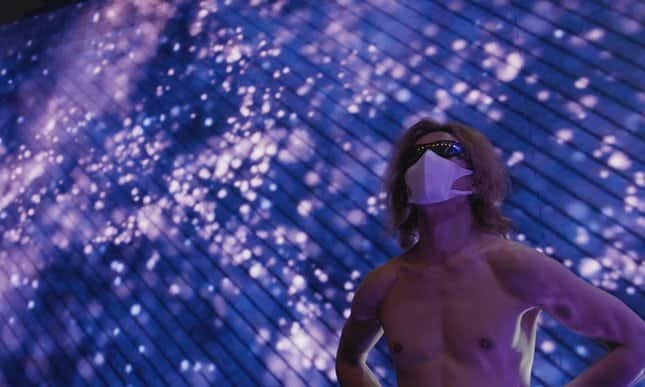 A montage near the end jumps through a diverse collection of fans explaining what heavy metal band X Japan means to them. Aside from adoration in their homeland, others from around the world express admiration, ranging from people who used their music to deal with dark emotions to an elderly woman attending her first concert since Elvis. It’s a hint of what could have been in a shallow and otherwise amiable documentary that skates through the history of the band.

We Are X is really one of those fans in the montage, happy to simply bask in the presence of a group estimated to have sold over 30 million records since the late ‘80s. They pioneered a style known as visual kei, an approximation of glam rock, inspired countless imitators, and created a phenomenally committed fan base. Stephen Kijak’s documentary rides over all of this plus cults, suicides, and a litany of music related injuries.

What it doesn’t do is delve deeper. It’s almost like watching an obituary, only without the unhappy ending. Key points are ticked off via interviews and archive footage, moving swiftly on when more detail is needed. The decision by lead singer Toshi to effectively join a cult for a decade is given very little time, as are notable deaths in the band. Personal lives are left out and inter-band relationships rarely come up.

Much of the focus is on songwriter, drummer, and pianist Yoshiki. A thin, almost frail man, he’s softly spoken and reticent. Kijak fills the gaps he leaves with strikingly shot concert footage, all slow-motion and blue neon lighting. The sight of Yoshiki and his band tearing about the stage comes with its own energy, and when he collapses on the floor (it turns out they keep a stock of oxygen tanks around as he nearly kills himself through over-exertion), collective breath is required.

After a while though, the over-use of such footage, and seemingly aimless shots of the band wandering about on their world tour starts to drag. This might have been enough had the band proved a dull proposition, but there are far more stories going on than We Are X is willing to discuss. It seems content to be nothing more than a pleasing diversion, and a reward for existing fans.

We are X is released in cinemas on March 2nd.