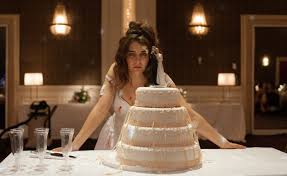 Revenge, traditionally a dish best served cold, proves anything but in Damián Szifrón’s Oscar nominated Argentinian anthology. Featuring six instalments of absurd vengeance, Wild Tales is jammed full of over the top characters, rash actions, malicious intent and rage. So much rage. Evidently, life in present day Argentina has left everyone on the verge of explosion as otherwise normal people are pushed too far. This is comedy of the darkest variety, often straying close to psychological terror without losing its sense of humour.

The tone is set in the prologue that sees a model boarding a plane to fly to the chance of a lifetime. Striking up conversation with an older music critic across the aisle, it soon becomes apparent that they share a connection with her ex-boyfriend Gabriel Pasternak. Coincidences mount as others speak up claiming to know Gabriel. A show of hands reveals numerous people who crossed his path, all to his detriment. Ending with a bang, Szifrón rolls the opening credits before launching into five similarly demented tales.

The Wild in the English language title is certainly apt. Aside from the unlucky plane passengers, he gives us a waitress confronting the loan shark who ruined her family, a tragi-comic showdown on a deserted country road, one engineer’s battle with a towing company, the perils of drunk driving and a wedding that will definitely live long in the memory for all attending. Especially the person who gets spun violently into a giant mirror.

There’s no continuity between each story aside from the theme. Where anthology films can lead to unlikely contrivance as obscure links are sown in, Wild Tales is content to let each segment stand on its merit. And stand they all do. Even the weaker efforts are crafted well. And the best offer ridiculous laughs. The highlights include a weary fight in a crashed car as two grown men try to batter each other at close range with a fire extinguisher and a tyre iron, and the complete breakdown of a wedding as destroyed cake and blood mingle together on the floor. There’s also the chance to watch the sublime Ricardo Darín in action, this time as an explosives expert who takes a vendetta against corrupt local services well past the point of angry letter writing.

Szifrón wastes no time on subtlety. He seems eager to leave it all out on screen with brash characters engaging in the most outrageous of actions. The fun comes trying to guess who’s going to be madly pursuing revenge and why. And at no stage do the end results disappoint individually. If there’s a flaw, it builds cumulatively. Six in a row simply becomes too much. With no real carry over, it’s all more of the same. It turns out a little revenge goes a long way, and by the time the umpteenth person has let rip on those blighting their lives, a craving for human kindness starts to take over

Wild Tales is certainly no advert for life in Argentina, unless you delight in a deranged approach to the daily grind. Either way, settle in for a gleeful two hour journey into the depths of the human psyche. If Szifrón paints an ugly picture of modern life, he does so with a wicked grin. The same grin in fact that you’ll find plastered across your own face by the time he’s finished.

Wild Tales is out in cinemas from Friday 27th March and on Demand.