By Anna Power @powersfilms Following on from his success with Dallas Buyers Club Jean-Marc Vallee directs Wild, a tale of grief, hurt and healing, literally one step at a time. Reece Witherspoon gives a striking performance as novice, lone-hiker Cheryl Strayed (based on her memoir) who undertook the precipitous 1,100 mile journey through the wilderness […] 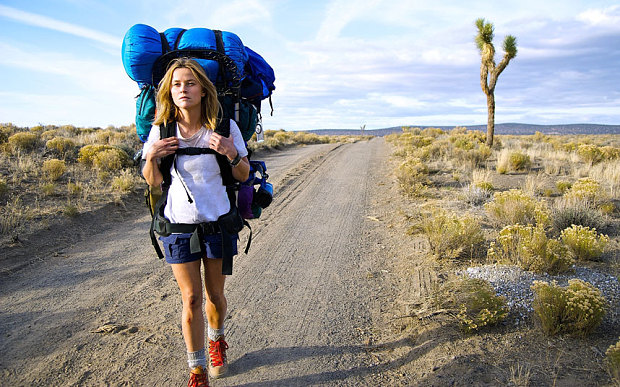 Following on from his success with Dallas Buyers Club Jean-Marc Vallee directs Wild, a tale of grief, hurt and healing, literally one step at a time.

Reece Witherspoon gives a striking performance as novice, lone-hiker Cheryl Strayed (based on her memoir) who undertook the precipitous 1,100 mile journey through the wilderness as the ill-thought-through solution to a car-crash rock bottom, resulting in the breakdown of her marriage and subsequent divorce.

Donning freshly pressed hiking trousers and unworn brand new boots, she packs her rucksack, making all the classic rookie mistakes: – she over-packs carrying all bar the kitchen sink –her bag weighing as much as her (hikers nickname it ‘the monster’), she hasn’t taken her brand new camping equipment out to test it and all her stuff is still in the packaging – including her tent. As she starts to walk, her thoughts, initially full of fear, quickly become riddled with expletives as fatigue and frustration sets in and she asks herself the proverbial question: “What the fuck am I doing? “.

Like the barrenness of the desert trail, Vallee doesn’t over-indulge us with information about Cheryl’s checkered past, instead we hear her thoughts as she walks, her story told through memories as they emerge, bubbling up to the surface, sometimes forcefully, like waves crashing against rocks and at other times, gently caressing her; Cheryl’s truth unfolds in flashbacks, disjointed ramblings, mellifluous melodies and fragmented images which are subtle, raw and powerful. Each footstep becomes significant in her catharsis as clearly she is carrying more than a rucksack as baggage. Her walk is punctuated with images of her mother’s sudden, untimely death, the catalyst that drove her to dive headfirst into sex and drug addiction to assuage her agony. In a memory, talking to her friend about her dissonant decision to walk the trail, she says, “I don’t know when I became such a piece of shit “

You can’t walk out into the desert alone without being willing to face yourself -there are no TV screens, computers or stereos to distract you from you. Despite the barren expansive vistas and a thousand miles of perilous wilderness to face, clearly this potentially treacherous challenge doesn’t compare to the battle being fought inside Cheryl, although there are some pretty tricky situations that come up, which Witherspoon conveys with unaffected authenticity.

I really liked Wild and I was pleased that the film avoided obvious flourishes and affectations, remaining with the barebones often monotonous, repetitive nature of this extraordinary story. There was perhaps the potential to go a little deeper into her suffering and its emotional consequences though it packs an emotional punch as it is.

Wild is premiering at this year’s London Film Festival and is on general release in the New Year.