By Stephen Mayne @finalreel To the uninitiated, the world Todd Solondz has set out over the course of eight features must appear a baffling one. It’s likely to be just as confusing to those who have stumbled across work stretching back nearly three decades. Wiener-Dog continues his merging of bone-dry humour and startlingly underplayed drama […] 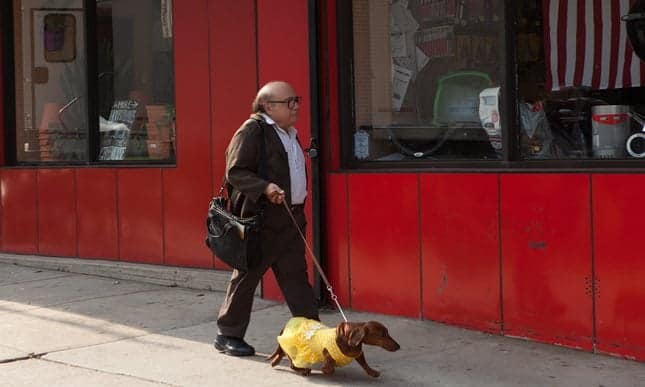 To the uninitiated, the world Todd Solondz has set out over the course of eight features must appear a baffling one. It’s likely to be just as confusing to those who have stumbled across work stretching back nearly three decades. Wiener-Dog continues his merging of bone-dry humour and startlingly underplayed drama resulting in an anthology piece of varying success.

The one constant across four stories is the wiener dog of the title, a passive observer thrown from owner to owner as a ragtag collection of people struggle to deal with wasted chances, poor decisions and an urge to be free. The dog first appears at the expensive and soulless house of a young cancer survivor (Keaton Nigel Cooke) and his bickering parents (Tracy Letts and Julie Delpy). After a series of mishaps he goes on a bittersweet road trip with Greta Gerwig (playing a returning character from Solondz’s breakthrough Welcome to the Dollhouse), appears with a thwarted screenwriting professor (Danny DeVito), and finishes with a difficult retiree (Ellen Burstyn) in the midst of a rare visit from her granddaughter (Zosia Mamet) and her brash artist boyfriend (Michael Shaw).

As is so often the case with anthologies, the quality proves uneven. The second half stands much stronger, particularly a careworn DeVito struggling to reconcile his desire to create something meaningful with a need to sell, and Burstyn facing a chorus of past mistakes in the shape of numerous versions of herself as a child. Here comedy and drama merge well, arch lines prompting smiles even as they hit emotionally.

Earlier on the balance doesn’t quite work, aside from an inspired over-exaggeration from Delpy as she explains what can happen to an un-spayed dog in brutally inappropriate terms. Solondz’s specialty is the stretching of mundane situations through odd occurrences and absurdly unacceptable dialogue. When it works, as it does in the latter two stories, the effect is striking. Initially, particularly in Gerwig’s flat adventure, the mundane is simply boring, efforts to elevate it coming across forced.

The tight control Solondz employs on everything from line delivery to shot composition hampers these moments, putting an extremely talented cast in straight-jackets too often. It takes a certain kind of story, working best when it involves characters reflecting back on life with all its minor and major humiliations, to succeed. Burstyn’s throwaway line describing a bit of pornographic modelling in her youth is as funny as DeVito’s rock-bottom declaration of love to a distant agent is tragic. The tone in both is then expertly flipped as Burstyn is mocked by past mistakes and DeVito gets his own back with an improvised bomb jacket, all without the formal style changing at all.

This leaves Wiener-Dog a mixed bag: good when it’s good and mediocre when it’s not. If that doesn’t sell it, a hilariously over-the-top intermission and a very cute dog are there to paper over cracks.

Wiener Dog is out on DVD and Digital from January 23rd.