Overwhelming problems face Tamsin in Katherine Soper’s debut Bruntwood Prize winning 2015 play. Her younger brother Dean has Obsessive Compulsive Disorder and cannot leave the house. Even so his benefits are being disputed and are at risk. The only place Tamsin, lacking in qualifications, can find much needed work, is in a post industrial “fulfilment […] 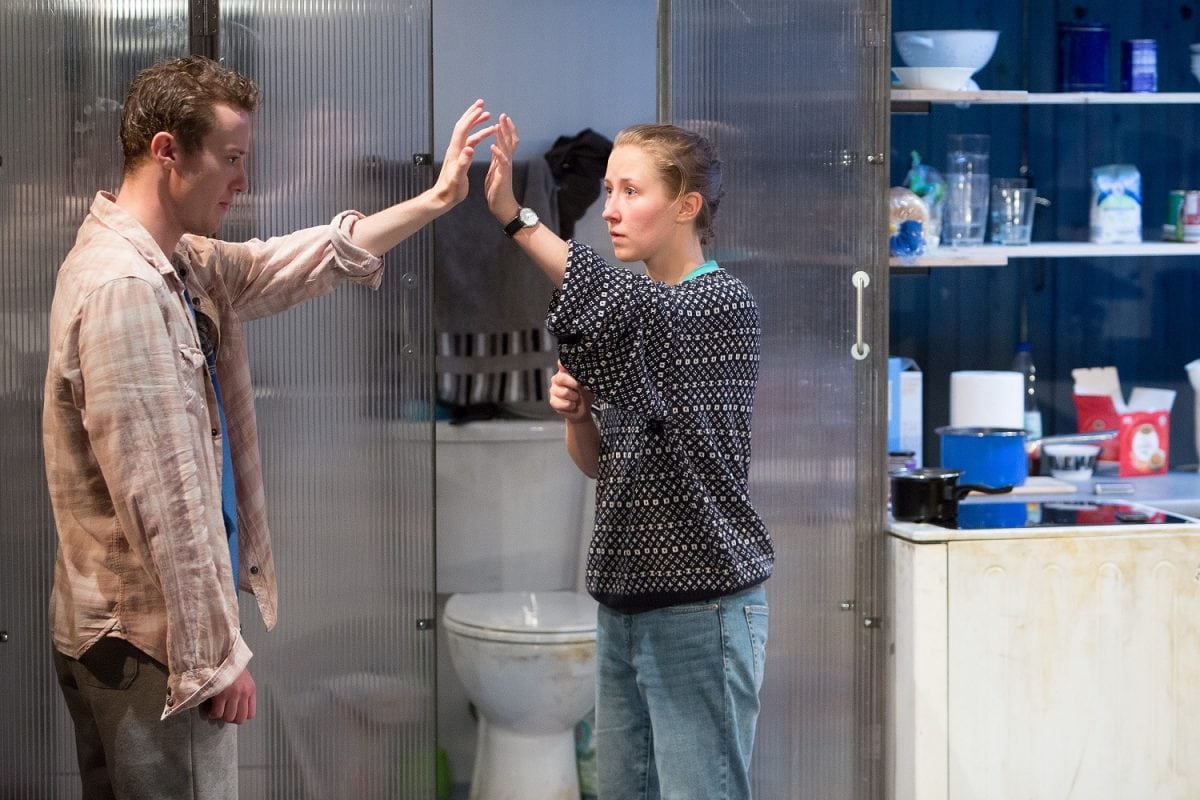 Overwhelming problems face Tamsin in Katherine Soper’s debut Bruntwood Prize winning 2015 play. Her younger brother Dean has Obsessive Compulsive Disorder and cannot leave the house. Even so his benefits are being disputed and are at risk. The only place Tamsin, lacking in qualifications, can find much needed work, is in a post industrial “fulfilment centre” aka a packing warehouse on a zero hours contract. The stresses are many: Tamsin must meet her “targets” in order to be asked back and for the chance to transition to an “associate” permanent post. Her toilet breaks and the length of them are constantly monitored, she has to hand over her mobile phone and pay a deposit for the privilege and she faces a performance review at the end of each day. Not surprisingly, Tamsin is angered by the unfair conditions that suffocate human life and is reluctant to submit to them.

However, this is not just any old social outrage play. Though Tamsin and her co workers can’t walk out even though they bitterly hate the system they find themselves locked into, Soper cleverly gives us all the little ways in which the characters practise workplace resistance. Luke, Tamsin’s soon off to college and wiser than his years co-worker, steals, including a little tea candle he presents to Tamsin. He also illegally covers for Tamsin by taking over her position on the shop floor when she is sick. Tamsin herself, unused to the rules, can’t stop talking and eventually coerces Luke into the same, at the expense of their targets. Even the gruff gaffer, called The Lead, who at the top of the play wears a semi cold corporate veneer, is encouraged by Tamsin’s domestic plight to rebel against the company he works for and to manipulate the rules in his own way.

Not only do the characters rebel, so too does the playwright. Whilst there is focus on the mechanisms of oppression that dominate all of our lives the play weighs heavily in the favour of a psychological drama. Tamsin and Dean’s up and down relationship, where the two fall into repetitive feelings that alternate between frustration and pity and love for each other, is a beautiful and truthful thing to behold. Erin Doherty as Tamsin gives us a young woman who grimaces and grins even as we can see her screaming and kicking inside. Joseph Quinn’s Dean is mindful of Leonardo di Caprio’s early role as Arnie in the film What’s Eating Gilbert Grape: Dean here has the same stillness, the same extremes of moods and Quinn is masterful at getting across how difficult Dean might be to live with and yet how lovable and clever he is. Shaquille Ali- Yebuah as Luke has a harder role. His character is on the way up just as Tamsin might be on the way down. Yet, the two begin a romance. How to pitch it? Luke is all live wire, all hope and energy, lifting Tamsin yet all the while knowing that this probably may not work. There is a moment in the play where all Ali-Yebuah does is look at Tamsin yet you know exactly what conclusion he has reached and it is heart breaking. The Lead reminds us that not all supervisors have signed up to their company’s values and Aleksandar Mikic gives us a portrayal of a man who suffers the same pangs of conscience as Tamsin, but who has made the decision, for the sake of his daughter, to get on with it. It is a pleasure to see the actor change the character’s original resistance towards Tamsin.

On the face of it, the play is harsh stuff, but by no means bleak, as the much written about Meat Loaf scene, for a moment cleverly turned into an ironic comment on Tamsin’s work nightmare by director Matthew Xia, illustrates.

What’s fascinating about this play is its refusal to point fingers too much at anyone in particular. If anything, we are all complicit. The bureaucrats holed up in the job centre are not so much villains as people who were (though probably willingly) hood winked by Dean who down played the extent of his illness at his interview. The company directors, responsible for the oppressive mechanisms at the fulfilment centre, are invisible. On the one hand it means that every character in the play is tainted with the same brush and cannot get out of the system they are in. Xia cleverly illustrates this with repetitive movement: Dean, rewashing and gelling his hair, is paralleled with his sister’s own repetitive physical movement on the production line. Dean and Tamsin share personal tics-the tapping of hands to calm themselves down, stuttering when anxious. Designer Ana Inés Jabares-Pita’s production stations slowly encroach into Tamsin’s home as furniture. The Lead wears the same clothes, says the same words and shows that he too is part of the capitalist system when he steers Tamsin into giving him the answers he needs for her review so that he can keep his job. The only one who is not “boxed” in is Luke. He has found his own way to rebel. It’s funny as well when Tamsin receives her own batch of cheap clothes probably packaged at the same fulfilment centre made cheaply by others suffering horrific work conditions. It says, because of economic need, that it is impossible for anyone to avoid being in the capitalist system we so despise. It’s ironic too when the stolen fulfilment centre candle provides the hopeful and comforting light for Tamsin’s house. The fulfilment centre may be able to help Tamsin but it is conditional and dependent on her need and ability to work of course: therefore what kind of light is it offering?

Whilst I sometimes found the piece lacking in real corporate hostility and the sense of fear that permeates such working environments, the details of the characters’ emotional lives and intertwined stories is, under Soper’s microscopic eye, beautiful and warm. Soper does not give us any answers, but we do feel by the end of it that the characters have undergone their own epiphanies and may find new ways to rebel against the cruel system imposed upon them.

Until 11th February at the Royal Court Theatre