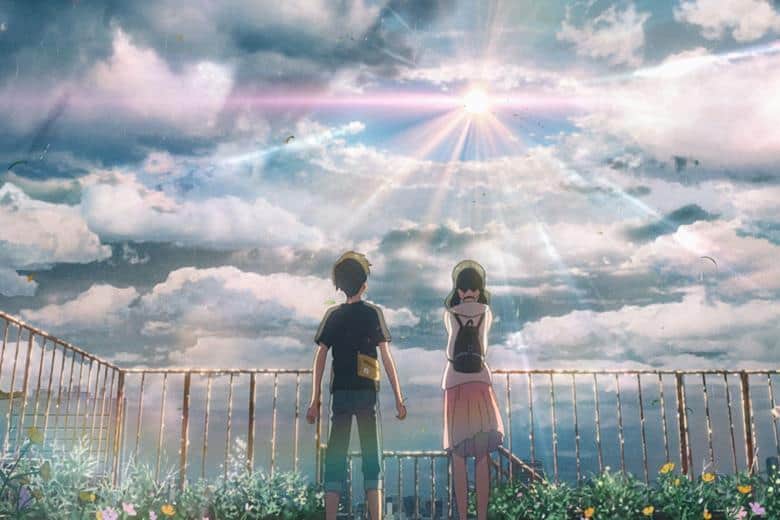 There’s a frequent sense of nostalgia and pensiveness that underlies Japanese anime; recurring scenes of a solemn figure standing alone in some sprawling space, hair flapping in the wind, exaggerated wide eyes underlined with drops of tears. Makato Shinkai’s Weathering With You unabashedly immerses itself in these visual tropes, further evident in the film’s predecessor the highest grossing anime film of all-time Your Name; yet he manages to elevate his offerings a cut above the rest. Whether it’s through the understated bleakness of his subject matter, the celebratory euphoria of youth, his commentary on societal constraints or simply the prettiness of his scribed world. Following the success of Your Name, the bar is set sky-high for Weathering With You, tackling familiar motifs of young love, the climate crisis and the supernatural.

Tokyo is soaked in months, if not years, of uninterrupted torrential rain. Hodaka, a newly runaway teenager, lives a hand-to-mouth existence in the city’s street. Penniless and seeking refuge from the rain, he spends his days loafing around in a McDonalds in the city centre. He catches the eye of young waitress Hina (Mori Nana), who one day kindly offers him a free burger and a reciprocal infatuation ensues. Hina possesses the supernatural powers of manipulating the weather. An ability, she randomly discovered whilst in deep prayer at the foothold of traditional Torii gate, next to the hospital of her dying mother. Hina’s litanies are able to do away with rain clouds allowing for the sun’s rays to seep in. Finding themselves financially struggling the couple devise a clever plan to monetize on Hina’s powers, only soon discover her powers come at a personal sacrifice.

Shinkai’s world is undeniably beautiful, mesmerizing, yet submerged in realism. Whether it be visually; as if almost drawn over and outlined in the vein of films such as Richard Linklater’s Scanner Darkly. Or whether it’s the film’s contemplative occasionally gloomy nature that permeates even in the film’s chirpier moments. Attributed perhaps to the occasional sombre subject matter as well melancholically tinged background of the characters.

Most urgent and poignant scenes are concentrated in the last segment; Hina finds herself relegated to a parallel universe destined to be forever floating in mid stratosphere amongst thick clouds. As Hodaka frantically tries to rescue her, involving a gripping extended chase through concrete grey Tokyo involving the police, social services and a bumpy ride at the back of a friend’s moped. It’s in these moments that the movie comes to life, salvaging it from a tame middle section, as Hodaka’s desperation and primitive instincts surface full throttle.  Once equilibrium is restored, the side-effect is permanent climatic damage for Tokyo; prophesizing a sad state of affairs which Shinkai dresses as a happy ending.

Maybe its unavoidable that Weathering With You will be compared with Your Name, and unfortunately a watered down version at that. I could not shake off the similarities. Whether it be the revisiting of familiar themes and once again centring them around a struggling young love, with literally the same relationship dynamics. And like in Your Name, I found the choice of jarring emo-esque pop songs, loud, highly distracting and incongruous. The supernatural element, a highlight of Shinkai’s storytelling, in this instance feels slightly less; still impressive but lacking in the humour and outlandishness. Yet in no way should Weathering With You be dismissed. Its a joyous film which will simultaneously entertain and pull at the heartstrings.