By Wyndham Hacket Pain Chile had already had 15 years of military dictatorship when in 1988 Augusto Pinochet asked the public to vote on whether he should stay in power or whether there should be a general election the following year. In an unprecedented move the No campaign, which wanted to rid Chile of Pinochet, approached […] 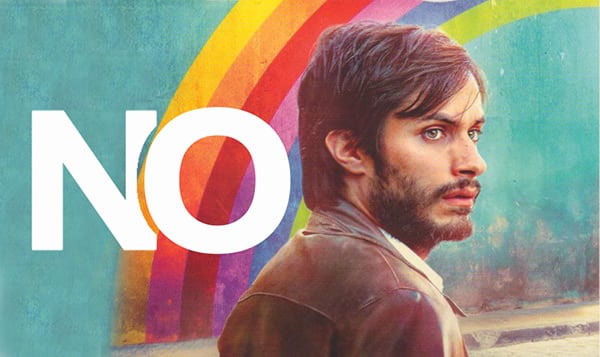 Chile had already had 15 years of military dictatorship when in 1988 Augusto Pinochet asked the public to vote on whether he should stay in power or whether there should be a general election the following year. In an unprecedented move the No campaign, which wanted to rid Chile of Pinochet, approached advertiser René Saavedra (Gael García Bernal) to consult them on the direction of the campaign. Much to the dismay of the campaign’s political leaders, Saavedra decides not to focus on the terrors of the Pinochet regime and instead creates more light-hearted and upbeat material that highlighted the possibilities and hope that the vote could represent. Before long the ads start taking effect and the idea of a democratic Chile begins to feel real.

Of course today the political slogans and carefully crafted ad campaigns are to be expected, but No effectively demonstrated the constraints and internal conflicts that are central to all of politics. Unlike today though, when advertising has seeped so deep into our culture that we are hardly aware that it is there, in 1980s Chile its effects are more noticeable and evident. The role of advertising was still up for debate and the morals surrounding it are openly questioned. It is easy to understand why those at the centre of the campaign believed it was their obligation to highlight the terrors that Pinochet had brought to the country and why the adverts appeared so lightweight to them.

At the centre of No is a strange dichotomy, as the film on one hand depicts the removal of a brutal and cruel dictator, while also demonstrating the corruption of political activism and ideals by spin merchants and commercially orientated advertisers. In one sense Chile is being freed from a dictatorship, and in another its principles have been twisted and taken over by corporate and consumer interests. The propaganda of the Pinochet regime is in turn replaced by another form of propaganda. René Saavedra is a capitalist tool and in many ways represents another kind of tyranny, one where freedom has been reduced to the freedom of consumer choice.

It may seem obvious given the outcome of some recent elections but No above all demonstrates that elections are unpredictable. From the outside it was absurd to think Pinochet’s time in power was about to end, but after the 1988 referendum the once immovable dictator was forced out of power. No may show the messy and contradicted nature of political movements, but it does have one clear message: voting matters.