A Jedi dentist has created a hilarious advert for his practice – by superimposing himself into STAR WARS. Dr Steven Abernathy spliced himself into the epic final scenes of Episode IV A New Hope to advertise root canal laser technology. In the hilarious video, which has gone viral on social media, Steve discussed the process […] 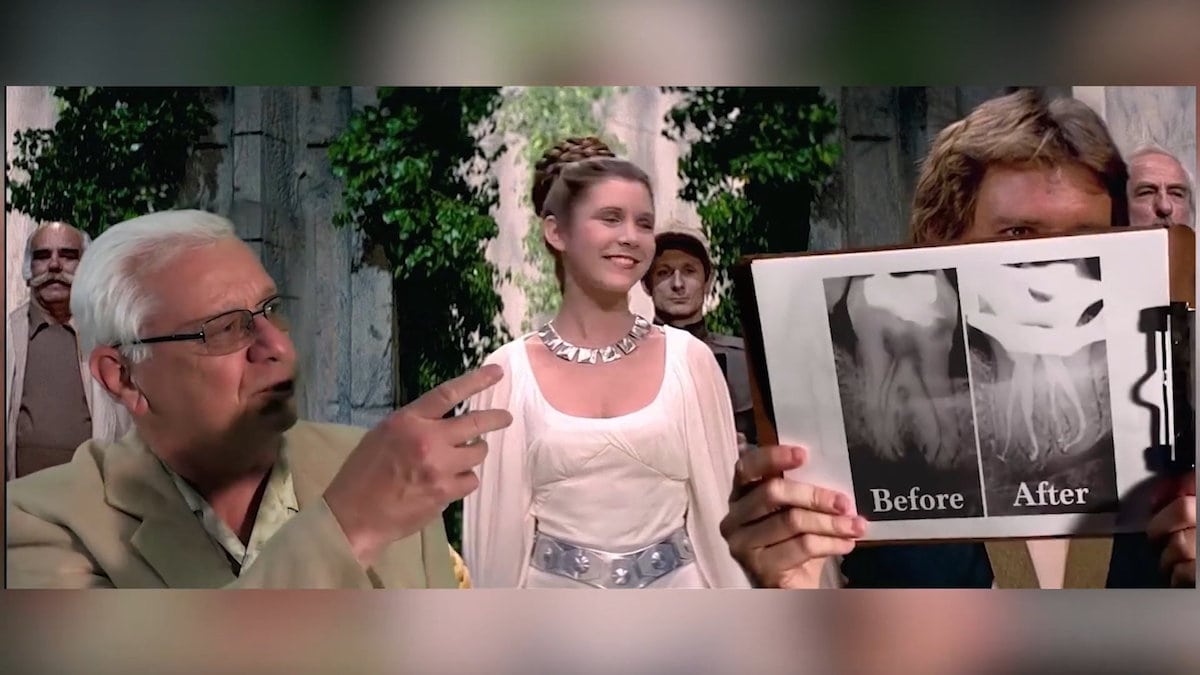 A Jedi dentist has created a hilarious advert for his practice – by superimposing himself into STAR WARS.

In the hilarious video, which has gone viral on social media, Steve discussed the process of clearing an infected tooth with Rebel Alliance X-Wing pilots as they prepared to take on the Death Star.

Steven, wearing a Hawaiian shirt in the 1977 classic, helped launch a trench-run attack on Darth Vader’s troops and declared: “Lasers aren’t just for X-Wings any more”.

The Jedi dentist, from Arkansas, USA, later joined Han Solo and Chewbacca and receives a hero’s welcome from Princess Leia – by taking the role of Luke Skywalker.

During the Death Star battle the hero dentist put away his ‘traditional equipment’ and told mission control lasers gently cleaned out the root with pulses of light.

As Han Solo screamed ‘yeehaw’, Steven said: “You said it Han. Thanks to PIPS root canal treatments are easier and more efficient than ever before.”

He even shared a cheeky smile with Princess Leia before turning round and superimposing Han Solo holding up a chart showing the before and after root canal treatment.

Steven told the Rebel troops: “Look at how well it fixed this insurmountable problem from the dark side.

“You all may have the Force, but I have PIPs.”

The three-minute spoof ends with a ‘Star Wars holiday special’ where the dentist is sat with a Greedo, Rodian bounty hunter, and said: “This is not the celebration I was expecting”.

Steven’s son John, who worked in video production before becoming a university English teacher, shot the video in just a few hours.

John said: “We created the video on whim. Dr. Abernathy belongs to a few online communities of dentists who all share ‘funny’ stuff with each other.

“We thought the video would be something fun to add to the discussion.

“We honestly never expected it to get any more popular than a couple dental-trade discussion boards and our own little corner Facebook.

“We shot it in just an hour or two and it only took a couple of weeks to edit. I’m an English teacher at a state university now, but a long time ago, in a galaxy far away, I worked in commercial video production.

“So I was able to toss this video together pretty quickly during the summer while I didn’t have to worry about classes.”

The video, published on YouTube last month, has been shared thousands of times online.

John added: “Watching the video go viral has been surreal. We never intended for it to be seen outside of dad’s little group of dentist friends.

“It was just supposed to be a goofy little fan film that, at most, he could put on his website to explain a potentially scary dental procedure to patients.

“This sudden popularity is exciting, but it’s a little frightening as well.”