Adam Sandler is at his very best in this outstanding, high-stakes thriller. 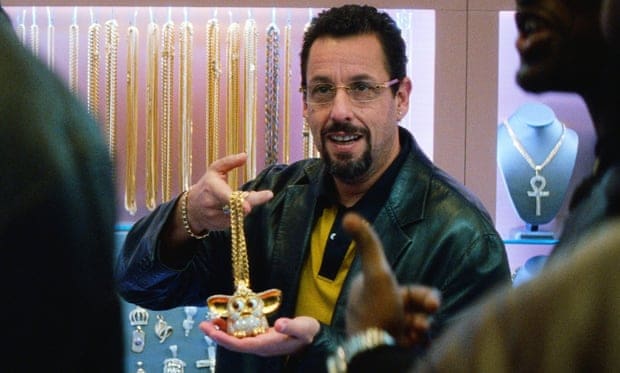 Howard Ratner (Adam Sandler) is a fast-talking Manhatten diamond dealer with a gambling problem who owes big money to loan sharks and he’s in over his head. Sporting dark glasses, a black leather jacket, and a scruffy goatee, Howard is a desperate man, living on a knife edge. As his debt collectors put the pressure on, Howard purchases an uncut gem from Ethiopia that could score him over $1 million. Problem is, Howard’s biggest customer, NBA superstar Kevin Garnett wants the rock for himself, setting in motion a wild ride that spirals out of control.

Directed by the Safdie Brothers, Uncut Gems keeps viewers in a perpetual state of stress and anxiety, thanks to Adam Sandler’s exhilarating performance. Sandler has starred in various comedies over the years, many of which have been ridiculed – but his ‘serious’ work with Noah Buambach and Paul Thomas Anderson unleashed his full potential, showing him to be a versatile performer. He channels that same dramatic energy into Uncut Gems, which follows a similar formula to the Safdie’s breakout hit Good Time, starring Robert Pattinson as a streetwise bank robber. Uncut Gems is much more cinematic, but it still features the Safdie’s signature gritty realism.

The Safdie brothers actually tried to convince Sandler to star in Uncut Gems a decade ago when they first came up with the idea, but he passed on the opportunity. It was only when Good Time shook up the Cannes film festival that Sandler took an interest in the Safdie’s work and finally, the indie directors got their leading man. In Uncut Gems, the Safdie brothers capture the specifics of its world with a nail-biting precision, using a loose plot where every moment feels like a ticking time bomb. There’s a remarkable feeling of dread throughout the film, but every element and detail is brilliantly controlled, and backed by an excellent supporting cast, which includes Idina Menzel as Howard’s wife Dinah, and Lakeith Stanfield as Demany, Howard’s assistant. The electric, pulse-quickening score by Daniel Lopatin serves to crank up the tension while setting the mood for Howard’s maddening journey. All of it makes for an unpredictable film that locks you inside the head of a man who’s on the verge of a meltdown.

Much like Robert Pattinson’s character in Good Time, Howard scrambles for control and never seems to quite know what he’s going to do next. He finds himself taking more and more risks as he tries to raise the cash to pay off his debts – and while we despise his actions, we still root for him, even when he’s placing wild bets and getting chased by the men he owes money to. Sandler has always possessed an innate charisma that makes it easy to emphasise with any character he plays. It’s no wonder the Safdie brothers were so keen to cast him in their film, because only a certain type of actor can play an anti-hero and make it convincing. Howard is always thinking about his next scheme while juggling his duties as a father and business owner, and it’s all staged in a way to put you on edge.

Uncut Gems is a film of pure energy, style and substance, and it always feels like it’s rushing towards something grandiose. You want Howard to succeed. You want Howard to beat the guys who are after him. It’s a momentous thriller and another showcase for the Safdie brothers, who have carved a niche for themselves as masters of hard-hitting, character-driven cinema. Most of all, it’s unflinching and memorable, delivering a truly visceral experience.