By Michael McNulty Paris and New York are more often the cities romanticized on the silver screen, from the gritty streets of the Bronx to the arty cafes of Montemarte. But let’s not forget about the island that sits in the middle and the city at its centre, London. Here are our top five London […] 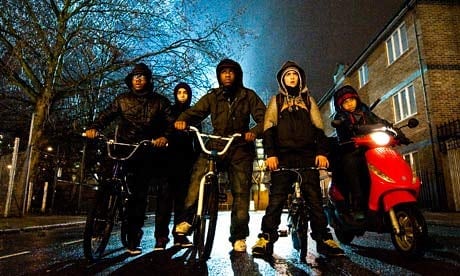 Paris and New York are more often the cities romanticized on the silver screen, from the gritty streets of the Bronx to the arty cafes of Montemarte. But let’s not forget about the island that sits in the middle and the city at its centre, London. Here are our top five London set films. To kick things off, let’s travel south of the river, down Brixton way. Joe Cornish’s directorial debut, a thrill ride of a film that riffs on the genre flicks of the 80s, sees a group of south London youths fight off an alien invasion to protect their tower block. But, don’t let its aesthetic fool you, Cornish’s film isn’t just a horror-comedy romp. No, it’s so much more, as he skilfully blends B-movie tropes with a smart, thoughtful script that addresses the realities of urban life and alienation. This is a chewy film that sports a superb casts – including a young, then unknown, John Boyega. The lingo’s down pat and the alien monsters are a wonderfully terrifying creation. Could anyone forget Ringo’s Charlie Chaplin-esque turn down by the river Thames? Whether you like the Beatles or not, A Hard Day’s Night is undeniable, it’s a rollicking pop-movie, one of the first of its kind, and follows the foursome over the course of a day in London in the lead up to a televised show. Richard Lester made the mould with this film and it perfectly captures the spirit of the emerging youth culture of 1964, its energy and vibrancy as well as a whole slew of London locales. United Artists expected to make a loss on the film and reportedly only made it so they could later profit off a soundtrack release, but the film was a commercial and critical success and has gone on to serve as a fine example of British new wave cinema. Moving into darker territory is Roman Polanski’s second feature and first British film, Repulsion. A horrifyingly sinister film that finds itself in the borough of Kensington. Carole, played by the pitch perfect Catherine Deneuve, is a young Belgian manicurist who struggles with her fascination for sex. Both drawn too and repulsed by the carnal act, her mind slowly begins to unravel leading her down a murderous path. Repulsion has a Hitchcockian quality and could sit comfortably next to Pyscho.

But, where the film really wins is in its blend of realism and surrealism, from the shaky handheld camera work that captures the streets of Kensington, to the spatially disproportionate flat Carole shuts herself away in. It’s tense, hair raising stuff and a scene involving a straight razor not only conjures images of Buñuel’s Un Chien Andalou, but makes for excellent slasher fodder too. Franco Rosso’s south London set film is a quiet masterpiece that is often overlooked. The film follows a week in the life of Blue (Brinsley Forde), a young afro-Caribbean Reggae sound system front man for the Ital Lion sound system crew and captures with uncompromising realism the tribulations of young black communities in London. Babylon gathers momentum like a top loaded truck, with no breaks, headed down hill as Blue, in the lead up to a clash of the sounds competition,loses his job, his girlfriend, and is stopped and beaten by police on a “sus” charge, all of it underscored by continued racial abuse. Rosso has created a film that is balanced and honest and paints a true to life portrait of black culture and experience in late 1970s London. The performances ooze with a naturalism that feels like you’re watching the lives of real people and the soundtrack is immense.

5. Night and the City

London, it’s a tough place, rent, cost of living, and minimum wage, it’s a city where everyone’s had to do a little hustling at least once to get by. For Harry Fabian (Richard Widmark) though, hustling seems to be both a well-honed skill and an affliction. Working as a nightclub tout at the Silver Fox (a bar that were it to exist today would undoubtedly be packed with beardy hipsters and exclusively sell Negronis), Harry seizes an opportunity to take control of the London wrestling scene. In true noir fashion, there’s a lot of plotting and double crossing, soaring highs and crashing lows. Jules Dassin (the American director who fled the States to avoid prosecution from McCarthy’s House of Un-American Activities Committee) creates a London that is a claustrophobic, noirish nightmare, a maze of alleyways and post-war, bombed out rubble, superbly caught in the climactic chase scene at the end of the film. The final shot of the picture from Waterloo Bridge, as Kristo (Herbert Lom), a rival businessmen, flicks a cigarette into the river Thames, is one to behold.